The best way to invest is to find great businesses, and then buy and hold their stocks for a long time -- maybe even forever. That holds true in healthcare as well as in any other part of the market. But because of healthcare's complexity and the risks attached to pharmaceutical stocks and biotechs, many struggle to invest in this huge growth sector.

The good news is, you don't have to buy risky biotechs to invest in healthcare. In fact, you can buy big, well-diversified companies with much simpler business models, including estate investment trusts (REITs). Welltower (WELL 1.18%) is one such REIT. It owns buildings that healthcare businesses lease.

Let's talk through the top 10 reasons, then, to buy Welltower stock and hold it forever.

America is aging rapidly. From now through 2029, roughly 10,000 baby boomers are expected to turn 65 per day. From 2010 to 2050, the 85-plus group in America is expected to more than triple, from 5.7 million to 19 million, according to U.S. Census data. Those two groups are important, because per-capita healthcare spending doubles from the average in the 65-84 age group, and then doubles again for people aged 85 and up. With 70% of its portfolio net operating income (or NOI) geared toward senior housing, Welltower is poised to disproportionately benefit. 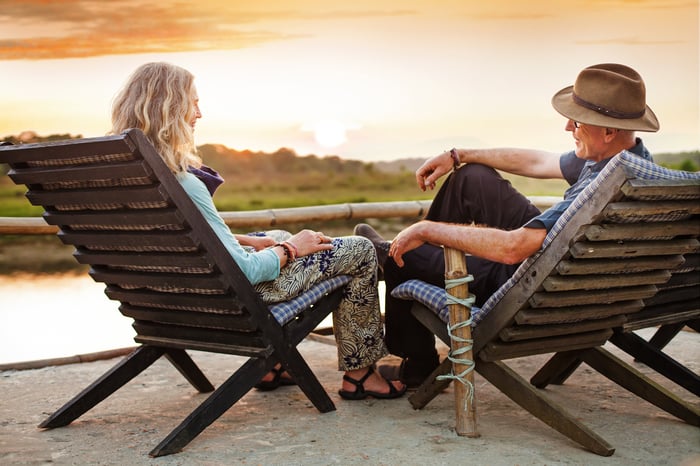 As the population ages, healthcare spending is likely to ramp up significantly. It's already a $3 trillion industry in the U.S., and if you pay attention to the news, you've probably been hearing plenty of ideas for reducing costs. According to the Centers for Medicare & Medicaid Services, care in hospitals -- which provide some of the most expensive care in our healthcare system -- accounted for 32% of healthcare spending in 2015. Welltower is investing in lower-cost post-acute care and senior housing, because care is likely to shift away from hospitals over the long term as our system struggles to contain costs.

Welltower's dividend currently yields 5%. As a REIT, it's required to pay out 90% of otherwise taxable income out as dividends. That means a juicy dividend for income investors. Management has paid 184 consecutive dividends. And the dividend is well covered by funds from operations (FFO, a REIT metric similar to earnings per share, with depreciation and amortization added back in), with a 73% payout ratio based on trailing-12-month FFO, according to data from S&P Market Intelligence.

Many companies catering to senior healthcare are heavily reliant on government healthcare payers, whether Medicare or Medicaid. This situation creates reimbursement risk, as the government regularly uses its size to demand lower prices for services. Ninety-three percent of Welltower's portfolio NOI, however, comes from private pay sources, which shields it nicely from this common risk.

In Q1 2017, Welltower reported that its same-store NOI increased by 2.1% year over year. That highlights Welltower's ability to control costs and raise rent over time, enabling the company to improve its return on each asset in its portfolio.

Welltower owns 1,375 properties, with 70% of its in-place NOI coming from senior housing, 17% outpatient medical, and 13% post-acute or long-term care. Welltower operates primarily in the United States (which represents 81% of total revenue) but has a presence in both the U.K. and Canada.

While Welltower operates across the United States, its portfolio is concentrated in urban markets with high barriers to entry. That helps it maintain pricing power and maintain high occupancy, which is why its medical outpatient occupancy is 95%, compared with its peers' average of 91%.

Welltower is good at buying up buildings. It then leases them to partners such as Genesis Healthcare, Sunrise Senior Living (owned by Healthcare REIT), and Brookdale Senior Living. That means Welltower can stick to its core areas of expertise while enabling others to save on the substantial up-front cost of owning their buildings. Even better: No single operating partner represents more than 14% of Welltower's NOI from continuing operations. That helps Welltower spread out the risk tied to any operator's potential bankruptcy.

The Federal Reserve has held interest rates low since the Great Recession, which makes borrowing cheap. That's great for REITs, which generate returns by raising capital -- usually debt -- to buy properties, leasing out those properties, and pocketing the spread between those two numbers. With the Federal Reserve gradually raising rates, REITs will have more difficulty growing. This is particularly true for REITs with lots of variable-rate debt, as they'll see their interest rates increase, making that debt increasingly burdensome for those carrying it. However, less than 20% of Welltower's $10.5 billion in debt is variable-rate, which should help shield it from some of the immediate effects of the interest-rate increases.

REITs tend to grow by acquisition, and Welltower has plenty of room to do just that. Management estimates that REITs own roughly 10% of outpatient square footage, with health systems owning the vast majority of the rest. As hospitals seek to free up cash to upgrade their technology footprints or acquire other hospitals, selling their outpatient centers and then leasing them back could look increasingly attractive. But even if that scenario didn't pan out, the underlying point remains: Welltower has plenty of room to expand into a footprint several multiples of its current size if management can continue sourcing attractive deals.

Does that make Welltower the perfect stock to own?

All businesses have their weaknesses. For example, all REITs – Welltower included -- will suffer some ill effects as the Fed raises interest rates. But with the combination of attractive factors we've discussed here, I think many investors -- particularly risk-averse income investors looking for a strong dividend and a business model not dependent on a single drug -- would do well to give Welltower a second look. And then a third.