Video-game titan Activision Blizzard, Inc. (NASDAQ:ATVI) made headlines this week, when it announced the sale of the first seven teams for its Overwatch League to a broad cross-section of big league sports-team owners and veterans from the video-game industry. The New England Patriots' Robert Kraft and Jeff Wilpon of New York Mets fame are among the headliners for "the first major global professional esports league with city-based teams," according to the company's press release.

The first teams will take up residence in Boston, New York, Los Angeles, Miami-Orlando, San Francisco, Shanghai, and Seoul. The rights to the Shanghai team were acquired by NetEase, Inc., a Chinese video-game producer, which also distributes Activision Blizzard games in China. The goal is to eventually build the league to 28 teams. Regular-season matches for the inaugural season will occur on Thursday, Friday, and Saturday and take place at a Los Angeles-based esports arena, giving the local teams time to develop their venues.

The potential for these leagues lies not only in building excitement and engagement from the fan base, but also in developing major-league sports franchises supported by ticketing, broadcast rights, sponsorships, and advertising. 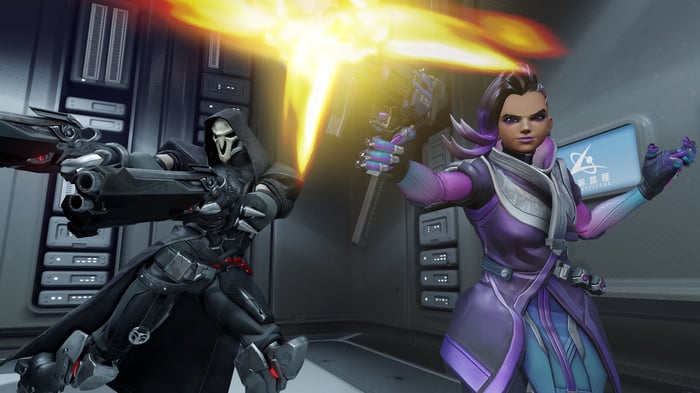 Activision sold the rights to the first seven teams for its Overwatch League. Image source: Activision.

It just keeps getting better

Before the announcement, Activision was already enjoying a better-than-anticipated year, having exceeded its own revenue guidance by 11% for the first quarter and more than doubling its expected earnings. Based on these results, Activision raised its guidance for the year, and that didn't include any benefit from the sale of teams for its Overwatch League.

The Wall Street Journal is reporting that the teams sold for $20 million each, to be paid over time, representing as much as $140 million in unforecast additional revenue for Activision. The remaining 21 teams could bring in $420 million, though the company has not confirmed the price of the teams, nor the timing of the payments.

This is the latest in a series of moves designed to position the video-game purveyor to capitalize on the potentially lucrative and growing trend of esports. In October 2015, Activision created a new division dedicated to competitive gaming and hired Steve Bornstein, who had previously performed CEO duties for both ESPN and the NFL Network. At the time of his hiring, Bornstein stated, "I believe esports will rival the biggest traditional sports leagues in terms of future opportunities."

A month earlier, the company had detailed the formation of an international league for its popular Call of Duty franchise, with total prizes of $3 million. The league would create regional competitions and live-streamed events throughout the year, while catering to both professional gamers and amateurs aspiring to be pros.

In early 2016, Activision acquired esports pioneer Major League Gaming (MLG), which provided the company with a proven broadcast platform, live-streaming capabilities, and a structure of physical and online tournaments. MLG co-founders Mike Sepso and Sundance DiGiovanni agreed to stay on and serve as vice presidents within Activision's esports division.

The Overwatch League is only beginning to tap the existing opportunity. Image source: Activision.

According to market-intelligence company Newzoo, Activision publishes four of the top 10 most watched esports titles in terms of Twitch viewership, including Hearthstone, Heroes of the Storm, Overwatch, and StarCraft II. This advantage provides the company with a broad pipeline for future expansion in the esports arena.

While still in its early stages, the opportunity for esports is tremendous. In an interview with Bloomberg, Patriots owner Robert Kraft pointed out that fewer from the Gen Z and millennial generations are watching professional sports than their parents, and many more have ties to video games. A number of the new Overwatch team owners have ties to professional sports, which lends legitimacy to Activision's approach. Kraft also pointed out that while NFL football is limited in scope to North America, the opportunity for esports is global. That illustrates why those with ties to professional sports are jumping on the esports bandwagon. Lock and load!