The snack food giant has been able to deliver decent returns to shareholders in recent years despite headwinds from shifting consumer tastes.

Since it began trading as a stand-alone company on Oct. 2, 2012, Mondelez stock is up more than 50%, as the snack food giant has been able to improve margins in the face of slow growth. Let's review the company's performance, as well as the opportunities and challenges Mondelez faces going forward.

In recent years, Mondelez has been undergoing a massive overhaul of its supply chain to improve its margins and at the same time remain positioned for long-term growth. Along the way, management has been very active with several transactions, shedding underperforming plants and nonessential businesses, which appear designed to narrow the scope of the company's focus around its most recognized brands.

The shedding of non-essential assets, coupled with currency headwinds, has caused Mondelez's annual revenue to fall to $25.9 billion in 2016 compared to $35 billion in 2012, but at the same time, the company has become more profitable. From 2012 through 2016, adjusted operating margin improved from 12.2% to 15.3%. This helped Mondelez grow adjusted earnings per share 39.5%, despite slow organic revenue growth over the same period.

The expectation of continued margin improvement and bottom line growth as a result of the company's restructuring program has evidently kept investors happy over the last five years, given the stock's fairly steady ascent. 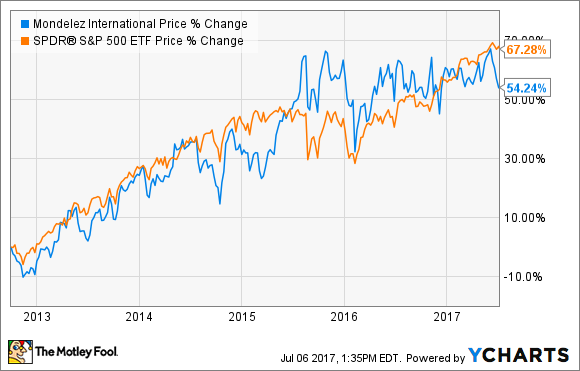 Mondelez is facing a monumental shift in eating habits

The heightened focus on cost-cutting and margin improvement is partly a result of criticism from activist investors who see Mondelez as underperforming other food giants, including Kraft Heinz. But it's also a result of people's changing eating habits. In developed markets, like North America and Europe, people are shifting to accessible, healthy snacks and less of the sugary kind from Mondelez.

In response to this shift, Mondelez has launched new good-for-you snacks like GOOD THiNS crackers, belVita biscuits, and Ritz Crisp & Thins, which have seen growth in the U.S. market recently. Management has also changed how it sources ingredients, with a particular focus on sustainable palm oil and a commitment to source 100% cage-free eggs over the next 10 years. Mondelez is also investing in new online marketing strategies with Facebook as a key partner, which appears to be paying off since a recent study found that teenagers identified Oreo as one of the top 10 coolest brands.

In the first quarter of 2017, adjusted operating margin improved further to 16.8%, and management has guided for a mid-16% margin for the full year. Margin improvement should further boost the bottom line, where management expects double-digit growth in adjusted earnings per share for 2017.

Since October 2012, the stock's 54% return has trailed the S&P 500's 67% return. Whether or not Mondelez International becomes a market beater will depend on the extent management can continue to cut costs and improve margins, and, at the same time, combat the challenges it faces in mature markets like North America.