According to Bloomberg, Facebook (NASDAQ:FB) plans to launch a $200 stand-alone virtual reality (VR) headset next year. The device will reportedly be built with the help of Chinese smartphone maker Xiaomi.

This upcoming VR headset, Bloomberg reports, will be powered by a Qualcomm (NASDAQ:QCOM) "Snapdragon mobile chip." 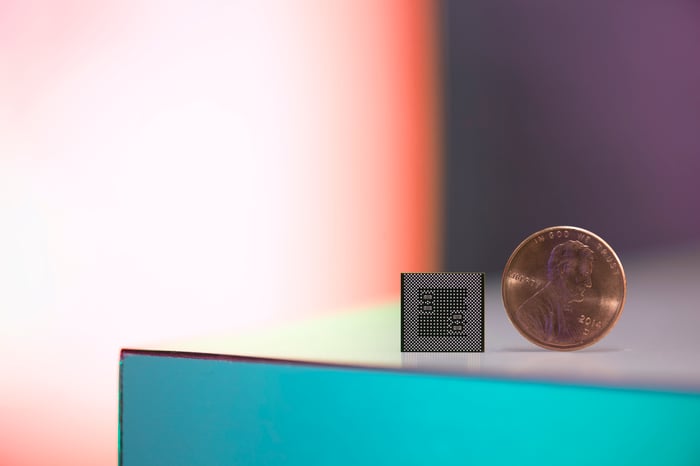 If I had to guess, I'd bet on this headset being powered by the current Snapdragon 835 mobile chip.

What could this mean for Qualcomm? Let's take a closer look.

If the future of VR is mobile, Qualcomm is well-positioned

Quite a lot of the relatively popular virtual reality headsets are, indeed, powered by mobile processors since those headsets require users to place their smartphones into the headset. The smartphone, in that case, provides the processing power as well as the display.

That said, if the long-term future for virtual reality (as well as augmented reality) headsets calls for "untethered" devices, such as the device that Facebook is reportedly working on, then Qualcomm could be well-positioned.

Why? Qualcomm is the leading merchant vendor of mobile applications processors, particularly for high-end devices, and since these virtual reality headsets seem to have very similar power/performance requirements as high-end smartphones, Qualcomm's technology should be right at home here.

Focus on the bigger picture, for now

I don't think Qualcomm selling chips to Facebook for stand-alone Oculus headsets is, alone, likely to be a game changer. However, if over the long-term stand-alone virtual reality headsets become very popular and many device makers decide to enter the market themselves, Qualcomm should be in a good position to provide chips (as well as other platform components, such as Wi-Fi/RF chips) to them.

A large market filled with many competitors would be the ideal situation for Qualcomm in this case.

Now, of course, Qualcomm won't run unopposed in this market. I wouldn't be surprised if, should the market for stand-alone VR headsets become large, some of the most powerful players decide to roll their own applications processors for this market.

Indeed, Qualcomm arguably faces significant competition in the high-end smartphone market today from companies that roll their own chips.

Moreover, in robust market, Qualcomm would likely face competition from traditional mobile chip competitors (e.g., MediaTek) as well as companies like graphics specialist NVIDIA and microprocessor giant Intel, both of which have expressed their respective desires to participate in the virtual reality industry.

Nevertheless, if stand-alone VR headsets don't significantly cannibalize high-end smartphones, any VR-related business should be incremental to Qualcomm. A focus on competitive pressures this early in the game (if it even ultimately proves to be a game worth playing) probably isn't a good use of investors' time.