Please ensure Javascript is enabled for purposes of website accessibility
Log In Help Join The Motley Fool
Free Article Join Over 1 Million Premium Members And Get More In-Depth Stock Guidance and Research
By Brian Stoffel, Rich Duprey, and Brian Feroldi - Jul 18, 2017 at 6:45AM

Here's probably the single most important thing for long-term investors to look for.

If you are a long-term, buy-and-hold investor, there's nothing more important to analyze than the sustainable business advantage -- or "moat" -- of the company you are investing in.

Of course, there's a time and place for looking at the balance sheet and analyzing cash flow. But without a reliable moat, no company can weather the effects of competition and commoditization. 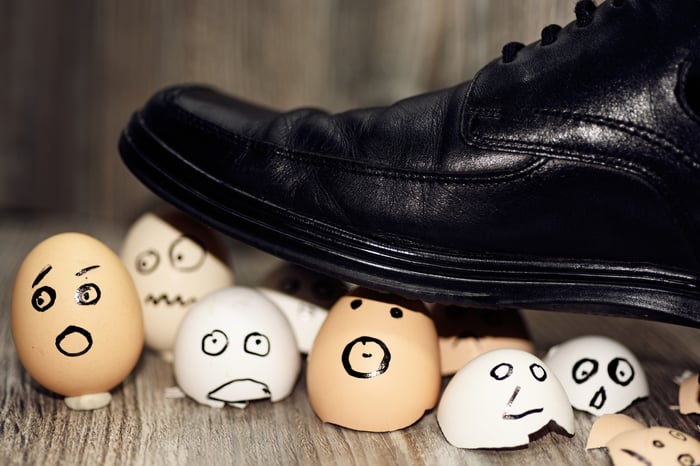 That's why we asked three of our Foolish investors to pick out the stocks with the most dominating of business advantages. Here's why Mastercard (MA 1.05%), Amazon (AMZN 2.07%), and Netflix (NFLX 2.72%) made the list.

Brian Feroldi (Mastercard): Keeping millions of merchants, consumers, and banks linked together electronically is no small task. With trillions of dollars flowing between these entities each year, it takes a real expert to be able to process billions of transactions with speed and accuracy. Despite the monumental challenges, payment-processing giant Mastercard has made it look easy for decades. That's a big reason why its brand has come to be accepted by merchants and financial institutions all over the world.

Mastercard's trusted brand name and worldwide ubiquity give it a huge leg up over potential rivals. After all, merchants want to accept payment brands that are carried by the most consumers, and vice versa. This network effect acts as a huge barrier to entry for any start-up that might want to create a payment-processing platform from scratch.

Given the company's strong competitive position, it is easy to understand why merchants allow Mastercard to earn a small transaction fee for every charge processed on its network. That's wonderful news for investors, as those fees add up quickly. In fact, last year the company grew its top line by more than 11%, to north of $10.7 billion. What's more, the company's operating leverage and buyback program allow it to post bottom-line growth of more than 14%.

Looking ahead, I think that it is likely that consumers will continue to favor plastic over cash or check, since they find it far more convenient, it's more secure, and they can earn rewards. That should help Mastercard to drive above-average profit growth for years to come.

The biggest advantage for Amazon is its board

Brian Stoffel (Amazon): This company has far and away one of the biggest moats in the world right now. Amazon's network of multimillion-dollar fulfillment centers guarantees two-day (or less) delivery; competitors would face huge upfront costs to match this scale. Amazon Prime's membership rolls are booming, which has led third-party merchants to flock to the site and use Fulfillment by Amazon -- drawing in even more customers and setting up a strong network effect.

But I actually think Amazon's most dominating business advantage goes back to when it was founded. From the beginning, founder and CEO Jeff Bezos made the company's mission clear: to be earth's most customer-centric company. To accomplish that goal, he would accept members onto the company's board only if they considered stock returns over rolling 10-year periods.

That might seem like a soft variable, but when you combine a board that's willing to ignore Wall Street's normal rules, a CEO with a 17% ownership stake, and a massive opportunity, the sky is the limit. Bezos is famous for quipping: "Your margin is my opportunity." And herein lies all of Amazon's advantage: It is willing to forgo profit for a long time to gain market share.

As an English bookseller said to Slate in 2014: "There is just no way to compete with them on price." There are few advantages more powerful than that.

Kick back and chill

Rich Duprey (Netflix): Whatever Netflix returns have been over the past decade or so -- and they've been phenomenal -- the investment thesis always seems to come down to whether its competitive advantages are sustainable.

Indeed they are. While the company still has its legacy DVD-by-mail service, it won't be long before that's a thing of the past. Streaming is obviously where it's at -- until the next big technological advance comes along (holograms?); it's likely Netflix will dominate that as well.

Hulu is a competitor, but it's not near the level of Netflix, even with substantial backing from media giants like Disney, Time Warner, and others. HBO and Showtime are still mostly tethered to cable, even though they have their own streaming services. And while Amazon Prime offers a similar service, it's nowhere near as simple or intuitive as Netflix.

The company's entrance into original content may seem like it is copying HBO and others, but the quality and popularity of its programming indicates there's more to it than just a me-too service. In fact, House of Cards, Orange is the New Black, and other shows make Netflix content a distinguishing feature that sets it above its competitors. Its ability to personalize the content gives it advantages unavailable to others.

That's translated into stunning subscriber growth. Whenever analysts contend Netflix's best days are behind it, it manages to outdo predictions. It's now just shy of 100 million subscribers worldwide, and most of the growth is coming from overseas, where there is still more room to expand. That global reach also helps set it apart from the competition.

Its dominating business advantages have kept Netflix ahead of its rivals, and brought it to a place where it now has more subscribers than all of cable television.