S&P 500 companies with yields above 5% are rare. They can also be risky. So before you add any to your portfolio, there are a few tests worth performing.

Interest rates have been hovering near historic lows for several years now. That's a big problem for retirees, many of whom depend on income from their investments to help finance their lifestyles, and who may prefer interest-paying assets like bonds due to their low risk.

But poor returns from those "safe" assets have incentivized some income investors to put money in the highest-yielding stocks they can find in order to generate decent level of regular returns. This might sound like an attractive plan, but it can actually be a risky strategy. Too many stocks wind up with impressive-looking yields because their shares have been punished, often justifiably, by the market. The business itself may not be able to sustain such a payout much longer, and falling stocks may have further to fall. 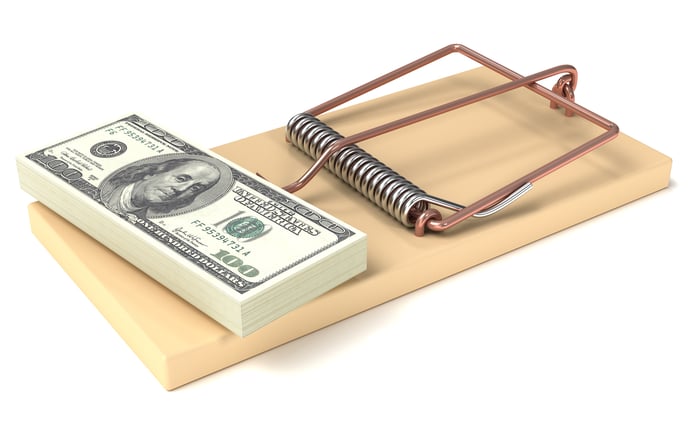 Recognizing all this, let's put the 10 highest-yielding stocks from the S&P 500 to the test to figure out if any of them could be worth buying today.

Test No. 1: The payout ratio

Smart income investors know that the first metric that they should look at when considering any high-yield dividend stock is its payout ratio. This figure is calculated by dividing the company's last 12 months of net income by its total dividend payout. The end result will tell investors what fraction of a company's profits are being used to cover the dividend. While this statistic is far from a perfect gauge -- one-time charges can sometimes heavily bias earnings downward -- it does provide investors with a quick way to measure a dividend's sustainability.

Here's how these 10 companies stack up:

Table source: Yahoo! Finance. NM = not meaningful; these companies reported losses over the past 12 months.

A quick glance at the table above shows just how useful the payout ratio can be at helping you cull your list of potential investments. Frontier Communication hasn't even reported a profit over the last twelve months, which is why it doesn't have a payout ratio. After factoring in that it recently slashed its dividend by 62%, I'm content to eliminate the company from contention.

Investors should be equally wary of investing in CenturyLink, Mattel, or Seagate Technology. All three of these companies are paying out more in dividends than they are earning in net income, which isn't a sustainable practice over the long term. That makes me believe they should also be excluded from further consideration.

If a company's payout ratio looks sustainable, then I next like to get a sense of its growth potential. In my judgement, a dividend stock is only attractive if it can increase its payout over time. No company can do that long term without a growing profit stream.

One quick way to gauge a company's growth potential is to look at both its historic rate of growth and its forecast growth rate over the next five years. While this method isn't foolproof, it does give us a sense of a where a company has been and where it could be going.

Here's how our remaining six companies stack up in this area:

As you can see, big box retailers Macy's and Kohl's have seen their profits head in the wrong direction over the last five years. While there are a number of factors in play here -- declining mall traffic, discounting by competing bankrupt retailers, the rise of e-commerce -- the overall result has been shrinking net income. That's troubling, but it is interesting to see that Wall Street believes that both retailers will post healthy profit gains over the next five years -- Macy's in particular. That bullishness likely stems in part from the company's willingness to close underperforming stores and monetize its real estate assets. If that forecast growth rate can be believed, Macy's could certainly be worth considering.

AT&T and Verizon Communications have both produced consistent growth over time, which makes sense given their dominance of the U.S. wireless industry. It is noteworthy that Verizon's profits have grown at a double-digit rate while Ma Bell's gains have been more muted. However, analysts expect that AT&T will be the faster grower from here, a view that likely stems from its recent purchase of DirecTV and its pending merger with Time Warner. If that merger gets the green light, then the company should have ample opportunity to grow revenue and cut costs, both of which could lead to an expanding bottom line.

L. Brands, the retail company behind Victoria's Secret and Bath & Body Works, has managed to keep its profits moving in the right direction in spite of facing the same issues that have plagued its big-box competition. Beyond its brand strength, one explanation for its success could be the company's big push into e-commerce. Last year, the company sold nearly $2 billion worth of products through its direct channels, representing about 16% of total sales. The company's growth plans call for a continued emphasis on online sales, and an intense push to grow its store count in China. If those moves pay off, then shareholders could certainly benefit.

Meanwhile, analysts are predicting that Ford's profit trend will shift into reverse over the coming years. That view likely stems from worries that North American auto sales have peaked, plus concerns about it recent sudden change in leadership, and the long-term threats posed by electric and autonomous vehicles. New CEO Jim Hackett will have his work cut out for him in terms of changing Wall Street's outlook on Ford's.

These two high-yield stocks could be worth owning

While these stocks are far from risk-free, and each has its own unique set of pluses and minuses, I must admit that Macy's and L. Brands are the two that interest me most from this list. Both companies can afford to make their dividend payments today, and could be in position to grow after the current wave of retail bankruptcies and store closures finally subsides. That's an intriguing combination that makes them worthy of further investigation.