Some projections are easier than others.

Research firm EvaluatePharma recently published its report of where the pharmaceutical industry could be in 2022. One of the firm's projections was which big pharma companies would have the best return on investment (ROI) in the coming years.

One important thing to note about EvaluatePharma's projections, however, is that they didn't attempt to estimate an investor's ROI from buying the stocks of these companies. Instead, the firm analyzed the top pharma companies' investments in research and development (R&D) as well as mergers and acquisitions (M&A) compared to its calculations of the net present value each company's products. In other words, EvaluatePharma's effort attempted to determine each pharma company's internal ROI.

This is still applicable for investors, though. Stocks of companies that invest their resources effectively typically are good investment choices themselves. So which big pharma companies have the best projected ROI? Here's why Novo Nordisk (NYSE:NVO), Celgene (NASDAQ:CELG), and Bayer (OTC:BAYR.Y) stood at the top of the list. 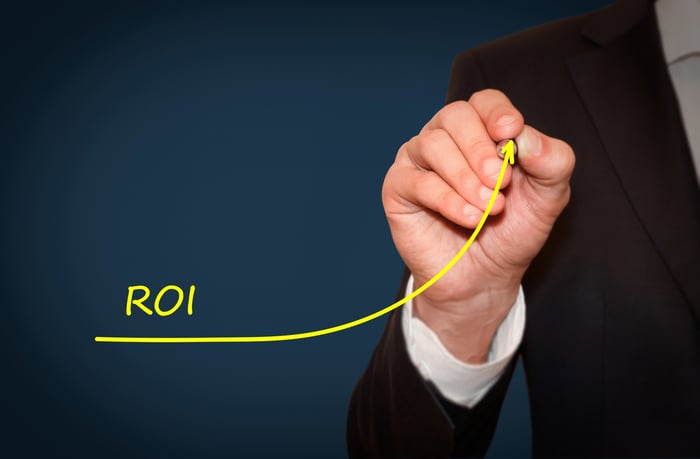 Novo Nordisk spent less on R&D last year than all but two of the top 20 big pharma companies. It also didn't make any M&A deals between 2006 and 2016 -- the only drugmaker evaluated to not do so. As a result, the denominator in the ROI calculation was lower than any other big pharma. Even though Novo Nordisk's products and pipeline aren't as valuable as some of the others, its low investment total gave it an ROI score of 4.8 -- by far the highest of all the big pharma companies included in the analysis.

The diabetes market is where Novo Nordisk shines, with worldwide sales of its diabetes drugs totaling $12.9 billion. Novo Nordisk appears to be in great shape to continue its dominance in the market for years to come. Although sales for the company's insulin analog NovoRapid is likely to slip somewhat, growth for Tresiba should more than offset those declines.

Novo Nordisk's pipeline candidate, semaglutide, could also become one of the top-selling diabetes drugs in the world over the new few years. The company currently awaits regulatory approval of the drug and is evaluating an oral form of semaglutide in late-stage clinical studies.

Celgene reported R&D spending of $4.47 billion last year, which puts it in the middle of the pack of the top 20 drugmakers. Unlike Novo Nordisk, Celgene has made some acquisitions over the last 10 years, notably including its 2015 buyout of Receptos. These investments should pay off: EvaluatePharma gave Celgene an ROI score of 2.8, giving the biotech the No. 2 spot among all big pharma companies.

Potential growth is one area where Celgene ranks above all others. The company is expected to grow sales by a compounded annual growth rate of more than 15% -- faster than any other big drugmaker. Celgene's current products, particularly Revlimid, Pomalyst, and Otezla, should contribute significantly to its growth.

The biotech's pipeline is also promising. Luspatercept is a late-stage candidate that could bolster Celgene's presence in the blood cancer market. Ozanimod, which the biotech gained with the Receptos acquisition, could be a megablockbuster for treating three indications -- multiple sclerosis, Crohn's disease, and ulcerative colitis.

Bayer stands out as one of the top pharma companies with the most even balance between R&D and M&A spending between 2006 and 2016. This balance appears to be working for the German company. It is projected to have an ROI score of 2.1.

Two of the top-selling drugs of today and the future are co-marketed by Bayer. Blood thinner Xarelto and eye-disease drug Eylea are expected to rank in the top 10 biggest-selling products in the world in 2022.

Bayer also has a robust pipeline, with 17 late-stage programs. Experimental prostate-cancer drug darolutamide is one of the company's leading candidates.

While Novo Nordisk, Celgene, and Bayer all should see solid ROIs on their R&D and M&A spending, one of them is the clear winner in my view as the best stock. The hands-down winner is Celgene.

Celgene's earnings are projected to grow by nearly 21% annually over the next five years. That's more than twice the estimated growth for Novo Nordisk and nearly three times the projected growth for Bayer. Despite this tremendous earnings growth potential, Celgene stock currently trades at only 15 times expected earnings.

If you're looking for dividends, Novo Nordisk is the much better pick. However, for pure investing ROI, I like Celgene.