Please ensure Javascript is enabled for purposes of website accessibility
Log In Help Join The Motley Fool
Free Article Join Over 1 Million Premium Members And Get More In-Depth Stock Guidance and Research
By Tyler Crowe - Jul 19, 2017 at 9:49AM

The market for Archrock's contract compression services for the oil & gas industry is about to kick into high gear.

Archrock (AROC -0.60%) and Archrock Partners (NASDAQ: APLP) didn't exactly put up spectacular numbers this past quarter. Then again, the nature of the natural gas compression services business isn't supposed to be killing it at this point in the industry cycle. The real question will be what happens over the next couple quarters as production gets back to pre-crash levels. More important, though, is what happens over the next couple years as natural gas demand in the U.S. grows immensely.

During the company's most recent conference call, management addressed these issues as well as how the company plans to address its most pressing concern: Too much debt at Archrock Partners. 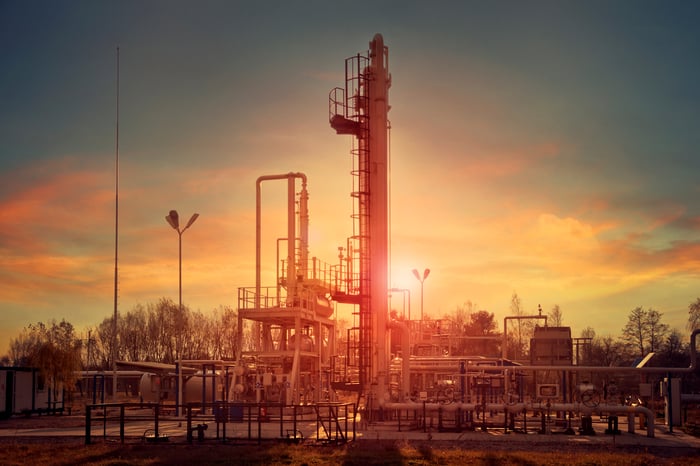 The industry cycle is turning

The oil and gas sector is a beguiling beast. Since there are so many different moving parts in the business, one sub-sector can be on the road to recovery while another can still be sliding to the bottom of the cycle. Knowing where each business within the broader spectrum of the industry lies is critical if you want to invest in it. For Archrock, its business will tend to lag behind upticks in the U.S. onshore drilling activity and production. According to CEO Brad Childers, even this late stage company is starting to see a turnaround.

[N]ew orders during the quarter were robust. Our sales team capitalized on the higher level of customer activity in the quarter and delivered a strong book of orders that should enable us to drive top line growth in the second half of 2017 as we've previously discussed. From a play perspective, new orders were especially strong for the Permian, Eagle Ford, Haynesville and Niobrara. The actions we took in 2016 have positioned Archrock to take advantage of market opportunities that we believe are now emerging.

Childers even mentioned in his prepared remarks that this was the highest level of new orders since Q4 2014. New orders isn't typically a metric that management uses to measure success within the company, and it is a measure that seems to be out of line with some of the other metrics that declined such as operating horsepower and EBITDA. Childers did explain that new orders are an early indicator that precedes deploying compression horsepower to the field. If this is to believed, then we should see an uptick in horsepower in use this coming quarter.

Costs getting out of control?

One note of concern this past quarter was that expenses were a little higher than what analysts expected. According to Childers, though, these costs were mostly one-off issues that will go away as its idle feet gets put to work.

On the cost front, much of the higher costs we incurred were due to an increase in make-ready and mobilization expenses as well as an increase in labor expense, each necessary as we prepare to meet higher demand. As a later cycle participant, we believe 2017 will be a transition year as the current cycle turns from contraction to expansion. During this transition period, we will work to balance cyclical lows in pricing and utilization with a need to invest to meet the expected growth ahead.

This statement is par for the course for most oil services companies heavily tied to onshore drilling right now. An excellent example of this is frack sand producers. Demand for sand has been so high lately that producers have been running incredibly high costs as of late as they bring idle facilities back on line. If Archrock's costs remain high several quarters from now, then management won't be able to lean on this as a reason.

The master limited partnership corporate structure only works well if a company has a steady revenue stream. On the surface, contract compression would be a decent business for this type of corporate structure as compression is more closely tied to production than drilling activity and production tends to be more steady. The sharp downturn in oil and gas prices in 2014 showed that isn't always the case, though.

Since this downturn showed that Archrock Partner's business wasn't quite as steady as management originally thought, it required some swift action from management. It did just that by cutting Archrock's payout at the end of 2015 to help preserve solvency. So it's now customary for Childers to give an update on Archrock Partners distribution and leverage ratios.

Archrock Partners' distributable cash flow coverage was strong at 1.8x for the first quarter and has provided APLP with the financial flexibility to invest in its fleet for long-term growth. Leverage of the partnership increased slightly to 4.9x debt-to-EBITDA from 4.7x debt-to-EBITDA in the fourth quarter of 2016. APLP's leverage continues to be a primary focus for Archrock and we are committed to being -- to bringing it down over time.

The reason for the uptick in debt to EBITDA was because of a modest decline in EBITDA as well as a recent asset dropdown from Archrock, which did result in taking on some debt. With such a healthy distribution coverage ratio, though, there is ample excess cash to either grow EBITDA or pay down debt, both of which can lead to better credit metrics.

Compression horsepower for this industry is focused almost exclusively on the natural gas side of things. About 79% of Archrock's fleet is on the natural gas side of the business. So as you might imagine, the real growth engine for this company long term is going to be the growth in natural gas production in North America. Luckily for Archrock, it looks like there is plenty of growth in this particular market. Here's Childers on the outlook for natural gas over the next several years that should give investors lots of hope for the future.

We believe our business is in an excellent position to participate in and capitalize on the secular growth drivers that are expected to increase natural gas production by between 15% and 20% through 2020 and likely more beyond that. In the coming years, we believe the significantly improved quantities, accessibility and price stability of natural gas in the U.S. will continue to drive higher levels of demand for LNG export, pipeline exports to Mexico, power generation and use as a petrochemical feedstock. We believe that growth in natural gas production to meet this demand growth will lead to an increased demand for compression services that will absorb excess equipment in the market as well as require a significant amount of new compression capacity.

As we discussed in our fourth quarter earnings call, for these reasons, we expect to increase our investment in our fleet in 2017 so that we will have equipment available in configurations desired by our customers to meet this expected demand. Continued investment in our fleet, coupled with the structural and operational improvements we made to our company, has enhanced our ability to leverage our strong operating presence, solid customer relationships and our excellent service teams and capability to grow our business as the cycle now turns toward expansion.

This market outlook is a good reason to not pay out all excess cash to shareholders at the partnership level. If industry growth is anywhere near what Childers is saying, then there is a tremendous opportunity for this company. The real challenge for master limited partnerships is balancing fast growth with high payouts.  With Archrock Partners' stock already carrying a 7.6% distribution yield, there isn't any rush to grow that payout.

Getting back to distribution growth

Ever since management decided to cut Archrock Partners payout, it has kept that payout flat to address the issue of leverage and to facilitate growth. As you might expect, one analyst wanted to get the details as to when management thinks its debt load is in a manageable range to raise the payout and what kind of coverage ratio it intends to have once it meets those debt levels. Childers gave his best non-answer possible.

We haven't set what the distribution policy is going to look like when we get back to the point where we're comfortable raising it up. So it's too early to comment on where we're going to set it and how it will move, but we do know that we're carrying pretty good leverage right now. That is our first concern. We want to see that move in the direction we've indicated. And the path to doing that includes the growth in our business, which we're seeing very strong indications of and positive indications of. And as for the coverage, we're also carrying robust coverage to address that leverage. So we believe the good news is, from a capital perspective, we have adequate -- a great capital position right now to participate in growth to drive that EBITDA going forward, mobilization and growth in horsepower, which is going to allow us to take those steps in the future. So we feel like we're in a really good position, but it's premature to talk about the distribution policy at this stage.

It's probably better that management doesn't pledge to any significant increase in payout before getting a better feel for the future of the business. In doing so, it will give them some flexibility once its leverage is in a better place to reinvest in the business. Granted, a 1.8x coverage ratio is probably a little too high over the long term, but it would be a mistake to think it can accomplish all its growth goals with a coverage ratio in the 1.0x-1.1x range.

Danger Lurks for These 3 High-Dividend Stocks