Traditional payment systems are doing just fine, but disruption is in the air. A new paradigm is beginning to gain momentum, as evidenced by the two companies taking the old guard by storm -- Square, Inc. (NYSE:SQ) and PayPal Holdings, Inc. (NASDAQ:PYPL).

Digital payments are only now coming into their own, and both companies provide a way to invest in the nascent field. Reviewing a variety of financial metrics and growth prospects may provide insight into which company is a better place for new money right now.

These companies provide a couple of ways to tap the growth in digital payments, but which one? Image source: Getty Images.

As you can see from the chart below, PayPal has piles of cash and no debt. On top of that, it is throwing off billions in free cash flow, and that will likely increase. Square has enough cash on hand to extinguish its debt if it wanted to, but it is prudent to keep some cash for unforeseen eventualities. Square's negative net income and minimal cash flow might set off alarm bells if it weren't for the fact that the company is still "squarely" in growth mode and is investing heavily in expansion, most recently into the U.K. All factors considered, though, PayPal gets the nod.

The company has been entering into partnerships with all of the major credit card processors as well as many others in the payments space. A recent example was an expanded agreement with Google, a division of Alphabet, where PayPal will be available in the Android Pay wallet for U.S. customers.

PayPal's active accounts clocked in at 203 million, up by 11% year over year, and each account averages 32 transactions per year, creating a powerful network effect. The company is also expanding its Venmo payment platform, a peer-to-peer system, which grew to $6.8 billion in TPV, an increase of 114% year over year. PayPal merchants will soon be able to accept payments via Venmo, likely accelerating the millennial favorite. 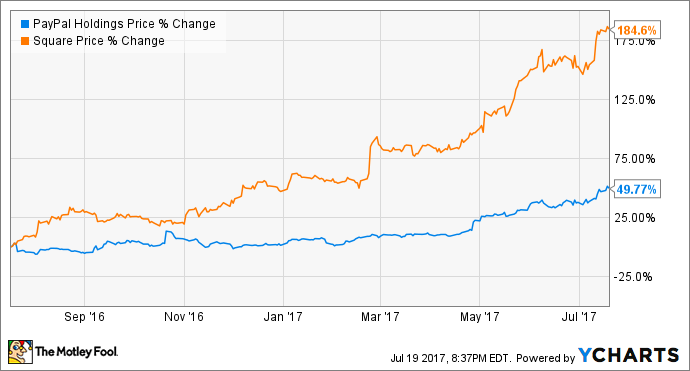 Square: During the same quarter, Square grew revenue to $461 million, up 22% year over year, while its net loss decreased to ($15 million), a vast improvement from the loss of ($97 million) in the prior-year quarter. Square's gross payment volume (GPV) (which PayPal refers to as total payment volume) hit $13.6 billion, an increase of 33% year over year.

In addition to its signature square card reader for payments, Square has introduced a variety of services, which include small-business loans, instant deposit, and data analytics that provide an ecosystem of tremendous value. The company also provides such basics services as accounting, payroll, and inventory, which encourages businesses to stay once they have signed up. Add to this its international expansion, and the company has a long runway for growth ahead of it.

Both companies are growing quickly and challenging the incumbents and based on the recent results, both are winning, with neither having a decisive edge.

Over the last year, PayPal's stock has gained 50%, more than tripling the market's 14% gain. During the same period, Square has crushed both, with an increase of 185%.

Many of the normal valuation metrics will be useless in valuing Square, as it is currently not profitable. Using price to sales as a proxy, Square has a multiple of 156, compared to PayPal's less expensive 32 times trailing sales. Looking forward, Square sports a still high multiple of 132, compared to PayPal's 27 times forward sales. This extremely high valuation shows that investors are expecting Square's blockbuster growth to continue. 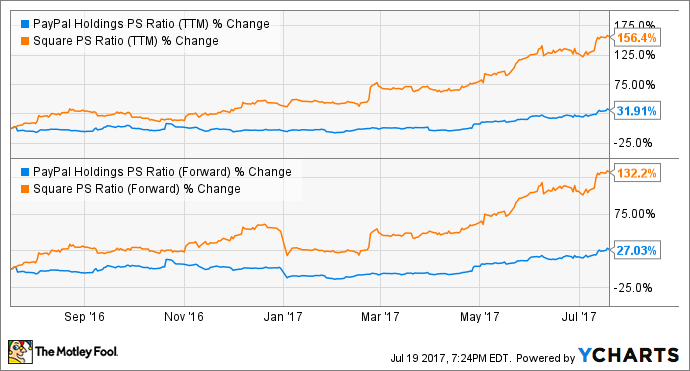 With the better valuation going to PayPal, there is a clear winner.

PayPal came out ahead in financial fortitude and valuation. While Square's high multiples will turn away many investors, there are those willing to accept a higher risk profile for the opportunity for higher returns.

It is interesting to note that some analysts have called for PayPal to buy its smaller rival in a bid to cement its place in the burgeoning digital payments arena. While the space is still in its infancy, both companies could provide impressive returns over the long haul.