When it comes to the high-flying healthcare sector, there aren't many bargains to be had. President Trump's recent change of heart regarding the possibility of hard caps on high-priced prescription drugs, after all, sparked a widespread rally that's caused valuations to balloon over the past month or so.

Valeant Pharmaceuticals International (NYSE:BHC) and Gilead Sciences (NASDAQ:GILD), however, are two high-profile names that are still arguably "cheap" -- at least based on their rock-bottom price-to-sales ratios of 0.63 and 3.22, respectively. Armed with this insight, let's consider which of these two bargain-bin healthcare stocks is the better buy right now. 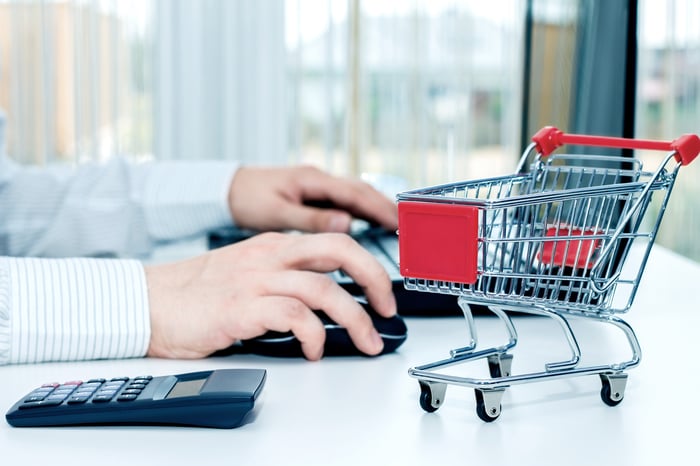 Valeant: Digging its way out of a deep hole

Valeant's super-aggressive growth-by-acquisition strategy proved to be its undoing when the company's pricing practices drew the ire of regulators and politicians alike. The net result is a company with a staggering amount of leverage on its balance sheet -- illustrated by its jaw-dropping debt-to-equity ratio of 714%, a falling EBITDA (earnings before interest, taxes, depreciation, and amortization), and a share price that's now well off its five-year highs.

On the bright side, Valeant's fairly new CEO Joseph Papa has begun the herculean task of righting the ship, so to speak. Since taking the reigns, Papa has focused heavily on reducing the company's monstrous debt load and improving its financial flexibility. The company has now divested multiple non-core assets, such as its Dendreon business and, most recently, its skin-care subsidiary Obagi Medical Products, to achieve Papa's stated goal of reducing debt by $5 billion by early 2019.

Unfortunately, Valeant's debt problem is so bad that even $5 billion won't be enough to markedly improve the company's balance sheet. More has to be done to move the needle on this critical risk factor, and that's where Valeant's enticing value proposition seems to come off the rails.

Long story short, Valeant simply doesn't have enough organic growth coming down the pike to avoid the divestiture of a core asset that would radically alter its value proposition to investors. Its newly approved psoriasis drug, Siliq, for instance, is facing a bevy of competitive threats that could very well keep it from making much headway in the high-value anti-inflammatory market. That's a serious problem, as Siliq was expected to be a key growth product for the company heading into next year and beyond.

In the final analysis, Valeant doesn't appear to have much choice but to cut bait with a significant asset within the next two years, and that could include its all-important Bausch & Lomb business segment.

Gilead has been in biotech purgatory for awhile now due to the company's reluctance to address its faltering hepatitis C franchise with a bolt-on acquisition. The company's quarterly revenues, after all, have been in steep decline for a solid year-and-a-half as a result of higher competition and pushback from payers. Worse still, this negative trend is only expected to accelerate as more potent competitors enter the market -- such as AbbVie's glecaprevir/pibrentasvir combo therapy that's presently under review with the Food and Drug Administration (FDA).

Gilead, for its part, has actively championed its considerable pipeline efforts in anti-inflammatory conditions, non-hep C liver diseases, cancer, and of course, HIV, as reasons to be optimistic about the company's growth prospects moving forward. At the end of the day, though, these ongoing clinical programs aren't expected to bear fruit anytime soon, with one notable exception: Gilead's next-gen HIV combo medicine bictegravir/F/TAF, which is forecast to become a top-selling drug by 2022.

Point blank: The acquisition of a revenue-generating peer is essential to Gilead's near-term growth prospects. The company shouldn't have any problem going this route, given that it exited the most recent quarter with $34 billion in cash and cash equivalents. Even so, Gilead hasn't shown any outward signs that it's gearing up for a major acquisition soon. Complicating matters further, the ongoing rally among pharma stocks may make a buyout even less attractive to the biotech's rather conservative management team.

Gilead wins this matchup by default. Valeant, after all, is a mess that's going to require CEO Joseph Papa perhaps a decade, or even longer, to clean up. Gilead, by contrast, still has tremendous free cash flows, a growing dividend program, and the financial flexibility to take out nearly any size target it desires if a compelling opportunity presents itself.