Deciding whether to buy or sell stock in Caterpillar Inc. (NYSE:CAT) raises one of the great investing conundrums: what to do with a stock that has strong earnings momentum, but whose current valuation is starting to look high on a historical basis. Let's take a look at the investment case for buying the stock and why the valuation should be giving investors cause for concern.

There's no doubt the company has a lot of positive momentum behind it, as it continues to beat estimates -- although this is partly due to internal guidance and commentary proving overly cautious. A case in point is management's guidance on revenue and earnings for 2017. For example, back in December, management argued that the analyst consensus for full-year 2017 revenue of $38 billion was reasonable but that the profit-per-share estimate of $3.25 was "too optimistic considering expected headwinds." 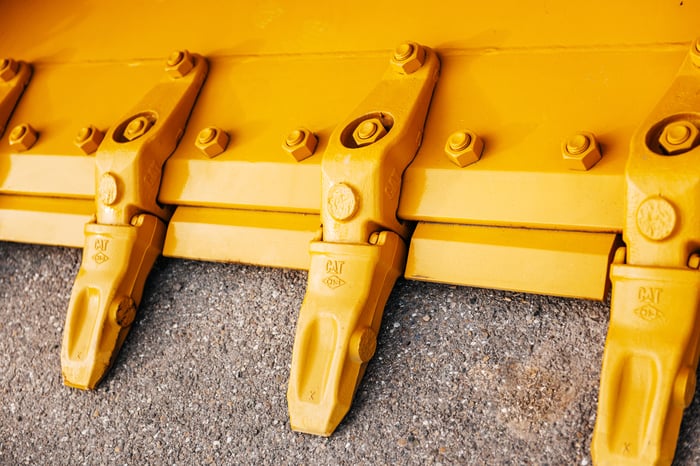 Fast-forward to the fourth-quarter 2016 earnings call in January, and management's profit-per-share forecast was a disappointing $2.90, while the revenue guidance range of $36 billion to $39 billion implied a midpoint of just $37.5 billion.

These estimates proved overly pessimistic. In reality, a relatively improving energy, construction, and resources spending environment led to a set of first-quarter earnings which CFO Brad Halverson described as exceeding expectations. Consequently, management's new guidance calls for revenue of $38 billion to $41 billion, an increase of $2 billion from the previous outlook. Moreover, profit per share (excluding restructuring costs) is now expected to be $3.75 compared to the previous outlook for $2.90.

Of course, the larger part of the reason that revenue and earnings estimates are being raised is that Caterpillar's end markets are improving in 2017. The following charts suggest oil and gas and resources capital spending remain in growth mode, while construction activity in the U.S. remains strong. (U.S. rig count is often seen as a proxy for oil and gas capital spending --oil-and-gas-focused industrials like Dover Corp. have been raising full-year guidance as a result of a higher-than-expected rig count.)

Meanwhile, U.S. coal rail traffic -- which closely correlates to production and is a useful proxy for mining capital spending -- is growing on a year-over-year basis. In addition, China's GDP growth of 6.9% in the each of the first two quarters is ahead of expectations -- important, as the country is a key part of Caterpillar's growth plans. 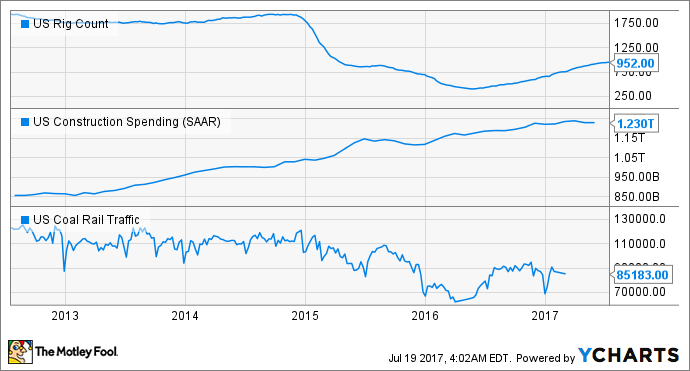 For example, let's look at current analyst consensus estimates and what Caterpillar's P/E ratio would look like if they are hit -- P/E ratios are based on the stock price of $107 at the time of writing.

Now let's compare the forward estimates for P/E and what Caterpillar has traded on in the past. The table above shows that the earnings estimate for 2018 is similar to the EPS reached in 2015.

However, the chart below shows the two P/E spikes in the last 10 years. The first (around 2010) is the market pricing in an aggressive pickup in post-recession earnings. The current spike is the market pricing in the big increase in EPS implied in the analyst EPS estimates above. However, the current valuation puts Caterpillar on a 2018 P/E ratio of 20 times earnings -- a valuation the stock has rarely been on. 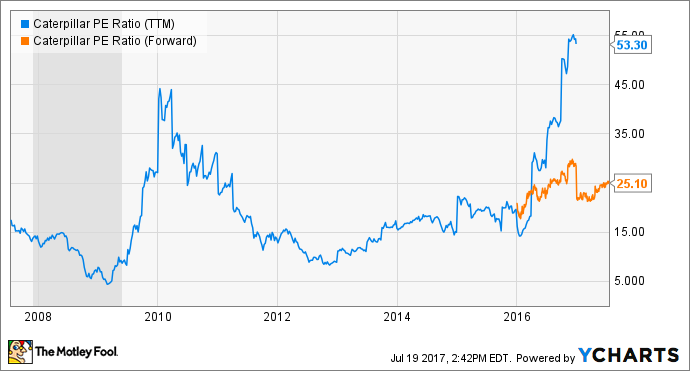 How to think about the stock

All told, the current valuation is assuming Caterpillar's earnings will remain in growth mode beyond 2018, or else the market thinks analyst forward estimates are too low. The latter may well prove to be true, but if there is any downturn in oil and gas or resources spending, or even a slowdown in China, then Caterpillar's valuation could leave the stock exposed.

Why Caterpillar Inc. Shareholders Have Something to Worry About @themotleyfool #stocks $CAT Next Article
Current