It's been many a year since one could last describe e-deals website Groupon (NASDAQ:GRPN) as a hot stock. Today, Bank of America Merrill Lynch thinks you should drop it.

That's the upshot of a new rating that came out this morning from B of A's Merrill Lynch brokerage unit. Reinstating coverage of Groupon stock on Friday, Merrill assigned Groupon an underperform rating and a $3.50 price target. With Groupon shares recently trading for just under $4, this implies a nearly 8% loss on the stock lies ahead.

Now here are three more things you should know about Groupon. 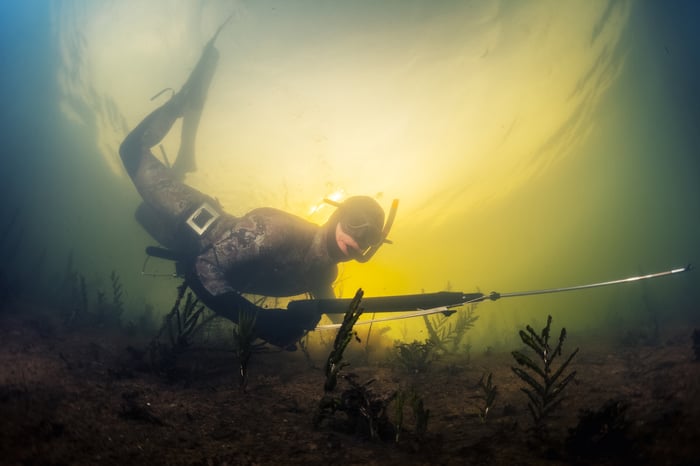 Is it safe yet to go bottom-fishing for Groupon stock? Image source: Getty Images.

1. We now return to our previously scheduled programming

It's been a long time since Merrill Lynch even bothered to have an opinion about Groupon -- and even when it did, that opinion was negative. According to StreetInsider.com's (requires subscription) detailed history of analyst ratings on the stock, Merrill Lynch last published a report on Groupon in November of 2015. Back then, Merrill rated Groupon underperform as well, but with a $2.75 price target.

In the nearly two years since, Groupon stock has instead gone up in price, recently hitting $3.77 per share -- 37% above Merrill's original target price. So investors might be forgiven for asking today: Why should we listen to what Merrill Lynch is saying about Groupon now when it was so wrong about the stock two years ago?

Merrill Lynch says that Groupon is taking "a cautious approach at rolling out higher engagement products." On the one hand, that's understandable. TheFly.com reports Merrill complaining about Groupon's increased spending on marketing, and about how the company is still having trouble with customer "retention" -- getting folks to stick around after snagging their initial deal online.

Revenue trends are "inconsistent" and the company has "limited operating leverage." In other words, Merrill thinks every increase in revenue at Groupon will come at the cost of an increase in marketing. This would make it hard for Groupon to expand profit margin, because for Groupon to grow sales, it would need to incur higher costs and thus hobble its profits. On the other hand, if Groupon tries to salvage profits by cutting marketing spending, its sales can't grow.

3. Do the numbers bear this out?

At first glance, Merrill Lynch seems to have a point. Last year, for example, S&P Global Market Intelligence figures show that Groupon managed to grow its revenue almost 1%. To do that, though, the company had to grow its selling, general, and administration (SG&A) costs nearly 2%.

While Merrill Lynch seems to be right about Groupon's revenue trends being inconsistent, I'm not sure these numbers bear out the banker's thesis that Groupon cannot grow its sales without also spending a lot more on marketing. If Merrill turns out to be wrong about that, though, doesn't that also mean the analyst is wrong to tell investors to sell Groupon stock?

Not necessarily, no. "Inconsistent" revenue trends make it hard to say for certain whether Groupon can or cannot grow its sales without spending an inordinate amount on marketing. What I can say, though, is that Groupon stock looks overpriced for how the company is performing right now.

Consider: After vastly outperforming Merrill Lynch's expectations last time around, Groupon stock now sells for nearly $2.1 billion in market capitalization. Yet the company has no price-to-earnings ratio, because it is earning no GAAP profits. Nor is Groupon likely to achieve a positive P/E any time this year, because according to most analysts who follow the stock, Groupon will lose money in 2017.

According to S&P Global data, most analysts expect Groupon not to turn profitable again before 2018. In that year, it's expected to earn $0.02 per share in profit, giving the stock a forward P/E ratio of about 185. Fact is, the stock's P/E ratio doesn't look likely to achieve anything like a reasonable valuation before 2021, in which year analysts hope Groupon can earn $0.19 -- giving it a very forward P/E ratio of 19.5 times earnings...four years out.

Whether or not you believe what Merrill Lynch says about Groupon's marketing spending and its ability to grow revenue, Groupon's not earning enough today -- nor likely to earn enough for years to come -- to justify buying this stock.

Will Groupon Stock Ever Be Great? Merrill Lynch Thinks Not @themotleyfool #stocks $GRPN Next Article
Current