Qualcomm's (NASDAQ:QCOM) most recent financial performance was something of a mixed bag. On the one hand, the company made good progress in growing both the revenue and the profitability of its wireless chip business.

Unfortunately, the company's wireless technology licensing business -- the business that has typically delivered most of Qualcomm's operating profit -- cratered as a result of the current legal spat with Apple (NASDAQ:AAPL). 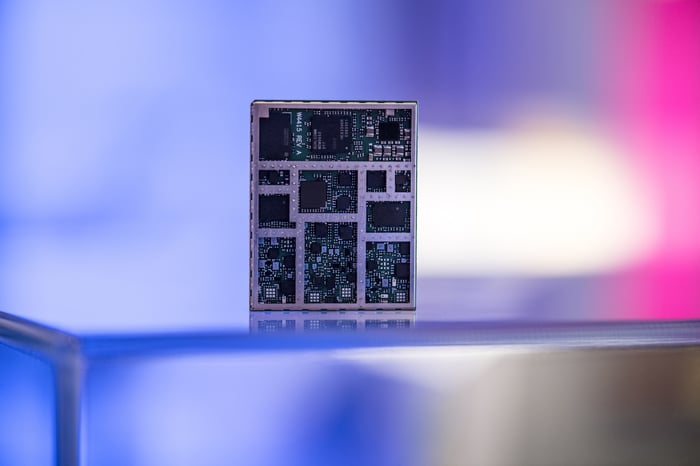 Uncertainty with respect to the long-term outcome of the legal battle between Qualcomm and Apple appears to be weighing significantly on Qualcomm stock. Qualcomm management tried to assuage investor fears on its most recent earnings call. Here are three things management wanted to let investors know.

"We reported fiscal third quarter non-GAAP earnings per share and revenues consistent with our revised guidance and above the guidance range midpoint, driven by better-than-expected product mix in our semiconductor business," Qualcomm CEO Steve Mollenkopf said during the earnings call.

"Better than expected product mix," by the way, just means that the company sold, on average, more expensive/higher-end components than it thought it would going into the quarter.

Mollenkopf also highlighted that its chip business "continues to see strength in the highly competitive China region and is executing well across all price tiers."

Qualcomm's main merchant chip competitor in the China market is MediaTek, and it also faces competition from lesser vendors, such as Spreadtrum and Leadcore Technology.

"Our gigabit LTE and 5G leadership combined with our Snapdragon 835 and new Snapdragon 600 product are well ahead of our competitive solutions," Mollenkopf added.

On the most recent earnings call, Mollenkopf explained that Qualcomm expects the NXP acquisition to "provide [Qualcomm] with greater scale in automotive [Internet of Things] security and networking with their highly complementary products and world-class sales channel."

"The combined company will be a technology and semiconductor leader with future annual revenues projected to be more than $30 billion," the executive added.

As far as when the deal is expected to close, Mollenkopf said that it "remains on track to close by the end of calendar 2017."

"We have regulatory clearance in four jurisdictions, including here in the U.S. and Taiwan, and we continue to make progress in our work with regulators in five remaining regions," Mollenkopf explained.

Still expects to be a key supplier to Apple

Although the legal battle between Qualcomm and Apple seems ugly, Mollenkopf made it clear that despite this battle, Qualcomm plans to keep supplying its legal rival with cellular modems and related auxiliary chips.

"We have had a strong relationship with Apple for many years, and they have been a long-standing and valued customer," Mollenkopf said. "We intend to continue to provide them with our industry-leading products and technologies as we always have and do our best to remain a good supplier to Apple, even while the dispute continues."