Investors don't seem to have been too terribly impressed with what Textron (NYSE:TXT) had to tell them, at least insofar as second-quarter 2017 earnings went.

The company earned $0.57 per share, $0.02 better than analysts had expected. Sales likewise exceeded expectations -- barely -- coming in at $3.6 billion where Wall Street had been expecting $3.59 billion. Gains in sales at Textron Bell (up $21 million) were entirely offset by declines in sales at Textron Aviation (down $25 million). Sales declined at Textron Systems as well (down $10 million), while a $109 million increase in sales at Textron's industrial division were, by management's own admission, "largely due to the impact of the Arctic Cat acquisition."

Investors reacted to the ho-hum quarter much as you might have expected them to: Textron stock rose all of $0.02 on earnings day (then declined 1.8% the day after). But better news may be coming. 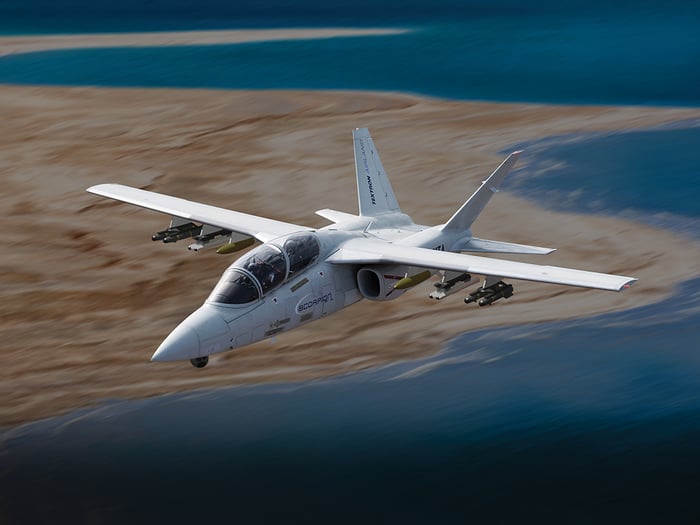 Some Scorpion news was delivered by airmail, along with Textron's earnings this week. Image source: Textron.

The real news at Textron, if you ask me, is yet to come: whether its investments in the Scorpion jet will pay off.

The Scorpion, as you probably know, is the fighter jet that Textron has built with off-the-shelf parts, to sell "on spec" to the Pentagon (and foreign buyers). Sadly, Textron has recently decided not to put the Scorpion jet into contention for the Air Force's T-X trainer jet competition, meaning the company essentially ceded a market opportunity of anywhere from $16 billion to $50 billion to Lockheed Martin and Boeing to fight it out between themselves.

That said, not all hope is lost. As I explained back in May, there's a second Air Force opportunity for Scorpion coming up next month. That's when Textron and Embraer (NYSE:ERJ) will meet up and face off in the skies over Holloman Air Force Base in New Mexico to demonstrate the capabilities of their respective aircraft to supplement, or replace, the A-10 Thunderbolt II ground support aircraft as part of the OA-X competition. Textron will actually be putting forward two entries in this competition, its AT-6 Wolverine turboprop fighter and its Scorpion jet fighter aircraft.

Either plane could win (as could Embraer's A-29 Super Tucano). Scorpion, though, was the one getting all the attention from analysts on Textron's after-earnings conference call.

Textron CEO Scott Donnelly noted that the company has been continuing to pour money into the Scorpion project as it prepares its "first couple of production aircraft" to demo at Holloman AFB. Whether that investment pays off depends on the following.

Grading on the curve

As Donnelly explained, the OA-X competition will "put these aircraft through their paces [in] a bunch of different mission scenarios." Evaluation of the three aircraft competing -- two from Textron, and one from Embraer -- will run "over the course of ... August, maybe into [the] beginning of September." So it will be a while before we know the results of the competition.

That said, according to Donnelly, the Air Force hasn't established any specific pass-fail criteria for the testing. At this point, the Air Force just wants to find out "what the aircraft are capable of" to see if they're suited for replacing, or supplementing, the A-10. After that, the Air Force will review the data and decide "what they think their next step is."

Why the competition is important

By my estimates (based on the value of a 2012 Afghan Air Force contract for which the AT-6 was competing), OA-X could yield as much as $6.4 billion for whichever company wins a contract, or 30% more than Textron's entire revenue stream from all of its Textron Aviation division last year. That's if any contract results, of course, and assuming the Air Force buys all 300 OA-X light attack aircraft that it's contemplating buying. But those first $6.4 billion could be only the start.

As Donnelly went on to explain to the analysts, Textron has been working hard to introduce Scorpion to "foreign customers." Saudi Arabia, in particular, is said to be shopping for $2 billion worth of light attack fighters for the Royal Saudi Air Force. Foreign customers, says Donnelly, are a "key focus" for marketing the Scorpion, and he believes that they will be "watching and waiting to see ... what happens with the Air Force OA-X experimentation program." Not to put too fine a point on it, but once the Air Force puts its seal of approval on one of the three planes competing, that might be the green light that convinces foreign buyers to ante up and order some new fighters.

All of which is to say that while Textron's earnings news was grabbing all the headlines this week, the best news (or the worst) may still be yet to come.