Please ensure Javascript is enabled for purposes of website accessibility
Log In Help Join The Motley Fool
Free Article Join Over 1 Million Premium Members And Get More In-Depth Stock Guidance and Research
By Rick Munarriz – Jul 23, 2017 at 10:16AM

The reeling burrito roller hits a four-year low after a pair of brand-smacking developments.

When it rains, it pours for Chipotle Mexican Grill (CMG -0.84%) shareholders, and the past few days have been a deluge. The burrito roller's stock took a 12.8% hit last week, following a double dose of bad publicity.

The first hit came on Monday, after Chipotle had to temporarily close one of its Virginia locations following reports, which were later confirmed, of a norovirus outbreak. It sanitized the store and reopened on Wednesday, but then a video went viral with mice scurrying around the dining area of one of its eateries in Dallas. 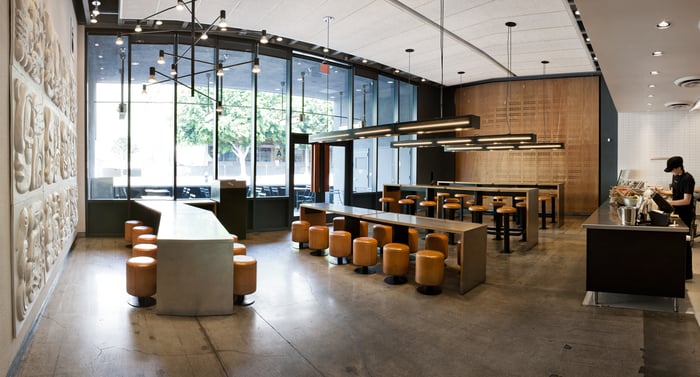 Between a guac and a hard place

Bad breaks happen, but Chipotle investors figured the days of foodborne-illness outbreaks were in the past after the chain introduced new food-safety measures. The stock and store traffic took big hits after a couple of well-publicized outbreaks in late 2015, but comps were starting to bounce back, though they were still far removed from peak 2015 levels. Now the fear is that the brand's recovery will get tripped up as diners grow concerned about food safety again.

The Dallas report is a bit more bizarre, especially since the original customer report claimed the mice started falling from the ceiling. Chipotle blamed a small structural gap in the building for giving the rodents access and committed to making quick repairs. It also reopened the Virginia restaurant on Wednesday. The fixes are easy on both fronts, but repairing consumer perception is the more challenging task.

In fact, by the end of the trading week, shares of Chipotle hit a low not seen since the spring of 2013. The bullish hope is that analysts will pounce on the chance to pump up the stock as a buying opportunity after the sell-off, but that's not happening.

John Staszak at Argus downgraded the stock from "buy" to "hold" on Friday morning. He sees the latest norovirus episode as denting sales, margins, and -- more importantly for investors -- the stock's valuation. He's lowering his profit targets to $8.10 a share this year, after earlier modeling $9. He's also adjusting his earnings-per-share forecast for next year, taking it from $12.50 down to $12. He's still encouraged by the the chain's long-term prospects, but it's hard to fight the near-term trend.

Lynne Collier at Canaccord is maintaining her "neutral" rating on the stock but slashing her price target from $440 to $400. Collier thinks the past week's negative headlines will delay the sales recovery.

We won't have to wait long to hear Chipotle tell its side of the story. The struggling chain reports quarterly results on Tuesday, and you know the conference call is going to be more intense than usual. Last week's events took place after the end of the second quarter, but it will be interesting to see if current traffic trends following last week's setbacks trigger a guidance revision.