Please ensure Javascript is enabled for purposes of website accessibility
Log In Help Join The Motley Fool
Free Article Join Over 1 Million Premium Members And Get More In-Depth Stock Guidance and Research
By John Maxfield – Jul 21, 2017 at 11:11AM

There’s a difference between a pattern and an isolated incident.

There was a time when Chipotle Mexican Grill (CMG 1.77%) was the most enticing restaurant stock in the market, but no more. After yet another norovirus outbreak at one of its locations, and a video of mice in a separate location, Chipotle's stock is careening toward a new 52-week low.

The norovirus incident happened at one of its restaurants in Virginia. And while there was early speculation that the incident may have been manufactured by short-sellers to drive down Chipotle's stock, it's now clear that there was indeed an actual outbreak. Reuters reported on Thursday that a customer who visited the location in Virginia tested positive for norovirus. Chipotle had closed the restaurant for two days last week in response to the concerns.

"While the restaurant was closed, multiple teams performed complete sanitizations of all surfaces," said CEO Steve Ells. "We also provided support to any customers or employees who had reported illness to ensure their well-being."

The incident with mice happened at a location in Dallas, where at least one diner captured cellphone video of multiple rodents in the dining area. Chipotle called it "an extremely isolated and rare incident."

The problem with this explanation is that these instances are no longer "extremely isolated and rare." They follow on the heels of similar instances in 2015 and 2016 that involved outbreaks of not only norovirus but E. coli as well.

It's the pattern that's problematic. If you're a lawyer, this may sound familiar. Here's Rule 406 of the Federal Rules of Evidence, which dictates what evidence is admissible in a court of law:

Evidence of a person's habit or an organization's routine practice may be admitted to prove that on a particular occasion the person or organization acted in accordance with the habit or routine practice. The court may admit this evidence regardless of whether it is corroborated or whether there was an eyewitness.

We're not in a court of law, but the point is that there's a difference between how investors, like lawyers, should view an isolated incident versus a pattern, habit, or routine.

The latter are systemic. The former are not.

Another problem with the explanation, as my colleague Jeremy Bowman pointed out, is that aside from responding to specific media outlets, Chipotle hasn't issued a press release explaining what happened. I'm not a PR person, so I don't know the rationale behind this, but it creates the appearance, fairly or not, that the chain isn't being forthright with customers.

This is an important point, because the appearance of impropriety can be just as harmful for a company's reputation as impropriety itself. In this context, it's very much true that perception is reality. 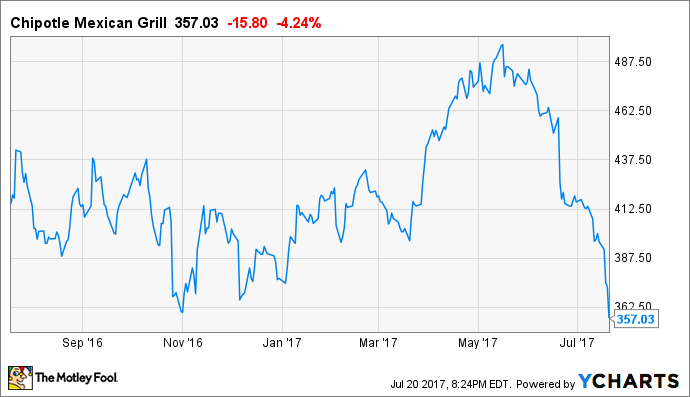 I've argued in the past that investors were being short-sighted when it came to Chipotle. I believed that, much like virtually every other major restaurant chain in the United States which has dealt with a foodborne illness outbreak, its stock would recover.

Sure, it'd take time -- 18 months, said CNBC's Jim Cramer -- but if the incidents were isolated, they'd soon be forgotten by consumers. Of course, now we know they're not.

This doesn't mean investors should avoid its stock altogether, as there's a price at which virtually any stock is attractive. But there's just no way, in my opinion, that investors can justify paying 30 times the company's next year's estimated earnings for its stock given these latest incidents.

It's hard to deny that Chipotle has a commendable vision of serving fresh and often locally sourced ingredients, but this vision is meaningless if customers think they're going to get sick eating the food.