Please ensure Javascript is enabled for purposes of website accessibility
Log In Help Join The Motley Fool
Free Article Join Over 1 Million Premium Members And Get More In-Depth Stock Guidance and Research
By Dan Caplinger - Jul 23, 2017 at 11:32AM

Can these strong performers keep up their momentum?

The bull market in stocks has lifted account balances for millions of investors, but many have missed out on the strongest performers in the market. Over the past three years, NVIDIA (NVDA -0.38%), Universal Display (OLED -1.31%), and National Beverage (FIZZ 1.15%) have all at least quadrupled investors' money. Investors who are late to the party want to know whether these stocks have any further to run, so let's a closer look at each company and what its prospects look like. 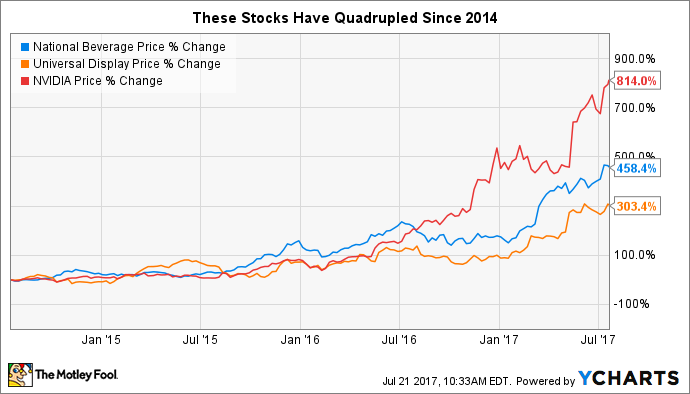 NVIDIA is winning the game

NVIDIA is a leader in graphics processors, and applications for graphics chips have multiplied in number in recent years. The video game industry has been extremely strong, with innovations making it increasingly important for game consoles and computers to be able to provide fast speeds for users. The rise of cryptocurrencies such as bitcoin has also contributed to growth for NVIDIA, whose chips are useful for those engaging in bitcoin-mining operations.

NVIDIA has a number of initiatives that it hopes will be game-changers for the company. The chipmaker has moved into the automotive industry, looking to help with self-driving--car technology that is inexorably gaining ground as a future trend. The artificial-intelligence (AI) platform that it hopes to build out to help on the auto front could also be of use in optimizing operations elsewhere, and NVIDIA is working to provide graphics processing units that are fast enough to train AI systems quickly as well as data center products to help cloud computing initiatives move forward faster. All told, NVIDIA has plenty of future potential, and even a sky-high stock price could have further to run. 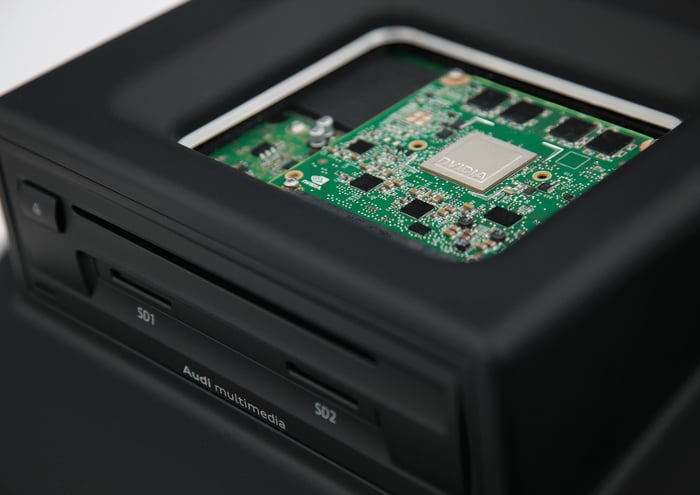 Light-emitting diodes have become ubiquitous in modern society, playing roles in lighting, television, and smaller electronic devices. Universal Display has been at the forefront of a wave of innovation in LEDs, with its organic light-emitting diodes offering considerable advantages over its conventional counterparts.

Much of Universal Display's gains in recent years have come as investors speculated whether OLEDs would play an important part of advances in display technology. It's taken a while for the company to reach its full potential on that note, but just in the past several months, reports that a Universal Display OLED screen could make it on to the next model of the iPhone have made shares soar. The stock has already climbed in anticipation of such a move, but if reports turn out to be true when the iPhone gets released later this year, then it could create another wave of enthusiasm for Universal Display stock and send share prices still higher.

Finally, National Beverage has enjoyed substantial gains. The beverage maker languished for years as sales of its proprietary and store-brand soft drinks produced steady but uninspiring growth. That all changed in 2015, as National Beverage implemented strategic changes that reflected the lack of popularity of sugary soft drinks. Instead, the drink maker focused on healthier products such as its LaCroix sparkling water, and consumers responded by giving National Beverage impressive growth in sales. The stock's gains show how the move toward healthier drinks helped the company.

In bull markets, a handful of stocks often account for much of the stock market's overall gains, and these three stocks stand out from the crowd. Don't expect them to quadruple again in short order, but there's still room for further profits if these companies can keep executing as well as they have over the past three years.