Please ensure Javascript is enabled for purposes of website accessibility
Log In Help Join The Motley Fool
Free Article Join Over 1 Million Premium Members And Get More In-Depth Stock Guidance and Research
By Leo Sun - Jul 23, 2017 at 11:36AM

Can the chipmaker’s biggest profit driver recover from its recent missteps?

However, that earnings beat was overshadowed by a 42% year-over-year decline in licensing (QTL) revenues, which fell to $1.2 billion. That decline offset improvements in the company's chipmaking (QCT) business, which grew its revenue by 5% to $4.1 billion on robust demand for its flagship Snapdragon chips.

The ongoing decline of Qualcomm's QTL business is deeply troubling, since that higher-margin business generates most of its profits. Is the chipmaker's biggest profit driver about to collapse, or are those fears overblown?

Qualcomm's QTL unit owns a massive portfolio of wireless patents, which entitles it to a cut of the wholesale price (up to 5%) of each smartphone or connected device sold worldwide. As certain patents expire, Qualcomm develops or acquires new technologies to keep those licensing fees rolling in.

Last quarter, the QTL business generated 22% of Qualcomm's revenue but 66% of its non-GAAP EBT (earnings before taxes) compared to 82% in the prior year quarter.

What problems does the QTL business face?

That's why Qualcomm was fined $975 million and forced to lower its fees in China, and fined another 1.03 trillion won ($920 million) in South Korea. It also faces similar probes in Taiwan, Europe, and the United States. The Federal Trade Commission also claims that Qualcomm leveraged its patent portfolio to marginalize rival chipmakers by forcing OEMs to pay higher fees for using competing chips. 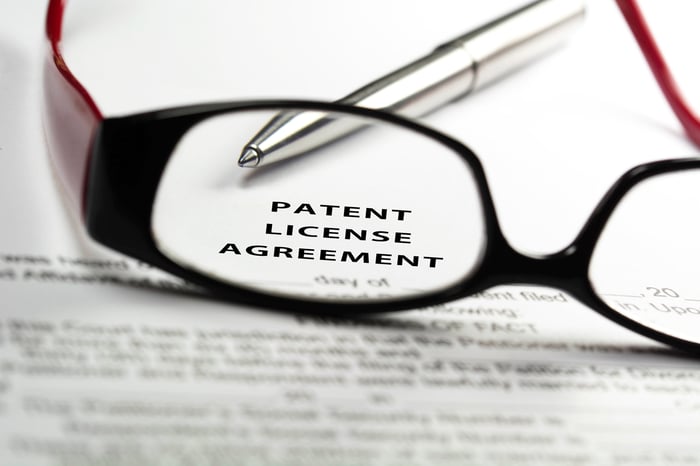 Many other tech giants have joined the attack against Qualcomm. Samsung (NASDAQOTH: SSNLF) alleges that Qualcomm prevented it from selling its Exynos chips to other OEMs by holding a patent deal from 1993 over its head. If Samsung sold those chips to other OEMs, either Samsung or the OEM would need to pay Qualcomm extra licensing fees.

Intel (INTC 2.15%) claims that Qualcomm refuses to license essential patents to its direct competitors, and that it uses exclusive deals to maintain its control over the mobile chip market.

But the biggest headache is Apple...

Apple (AAPL 3.55%), which exclusively used Qualcomm's baseband modems from 2011 to 2016, claims that the chipmaker's licensing business model is "illegal", and is suing it for unpaid rebates related to their exclusivity agreement. Apple also halted all licensing payments to Qualcomm earlier this year, which contributed heavily to the QTL's unit big declines last quarter.

Qualcomm responded by suing Apple's suppliers for unpaid royalties. It also countersued Apple, seeking to block certain iPhone models from being sold in the U.S. on the grounds that they used its patents.

This battle will likely drag on for years and hurt both companies. Qualcomm will lose modem revenue as Apple inevitably shifts more production to Intel, and Apple will get stuck with slower modems and possibly be hobbled by production delays, additional lawsuits, and bans.

What's next for the QTL business?

Activist investor Jana Partners once tried to convince Qualcomm to split its QCT and QTL businesses into two companies. But Qualcomm refused, declaring that it needed the higher-margin QTL unit to support the lower-margin QCT unit.

Jana eventually gave up and sold its stake in Qualcomm, but splitting into two companies could reduce the regulatory heat. It could possibly sell the business to another company, while retaining a stake in it with exclusive licensing agreements -- similar to what it did after it sold its CDMA module business to Sierra Wireless.

However, Qualcomm likely hopes that closing its planned acquisition of NXP Semiconductors (NXPI 1.85%) will kill two birds with one stone. That deal would diversify its QCT unit away from mobile chips by making it the top automotive chipmaker in the world, and expand its patent portfolio -- giving it the legal clout to counter OEMs and regulators.

A rocky road ahead...

Qualcomm doesn't see the situation improving anytime soon, and it expects QTL revenues to drop 31%-47% annually during the current quarter. Analysts see its revenue and earnings respectively falling 2% and 6% this year.

But as I said before, Qualcomm is still a cheap stock with a high dividend. Investors who can stomach the near-term volatility might be well-rewarded after the NXP deal finally closes and it finally moves past its legal woes.