Another foodborne illness outbreak at the burrito chain has sent shares into free fall.

Every company wants to be on top -- to be admired by analysts and commentators, and feared by competitors.

But like the narrative arc in a Shakespearean drama, companies that reach the apex of success are just a step away from a return to their humbler origins.

So goes the story of Chipotle Mexican Grill (CMG 2.00%) over the past year and a half. 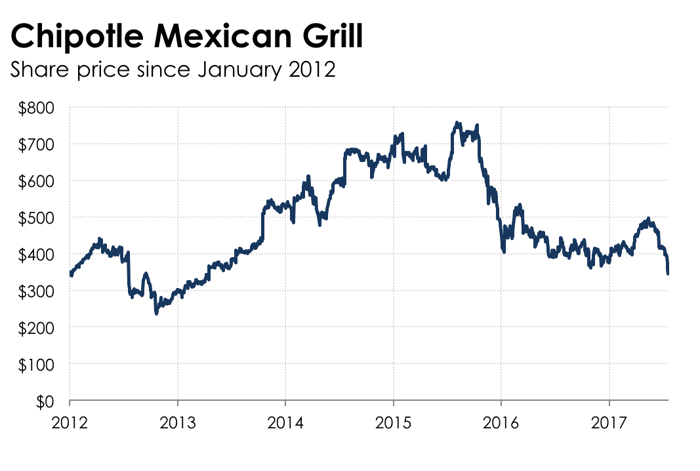 Just as the burrito chain began to emerge from under the shadow cast by a series of foodborne illness outbreaks in late 2015 and early 2016, the company is now back at square one, following reports that customers at one of its locations contracted norovirus earlier this month.

The news sent Chipotle's share price careening down. Shares are now at their lowest level since 2013, wiping out four years of gains.

Whether Chipotle can fully recover from this latest incident remains to be seen, given the cumulative damage to its reputation in the eyes of consumers. Unlike peers who never faced the intense scrutiny of making it to the top, Chipotle now has very little room for error.