In one corner stands Verizon Communications (NYSE:VZ), heavyweight champ of the U.S. wireless industry with 114 million subscribers. In the other is AT&T (NYSE:T), the No. 2 ranked competitor and current challenger for Verizon's title belt.

Together, these telecom giants control about two-thirds of the U.S. wireless market. They both generate robust profits and pay bountiful dividends of more than 5%.

But in the battle for investors' dollars, which of these wireless titans will emerge victorious and be named the better buy today? Read on to find out. 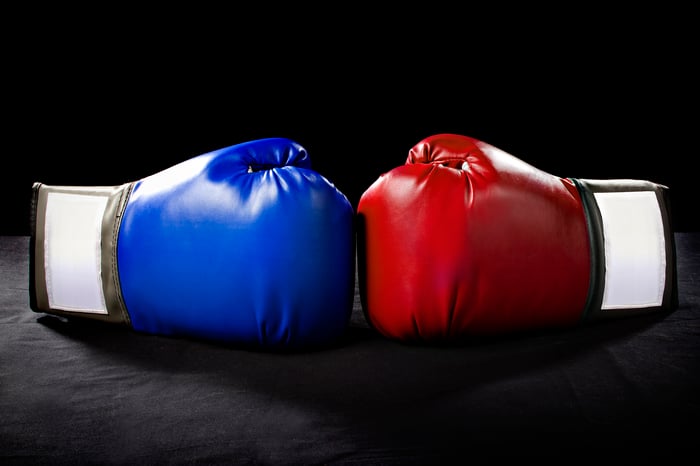 When it comes to telecoms, competitive advantage is often determined by the strength of a company's wireless network. And while evidence suggests that the difference in network quality among the major U.S. wireless carriers is shrinking, Verizon still holds an edge over AT&T in this regard.

AT&T, however, isn't just standing still. The company is competing not only on the performance of its wireless network, but also on the total value it can provide to consumers. Thanks to its $49 billion acquisition of DIRECTV in 2015, AT&T can offer its customers a bundled package of services including wireless, home phone, internet, and pay TV. In this way, AT&T is hoping that its customers see this bundle as an even greater value than the sum of its parts. And based on some customer loyalty surveys, it appears to be working.

Still, Verizon's reputation for superior network quality is a valuable competitive advantage, and it gives it a slight edge over AT&T in terms of economic moat.

Investors typically look to the telecom sector for two things above else: capital preservation and income generation. As such, a telecom's financial fortitude is of the upmost importance. Let's take a look at how Verizon and AT&T stack up in this regard.

Here we see that AT&T leads in nearly every metric. Its most pronounced advantage is in regards to free cash flow, where it outmatches Verizon by a whopping $17 billion. In fairness, Verizon had some one-time items dent its reported cash flow over the last 12 months, but its cash production has been trending down over the last several years. Ultimately, it's free cash flow that allows companies to reward their shareholders with dividends, and AT&T's commanding lead in this important metric helps it take this round.

No better buy discussion should take place without a look at valuation. Let's check out some key value metrics for Verizon and AT&T, including forward and trailing price-to-earnings (P/E) ratios.

Verizon seems like the better bargain until you look at the PEG -- or price-to-earnings-to-growth -- ratio, which in my opinion is the most important out of these three metrics. The sizable variance in Verizon's and AT&T's PEG ratios is due to the fact that analysts are expecting AT&T to grow its earnings at an annualized rate of 7% over the next five years, compared to only 2.5% for Verizon. With their forward P/E ratios being pretty close, this large difference in expected growth rates results in Verizon's PEG coming in at more than 2.5 times that of AT&T. Investors' returns from this point forward will be determined by these companies' future profits -- as opposed to their trailing earnings -- so AT&T's sharply lower PEG makes it the better bargain.

AT&T, in a surprise upset, takes down Verizon in this heavyweight bout. Verizon's network quality lead isn't quite what it once was, and AT&T's superior cash flow generation and better valuation outmatch anything Verizon beings into the ring. For investors seeking a high-yield stock in the telecom sector, AT&T is the better buy.