Please ensure Javascript is enabled for purposes of website accessibility
Log In Help Join The Motley Fool
Free Article Join Over 1 Million Premium Members And Get More In-Depth Stock Guidance and Research
By Rick Munarriz - Jul 24, 2017 at 9:07AM

The company that put fast casual on the map reports quarterly results on Tuesday afternoon. The fresh financials come at a lousy time.

Momentum isn't being kind to Chipotle Mexican Grill (CMG 1.76%) investors as we approach Tuesday afternoon's quarterly report. The stock hit a fresh four-year low last week, as a food-borne-illness outbreak in one restaurant and a mouse infestation in another made it a week to forget for Chipotle's spin doctors.

Wall Street, for its part, is holding out for a quarter of redemption for Chipotle. They see revenue soaring 19% to $1.19 billion, a combination of positive comps and brisk expansion. Chipotle began the quarter with 11% more restaurants than it had a year earlier, and unit-level sales should have no problem growing after last year's 23.6% second-quarter plunge. 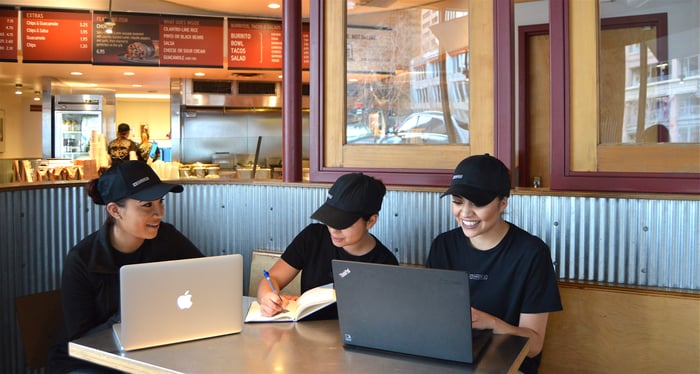 Bottom of the burrito basket

Earnings growth should be even more explosive. Analysts are forecasting a profit of $2.19 a share, 152% ahead of the prior year's $0.87. That's heady growth, but it's also important to frame the improvement correctly. The fast-casual chain came through with net income of $4.45 a share during the second quarter of 2015. In other words, Chipotle's likely to earn roughly half as much as it did a year earlier.

The real test in light of last week's developments will be Chipotle's guidance. Back in April, Chipotle was targeting comps to climb in the high single digits for all of 2017. It was also eyeing 195 to 210 new restaurant openings this year, a range it reiterated just last month. It will be interesting to see if last week's setbacks finds Chipotle taking a more cautious stance in terms of both its comparable-restaurant sales projections and its expansion plans.

Analyst moves ahead of the report aren't encouraging. Argus' John Staszak lowered his rating from "buy" to "hold" on Friday. Lynn Collier at Canaccord slashed her price target from $440 to $400. They may be reacting more to last week's news than Chipotle's actual fundamentals, but there are certainly fears that last week's incidents will weigh on results in the near term. Staszak's downgrade was accompanied by markdowns on his profit outlooks for this year and next year. Collier thinks the brand-tarnishing incidents will slow Chipotle's sales recovery.

The news, however, hasn't been all bad ahead of Tuesday's fresh financials. Telsey Advisory analyst Bob Derrington did upgrade the stock during last week's chaos, arguing that it's a buying opportunity. Hedge fund manager Bill Ackman also came to the chain's aid, tweeting a photo of himself at a seemingly busy Chipotle.

Ackman's hedge fund had taken a nearly 10% stake in Chipotle late last year. Of course, a thousand photos of investors at active Chipotles won't save the stock from hitting new four-year lows if the report after Tuesday's market close is disappointing, but what will helps is a period of reasonable growth and firm guidance.