If you flip on the television for stock-market news, you're likely to be bombarded by newsworthy developments from exciting stocks. Companies in Silicon Valley, massive financial institutions, and even Detroit automakers dominate for good reason: They're extremely interesting! But one great thing about the stock market is that boring companies can excel just as easily. And while Iron Mountain Incorporated (NYSE:IRM) and Procter & Gamble (NYSE:PG) won't catch your eye on TV, they're two great dividend stocks that you probably forgot all about.

Most publicly traded companies seek growth -- through expansion of product lines, reaching new markets, and acquisitions, to name a few strategies -- but it's not nearly as often that we hear about an addition-by-subtraction strategy. That's what Procter & Gamble has been trying to sell its investors on, and there's definitely an argument to be made that it's the right move for the massive company. 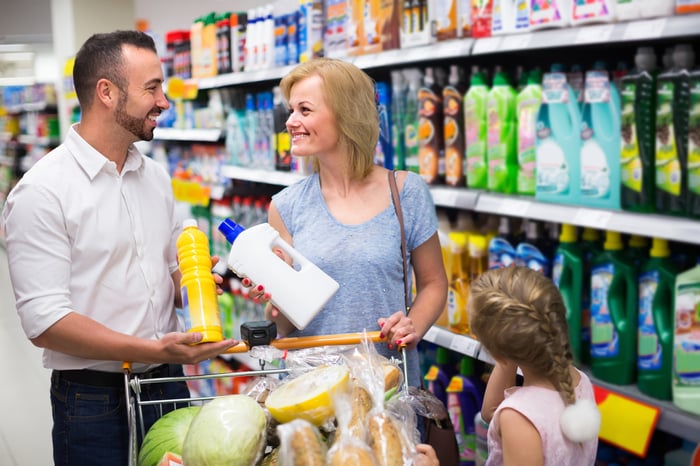 P&G's strategy was to eliminate a massive chunk of its portfolio by divesting roughly 100 brands, to settle on a core of 65 brands. Management believes this was a crucial step to drive growth, allowing the company to focus on fewer brands with more investments in the remaining brands. This move should help the company better innovate for the leftover brands and more quickly adapt to changing consumer trends, one of the critical aspects for a massive consumer-brand conglomerate.

Not only is generating stronger sales important, but management has also focused on cost savings, generating $10 billion in savings from its fiscal year 2012 to FY 2016 -- and the crazy part is the company believes it can save another $10 billion over the next five years. Its factories are increasingly producing multiple products, and its handful of new distribution centers, and fewer brands to boot, have enabled P&G to improve the efficiency of its shipping and transportation: 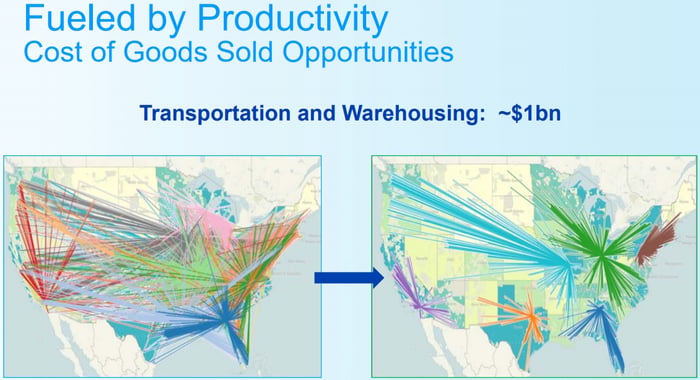 Right now the company pays its investors $2.76 annually for a healthy yield of 3.1%, but its track record is far more impressive. P&G has paid a dividend for 127 consecutive years and has increased its dividend for the past 61 consecutive years. There are risks, but if management can succeed with its strategy of addition by subtraction and better focus its capital and innovation on fewer brands, this could be a phenomenal dividend for investors.

Says an executive summary by IDC [emphasis is in original]:

Like the physical universe, the digital universe is large -- by 2020 containing nearly as many digital bits as there are stars in the universe. It is doubling in size every two years, and by 2020 the digital universe -- the data we create and copy annually -- will reach 44 zettabytes, or 44 trillion gigabytes.

As our lives become more and more connected and digital, the prospects for a stock such as Iron Mountain's could be sky-high. If you aren't familiar with the company, it's a global leader for storage and information-management solutions, with a network of more than 87 million square feet of space in 1,455 facilities across 46 countries -- quite the footprint.

Essentially, large customers pay Iron Mountain to store and protect their information, helping to reduce their own costs. It's a trusted name that serves 95% of the Fortune 1000, and spans the financial services, healthcare, energy, insurance, and legal industries. Iron Mountain isn't your typical stock, however, as it's a real estate investment trust (REIT). Furthermore, because its large customers rely on Iron Mountain to store and protect crucial data, switching from Iron Mountain to another competitor is risky; thus, the company has high customer retention, low turnover costs, and low maintenance capital expenditures.

The company has posted solid growth in recent years, with compound annual growth in global revenue checking in at 8.3% from 2013 through 2017's estimated guidance. Over the same time frame, its adjusted EBITDA (earnings before interest, taxes, depreciation, and amortization) jumped 11.3% (both figures are in constant currency). But the best part about owning shares of Iron Mountain is easily its dividend: It pays a total of $2.20 per share annually for a juicy 6.3% yield.