Honeywell International's (NASDAQ:HON) second-quarter results created a sense of déjà vu, leaving some analysts feeling that management was being conservative with regard to its outlook. Earnings of $1.80 came in at the high-end of management's guidance, and organic sales growth of 3% was significantly above the guidance range of 0%-2%. However, management merely raised the bottom end of its full-year guidance to $7-$7.10 from a previous range of $6.90-$7.10. Is Honeywell's management being too cautious with guidance?

For reference, here's a chart of full-year 2016 segment profit. 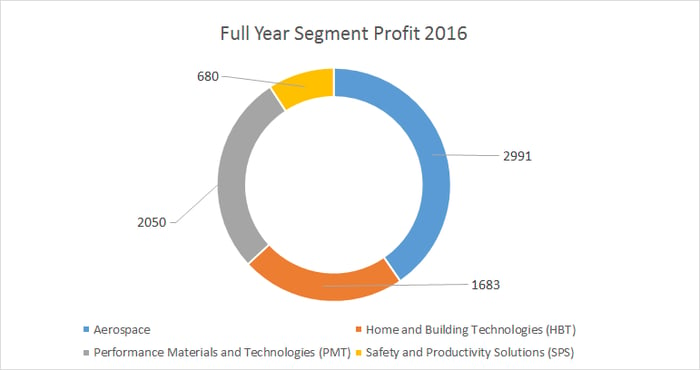 Now let's see how each segment performed in the second-quarter compared to guidance. The table below compares organic sales growth and margin expansion with the guidance given on the first-quarter earnings call.  As you can see below, total organic sales beat expectations, but margin came in at the low end of guidance. Essentially, aerospace -- the segment that disappointed in 2016 -- surpassed expectations with sales and margin expansion.

The other segment which disappointed in 2016, PMT, also saw sales beat expectations and margin at the high-end of the range. For reference, the PMT contains the UOP subsidiary, which saw its energy-spending-dependent sales of catalysts and absorbent to the processing industry fall short of management's original targets in 2016.

In a nutshell, the two segments that misfired in 2016, aerospace and PMT, are outperforming at present, while the other two are managing to offset less-than-expected margin performance with strong sales generation. Indeed, Honeywell now expects full-year sales in the range of $39.3 billion-$40 billion, compared to a previous estimate of $38.6 billion-$39.5 billion.

Let's focus on aerospace and PMT, coincidentally the largest two segments, in order to see where any upside potential might lie.

Readers already know that aerospace would be the key segment to look out for in the results, and the segment more than delivered. In fact, it's hard not to think management is being conservative in only guiding toward 0%-2% organic sales growth for aerospace in the third-quarter. Why?

There are three main reasons.

First, as you can see in the chart below, commercial aftermarket sales have grown at a 5% clip in the first two quarters.

Second, management continues to expect commercial original equipment (OE) incentives -- granted to win positions on new aircraft plaforms -- would turn from a significant headwind (see chart below) into a tailwind in the second-half of the year.

Third, CFO Tom Szlosek expects transportation systems (automotive turbochargers) to see a continued recovery in the commercial vehicle market with "modest growth in transportation systems" -- good news for key competitor BorgWarner Inc. (NYSE:BWA). However, CEO Darius Adamczyk later mentioned that "Diesel was down and it was down high single digit, but more than offset by growth in gasoline, growth in commercial vehicles and high-growth regions really, really took off." Frankly, it's not clear how the potential loss of diesel business will affect BorgWarner, even if gasoline business is strong -- something to look out for when BorgWarner reports. 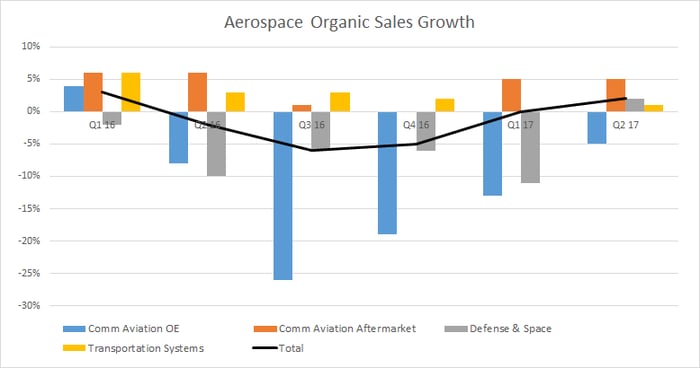 Indeed, the subject came up on the earnings call with a question from Goldman Sachs analyst Joe Ritche. Szlosek's response, in part:

"The incentives do come through, and if they do -- I mean that they will come through, if the aftermarket comes through like it did in the second quarter we should be definitely at the high end of that 2% organic if not pushing higher."

Frankly, it looks like Honeywell's management is being cautious with aerospace guidance, so don't be surprised if there is some good news in the third quarter. 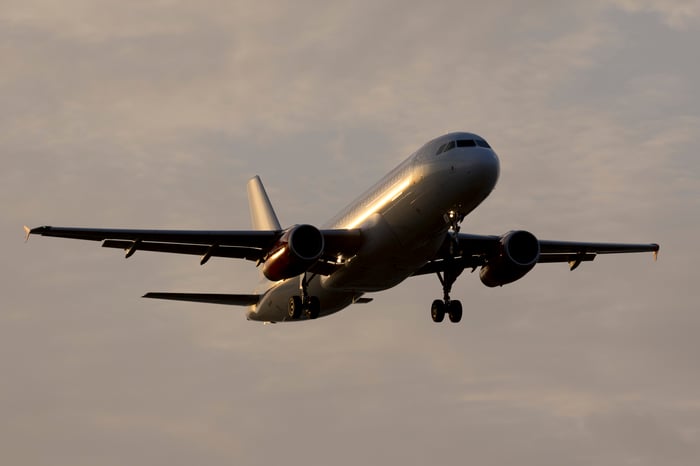 Honeywell International is positioned on the Airbus A320. Image source: Getty Images

As noted above, the PMT segment reported a strong quarter, and the indications are that there is more to come in 2017. Management guided toward 7%-9% organic revenue growth in the third quarter, with margin expansion of 130bp-170bp. It's worth noting that UOP organic sales were up 6% in the second-quarter and orders were up a whopping 40%, with the backlog now "pushing 20%'" according to Szlosek.

This is good news, because the stagnation in oil prices is obviously a concern for any business selling into the processing market. Adamczyk also argued that crude oil prices "north of $40" would mean "things are fine" for UOP.

If he's right, and oil prices continue to stabilize, then the PMT segment should do well.

All told, Honeywell's guidance looks beatable, and provided the aerospace market holds up -- the ongoing weakness in business jets remains a concern -- and crude oil prices stay above $40, Honeywell looks set for a good year. Management does indeed look like it's being cautious.