Here's everything you need to know ahead of the game maker's next quarterly release.

Electronic Arts (EA 1.24%) will report its fiscal first-quarter earnings on July 27, and the keys to a good quarter will be the performance of key games, particularly FIFA 17 and Battlefield 1, as well as growth in live services such as Ultimate Team.

For fiscal 2017 ending in March, EA expanded gross margin to 73.2% as more gamers continued to purchase content digitally instead of buying game discs. Management expects gross margin to reach 74.9% in fiscal 2018 with packaged goods revenue expected to decline 10% year over year, while sales of full game downloads are expected to grow 10% to 15%. 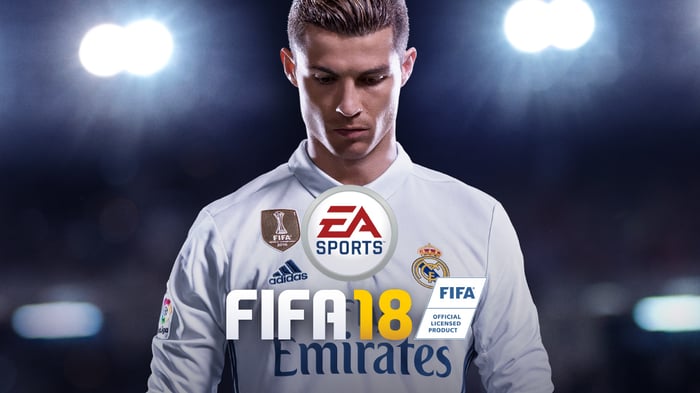 Additionally, EA has been centering its game portfolio around "live services" -- online game modes that the company updates with new content to keep players connected and engaged. This reduces EA's dependence on new game sales as players find additional content that increases the replay value of a certain game. As management continues to focus on its live service offerings, watch for digital revenue as a percentage of total net revenue to expand beyond its current 65% level, expanding margins in the process.

FIFA 17 has been one of the most popular sports titles with more than 21 million players joining the game in fiscal 2017. FIFA's Ultimate Team virtual card game has been very popular with players and should be a key contributor to digital revenue performance for the quarter. The FIFA Ultimate Team player base grew 13% year over year in the fiscal fourth quarter, and net sales specifically from the virtual card game increased 23%.

Also, Battlefield 1 has been showing strong growth and should be another key game to watch. Through the end of fiscal 2017, more than 19 million players joined Battlefield 1, which represents a 50% increase over the previous installment in the series.

Finally, this will be the first full quarter since the March release of Mass Effect: Andromeda, which was highly anticipated but got off to a rocky start after reports of several glitches in the game. The original Mass Effect trilogy was very popular and received great reviews. Andromeda, not so much. EA has been slowly rolling out software updates to fix the issues affecting Andromeda, so it will be interesting to see how well this game has sold.

Other than games, investors should listen for any updates on the conference call with respect to EA's plans for esports, which is emerging as a significant long-term growth opportunity for video game companies. During the fiscal fourth quarter conference call, CEO Andrew Wilson said, "competitive gaming and esports will be a key growth vector for us throughout fiscal 2018 as we expand the ways that fans can play and watch."

Ultimate Team serves as the "gateway" to esports for FIFA and Madden NFL, with FIFA 17 typically among the top 25 or so games viewed on Twitch.tv, where gamers spectate other gamers. Later this year, EA will kick off two championships for FIFA and Madden, and also launch the first Battlefield 1 competition. EA is lining up broadcast partnerships with major networks including ESPN and Univision, which should help grow the audience for these games.

For the fiscal first quarter, management is calling for non-GAAP net revenue to grow 10% year over year to $750 million. However, whether it meets analysts' estimates will likely have a bigger impact on the short-term direction of the stock price. Analysts are predicting non-GAAP net revenue to be $768 million, with earnings per share estimated to be $0.27.

Although analyst estimates are useful for serving as a heads-up for what to expect, we don't want to be suckered into Wall Street's game of selling or buying EA stock based on whether it misses or beats expectations. What's far more important for Foolish investors is how EA is positioned for long-term growth based on its progress toward building its digital platform of live services across console, PC, and mobile, in addition to how its positioned for emerging growth opportunities like esports.