Gilead should cut itself in two. Here's why.

That's seriously bad news from a value-creation standpoint. Gilead's hep C sales, after all, are already on track to fall by more than 65% over the next three years due to the dual headwinds of price erosion and lower demand.

Although the biotech's hep C woes have been weighing on its valuation for some time now, this latest competitive threat may finally force Gilead's hand on the business development front. All things considered, the biotech has three available choices:

In an odd twist, Gilead's best option -- and arguably least anticipated -- is to split the company into two. Here's why. 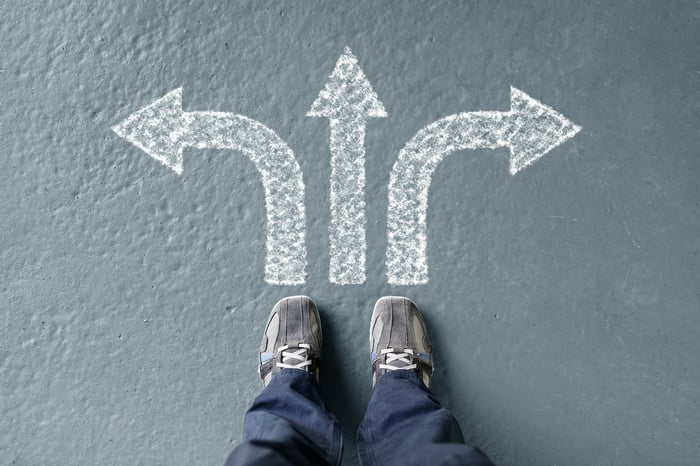 Standing pat and waiting for its clinical pipeline to mature seems to be management's preferred course of action. But it is clearly not the best option for shareholders. As proof, the market has been penalizing Gilead's stock due to management's inaction on the business development issue -- evinced by its rock-bottom forward price to earnings ratio of 9.78.

Even if the biotech can accelerate the development of its more attractive clinical assets such as its anti-inflammatory drug filgotinib, it simply won't be enough to head off the entry of AbbVie's latest hep C therapy -- or counteract the other negative headwinds that are literally crushing its hep C franchise right now.

Regarding a possible megadeal to bring in new sources of revenue, this idea seems dead on arrival for two reasons. First off, Gilead has largely shunned high-dollar business development deals in the past -- that is, outside of its roughly $11 billion deal to acquire Pharmasset. Megadeals, in other words, are simply not in the biotech's DNA -- especially ones that would be large enough (> $30 billion) to move the needle from a growth perspective at present. 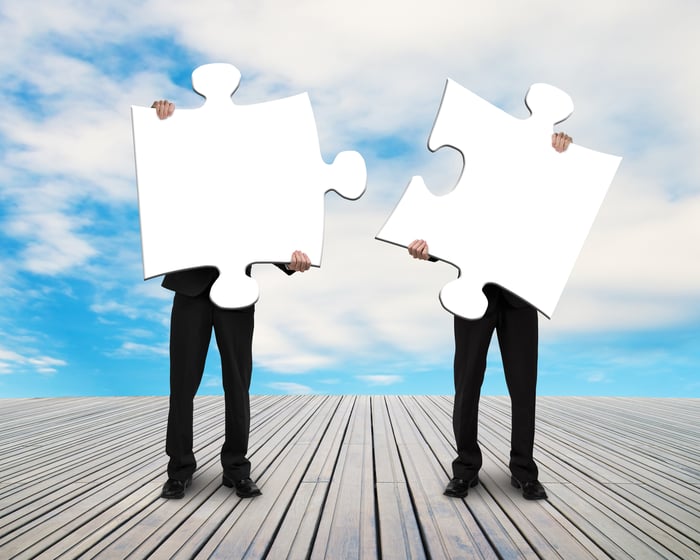 Secondly, Gilead's hesitation to go the megadeal route is rooted in some solid reasoning. Point of fact: Massive mergers and acquisitions in the pharma space have historically produced extremely poor returns on capital.

Pfizer, for instance, has repeatedly spent large sums to augment its clinical pipeline and product portfolio with rather questionable results. The drugmaker's latest multibillion-dollar acquisition of Medivation for its advanced prostate cancer drug Xtandi is already proving to be a dubious move from a return on investment standpoint. And that's just one example of many where high-dollar acquisitions in pharma haven't gone nearly as smoothly as planned.

The idea of Gilead splitting into two business -- one growth-oriented HIV business and another built around the biotech's hep C franchise and other liver disease assets -- isn't exactly new. Management, in fact, addressed this possibility head on with analysts late last year.

While Gilead's brass previously eschewed a break up, a split is unquestionably the single best option the biotech has on the table at the moment. There's tremendous value trapped in Gilead's HIV franchise thanks to its association with the company's plummeting hep C segment, after all. As a stand-alone, the biotech's HIV business should easily produce high double-digit sales growth over the next five or so years and, hence, merit a much richer multiple than the company is currently being assigned by the market.

As an added bonus, Gilead could continue to pursue its small to mid-size acquisition strategy that's worked wonders so far by splitting the company into two. It would arguably only take a handful of medium-sized deals, after all, to shore up the biotech's hep C business as a stand-alone.

The key takeaway is that Gilead could kill two birds with one stone by separating its HIV and hep C segments. A break up would allow its strong HIV sales to shine through, and the biotech wouldn't have to grossly overpay for a large, revenue-generating peer in a deal that almost certainly wouldn't maximize shareholder value.

Unfortunately, Gilead's management hasn't expressed much interest in either a megadeal or a split to address its faltering growth engine. So, while a split is one possible solution to unlock the biotech's trapped value and avoid a capital-intensive acquisition, investors can most likely expect more of the same out of the company moving forward.