Russia plus the internet equals Yandex -- here is how the company has taken over the taxi industry.

There is a whole lot going on when it comes to Russian search engine, web portal, and app aficionado Yandex N.V. (YNDX -6.79%). The company is playing a bit of the imitation game as it mirrors tech industry leaders like Alphabet but with a special sauce for the Russian market where it's no easy task establishing a foothold. The country came in at No. 40 in the World Bank ranking of economies based on the ease of doing business.

Although most of Yandex revenue is currently based on advertising, it has launched efforts in the taxi space that could reveal its designs for many different internet-based businesses in Russia. Earlier this month, the company announced a combination of its taxi business with Uber. If Yandex is successful, it could enjoy a natural moat provided by governmental barriers of entry in the world's 13th largest economy.

Russian taxi services bring in about $7 billion per year with major players, including Yandex, Uber, and Gett. Yandex leads the pack with about 55% of the market.

On July 13, Yandex and Uber announced they would join forces in the region. In a deal expected to close later this year, Yandex will take a 59.3% controlling interest (and Uber a 36.6% stake) in a new company valued at $3.7 billion. Employees of the company will own the remaining 4.1% stake. Tigran Khudaverdyan, currently the CEO of Yandex.Taxi, will become CEO of the combined business that boasts over 35 million cab rides per month.

Before Yandex launched its ride-hailing app in 2011 -- two years prior to Uber's arrival in Russia -- almost 90% of cab rides were hailed on the street. Yandex went to work, not by putting together its own fleet of drivers but working with cab companies to create a service network. This gave the company access to 60,000 drivers whose cab companies were happy to sign up under the Yandex brand.

How is the Yandex.Taxi business doing?

Based on ride volume, growth has been phenomenal, and the graph below illustrates that point. In December, Yandex.Taxi provided more than 16 million cab rides in Russia. 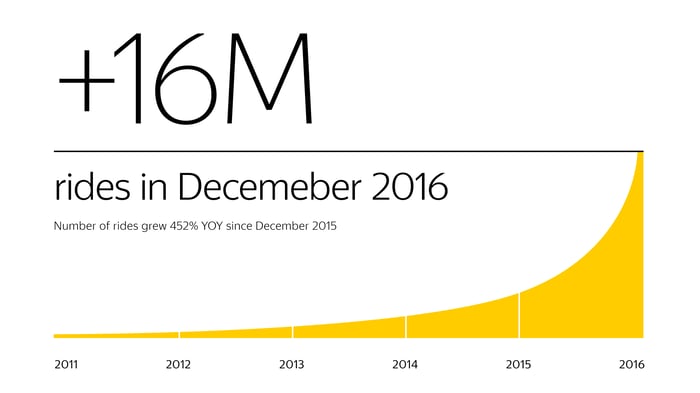 The first quarter results for this year continue to be encouraging with the service experiencing 484% year-over-year growth in rides and 75% growth in revenue. Yandex.Taxi is now available in 69 cities with populations over 100,000 in Russia, Ukraine, Armenia, Georgia, Kazakhstan, and Belarus.

The business itself is still in the earliest stages of development and because of fierce competition in the space, Yandex continues to cut prices to maintain market share. In the first quarter, the company said the service lost $20 million. Now that Yandex and Uber have teamed up, competition should decrease allowing prices to rise.

The company is also refining its ride-hailing app to provide customers with a more robust service. It recently introduced a new money-saving feature that allows customers to find smart pickup points that optimize routes for cab drivers and reduce fares for riders. The ability for Yandex to offer these smart pickup points is tied to other company offerings -- Yandex Maps and Yandex Navigator.

Driverless cabs on the horizon

Yandex is now working on autonomous vehicles, which many see as the end game for ride-hailing services. In late May, the company announced that it was building a prototype and that tests on public roads would begin next year. Here is how Dmitry Polishchuk, the head of Yandex.Taxi's self-driving project explained it in a company blog post:

Self-driving cars are set to revolutionalise the way we commute within a matter of a decade. At this point in time, there are dozens of companies around the world building their own driverless cars, but only a few of them have components crucial for turning this project into reality. These components include a stack of reliable technologies and algorithms, engineering expertise and resources, and access to the market for self-driving vehicles. Yandex.Taxi, with the backing of Yandex, is one of the few players who can boast of possessing all of the above.

As exciting as the taxi opportunity may be today, the Yandex revenue stream is supported mostly by advertising and search. Last year, only $38 million out of a $1.25 billion top linecame from the taxi business -- and the taxi business lost $35 million.

But the company is still looking far into the future as it floods the Russian marketplace with all things Yandex.