Let's have a closer look at how Buffalo Wild Wings fared over the past few months, as well as what investors can expect from the casual-dining chain going forward. 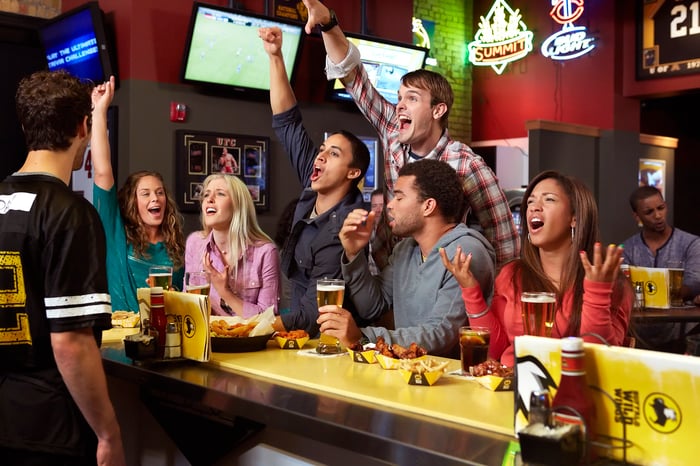 During the second quarter, we continued to work on stabilizing the business in the challenging restaurant environment. [...] As traditional chicken wing costs remain at historically high levels, we're adapting our value day on Tuesday to feature our boneless wings at company-owned restaurants. In addition, we continue to implement our cost savings plan to improve margins and profitability in areas we can control.

Under normal circumstances, we would have a meaningful level of testing and learning on this shift to boneless. Our very early learnings from two Tuesdays and 50 restaurants are encouraging, and we will be monitoring closely to ensure that the sales and margins achieve our intended results.

Given its relative underperformance in the second quarter and as it pursues its new promotional structure, Buffalo Wild Wings reduced its full-year guidance. The company now expects 2017 same-store sales to decrease in the range of 2% to 1% (down from previous guidance for growth of 1%), which should translate to adjusted earnings per diluted share of $4.50 to $5.00 (down from $5.45 to $5.90 previously).

In the end, apart from Buffalo Wild Wings managing to outperform the terrible comps of the casual dining industry as a whole, there wasn't much to like about this painful performance. And combining its freshly lowered guidance with the uncertainty surrounding the short-notice pivot of its popular Half-priced Wing Tuesday promotion to boneless, it's no surprise to see shares plunging in after-hours trading as of this writing.