McCormick just spent $4.2 billion to become the No. 1 condiment company in America. Here is a look at the deal that McCormick management could not refuse.

McCormick & Company Inc. (MKC 2.74%) recently announced it will acquire the food division of British consumer goods company Reckitt Benckiser Group plc in a $4.2 billion deal that is expected to close later this year.

Many products familiar to U.S. shoppers will join McCormick, including Frank's RedHot hot sauce, French's ketchup, French's mustard, and Cattleman's barbecue sauce. The deal will make McCormick the largest supplier of condiments in the United States.

The strategy of the deal

Health, hygiene, and home products produced the lion's share of Reckitt Benckiser's more than $12 billion in 2016 revenue. Its food division was expected to provide $581 million in 2017 sales and the business has been growing in the mid-single digits, according to McCormick's management.

The way McCormick CEO Lawrence Kurzius described it, Reckitt Benckiser's food division was a "food asset trapped inside a nonfood company. ... For us, this is going to be a core business, and we're going to treat it accordingly."

McCormick believes it can give the acquired brands a friendlier base of operations as its $4.4 billion in 2016 revenue came entirely from food products. Management feels the company's expertise in the food business can result in increased sales due to more exposure to both the industrial segment of the market (which includes customers like restaurants), where McCormick sold 40% of its products,  and internationally, where McCormick sold 42% of its products in 2016.

This deal is about Frank's RedHot sauce and French's mustard

McCormick is a leader in spices and seasoning, with about 20% market share in the packaged retail spices and seasoning category of foods on a global basis. The key brand that drove McCormick to make the acquisition is Frank's RedHot Sauce, the product with the largest growth potential in the portfolio of brands that came with the acquisition. McCormick sees Frank's RedHot Sauce as a "liquid spice" that's very popular with millennials and has a runway for growth. "... the hot sauce category and the Frank's RedHot brand, in particular, really drive the growth of the whole portfolio," said Kurzius.

Management believes it can expand Frank's brand beyond the United States and Canada by increasing its presence in the Asian marketplace, where Western condiments have become quite popular, particularly for table-top usage in restaurants, not a distribution channel that current ownership has access to.

McCormick management stated that their goal is to Make Frank's RedHot sauce the No. 1 global hot sauce brand.

The company is also quite keen on French's mustard, the No. 1 brand in the U.S. and Canada.

This deal did not come cheaply for McCormick, as there were other bidders in the mix. The Telegraph reported that both European consumer goods powerhouse Unilever NV and Hormel Foods Corp were also interested parties. The company viewed the purchase as a strategic acquisition and was willing to pay up to win the deal from these larger rivals.

The price tag was $4.2 billion, which is over seven times the food division's estimated 2017 revenue of $581 million. The chart below shows McCormick's price to sales multiple over the past three years, which barely ever reached three. 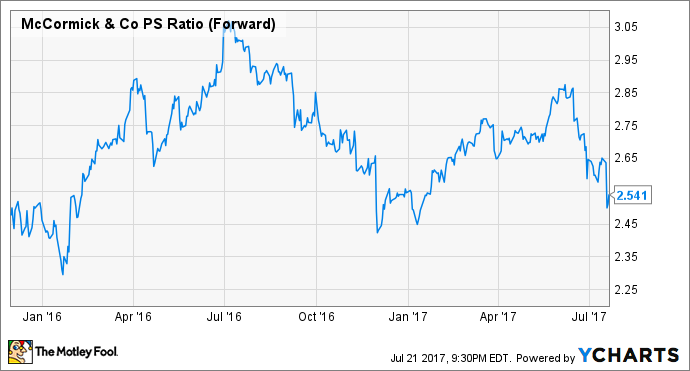 The price tag of $4.2 billion will be paid all in cash. McCormick will finance the deal in two ways. The company will work with lenders to borrow $3.7 billion. The other $500 million will come in the form of an equity offering of the company's stock. The company also announced, in light of the deal, it will suspend its share buyback program to conserve cash. Management reiterated that the company plans to continue issuing its quarterly dividend.

The additional debt the company will take on will increase its borrowings from $804 million at the end of last quarter to a projected $4.5 billion when the deal closes.

The company said it will update shareholders once the deal closes toward the end of this year. Until then, management will continue to focus on the current brands under the McCormick umbrella.

The company sees French's products being its No. 2 brand and Frank's RedHot Sauce as its No. 3 brand, both of which will help McCormick move up from its current position as the No. 10 condiments supplier in the United States to No. 1 stateside and No. 3 on a global basis.

This is a big investment for the company; the largest acquisition it has ever made. It is taking on a lot of debt to make the purchase. Time will tell if management is able to integrate the business, execute its plan, and reward shareholders with a higher stock price.