Chipotle Mexican Grill, Inc. (NYSE:CMG) announced second-quarter earnings on July 26, and there was a lot to like. The company showed more progress from its first-quarter results in April, with a huge jump in earnings year over year and sequentially. But another norovirus incident only days before earnings, followed by a video of rodents in another Chipotle restaurant, could have made all the progress made in recent quarters come to a screeching halt.

Keep reading to learn about the three things that stood out in Chipotle's earnings, as well as what could be the single most important thing investors should consider about the company right now. 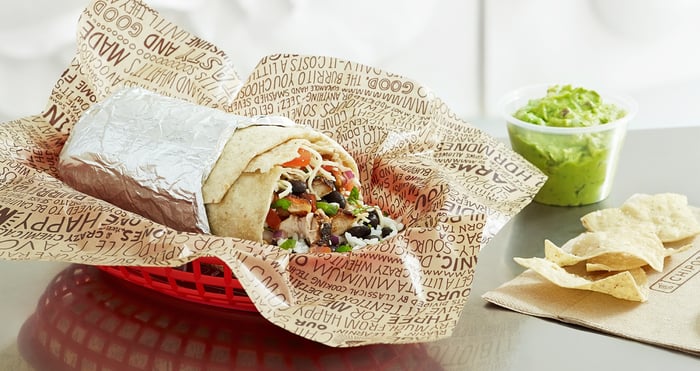 Chipotle's sales gains made all the metrics look better

Here are some key sales and financial metrics for Chipotle from last quarter:

The best way to describe Chipotle's sharp profit gains is sales leverage. The company spent more money in pure dollars on almost every operational category directly tied to restaurant ops, but higher revenues resulted in spending a smaller percentage of sales on each of these categories.

It was this sales leverage gain, which is visible in the quarter's big jump in restaurant-level operating margin, to 18.8% that drove the huge 160% surge in earnings. This was also a nice sequential gain, up from 17.7% in the first quarter.

Even during the worst days following the 2015 incidents, Chipotle continued to open new restaurants, though the company did make changes to how many and where it was opening them, focusing on its best markets to add new stores, and reducing the number of stores in new and remote markets. According to CFO Mark Crumpacker, the stores opened in 2016 have performed far better than the company's older ones. On the earnings call, he said the average Chipotle store has recovered about one-sixth of the sales lost from the 2015 peak, while stores opened during the worst of the customer fallout have regained about twice as much lost sales.

Crumpacker also pointed out that while the company isn't seeing the 50%-plus return on investment (ROI) from new stores before the 2015 incident, the ROI on new stores has been 31% this year, up more than double from 2016.

On the earnings call, he -- as well as CEO Steve Ells -- made it clear that his mission is to instill operational rigor at Chipotle. As Ells put it, the company had been "perhaps too focused on softer cultural kinds of things," and Boatwright made it clear that he wasn't going to be a soft and cuddly executive. He said the following in response to an analyst question on the call:

[W]hat I plan to bring to the organization here at Chipotle is a maniacal focus on the fundamentals of our business -- more specifically, ensuring the integrity of our training programs to lay a strong foundation for the organization's success. This type of rigor and discipline has been absent from the brand for some time, and we will reinstill, again, a maniacal focus on how we operate our business and one best way to run a Chipotle restaurant.

Reading between the lines, it would seem a lack of discipline led to the most recent norovirus incident, with a sick employee being allowed to -- or maybe asked to -- come to work.

On the call, management said multiple times that queso -- the delicious melted cheese that's ubiquitous in every American Mexican-food establishment not named Chipotle -- is the most requested menu item, and the company has finally started testing it. The initial tests are happening at the just-opened Chipotle Next Kitchen test restaurant in New York City, with plans to expand it to a few more markets in August. Management is very optimistic that adding queso to the menu could have big implications, bringing in new customers, regaining lapsed ones, and boosting average tickets for current regular customers.

The company is testing a new salad offering, its bunelos dessert, and frozen margaritas at the Next Kitchen as well.

Management also talked about improvements to its digital ordering process coming soon, including a completely new app later this year, and the rollout of digital technology for its second make line, where digital orders are prepared. Management says the 25 stores with this technology already have seen huge throughput gains on its second line.

Chipotle is also opening its first-ever "vehicular pickup window" at an Ohio restaurant this fall, where customers can pick up digital orders.

Mice and sick customers could reverse all the gains

This is potentially the most important thing investors need to consider today. Over the past two quarters, the company was finally distancing itself from the 2015 incidents that saw sales fall by more than one-third and the company report its first-ever quarterly loss at the bottom.

But a recent norovirus incident at a Virginia restaurant, which left dozens of customers sick and led to the temporary closure of the store for sanitizing, risks destroying all of those gains and bringing the company back to square one. The reality is that despite the isolated nature of norovirus, it's far more common than people realize. This is as much a perception problem as it is a real risk for customers, and if the company isn't able to convince people that they can feel safe eating at Chipotle, all the process improvements and dollars spent on marketing won't matter one whit. Toss in video of what appears to be mice falling from the ceiling of another Chipotle, and the company faces potentially another double-whammy PR crisis to navigate.

The company's ability to manage this crisis, the public's response to it, and new executive Boatwright's ability to instill the discipline and rigor that will prevent these outbreaks from happening, will be critical to how much -- and for how long -- the company's sales are affected by this latest incident.

Since the latest two incidents happened very close to the second-quarter earnings call, management wasn't able to offer much insight into how much impact they were having on sales. And unless the company decides to provide an update in the interim, we won't know for another three months whether sales are getting hammered or if this was just a blip on the radar. That creates significant uncertainty for investors.

Looking out years down the road, Chipotle should be able to manage through this crisis. Eventually, customers will forget and people will come back, and the company's economic model remains incredibly compelling. But how much will these latest incidents affect the company, and how long will it take for sales to recover? We just won't know the answers for some time to come. Caveat emptor.