Trading near all-time highs and valued at roughly 47 times forward earnings estimates, Take-Two Interactive (NASDAQ:TTWO) is priced for stellar performance and will be under the microscope when it reports first-quarter earnings on Aug. 2. Whether the company turns in another blockbuster quarter will mostly hinge on the performance of its hugely successful Grand Theft Auto V.

Strong unit sales and spending on the game's online mode have been at the heart of the publisher's tremendous stock performance over the last three years, and there are questions as to how long the title can continue to defy gravity. Take-Two is guiding for GTA V's sales to slow in the current fiscal year, which is sensible given that the title first launched in September 2013, but there are signs that point to the company's runaway hit once again surpassing expectations and driving another blockbuster earnings period. 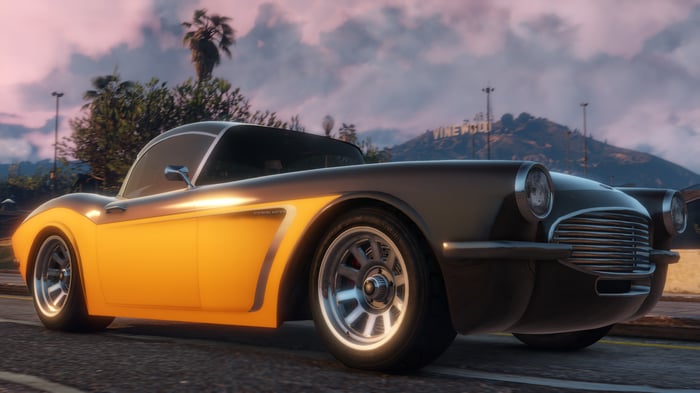 For the first quarter of fiscal 2018, Take-Two is targeting revenue between $390 million and $440 million. Hitting the midpoint would represent a roughly 33% year-over-year increase. Net income is expected to be between $74 million and $85 million, equating to earnings per share between $0.65 and $0.75 -- up substantially from a loss of $0.46 in the prior-year period. While the company is targeting for a sales increase, comments indicate that this result will be achieved by improved revenues from NBA 2K and its WWE games offsetting declines for GTA V.

Grand Theft Auto V has outperformed the company's expectations in every quarter since its release, but guiding for declining performance appears to be a responsible move by Take-Two. The Grand Theft Auto series has been a powerhouse since the release of Grand Theft Auto III in 2001, but with more than 80 million units shipped and a hugely profitable online mode, GTA V is a success on another level -- and one that has confounded typical sales modeling.

Here's what Take-Two CFO Lainie Goldstein had to say about the outlook on revenues from the game's online mode during the company's last earnings call, as per a transcript provided by Thomson Reuters:

Our guidance assumes that GTA Online will moderate in ... 2018. It did grow significantly in 2017, and we continue to support it. But since it's unlike anything else that we've ever had and we have very little visibility into how long it will continue this trend of growth, we've included it as moderating in this year's guidance.

While the company expects GTA V to slow down, that doesn't seem to be happening quite yet.

Grand Theft Auto V came in at No. 3 in the monthly U.S. charts in four of out of the six recorded calendar months so far, and placed as the sixth-best-selling title in both March and April. For a rough idea of what to expect from GTA V's retail sales contribution last quarter, here's a year-over-year comparison of the game's monthly American sales ranking for the April-June window across the last two years and a look at how the broader video game software market performed:

So, Grand Theft Auto's chart performance has remained remarkably consistent, while overall North American software sales have slumped due to a steep decline in the May retail month. However, May 2016 was a much bigger month for new software launches than May 2017, with last year's debuts of hit titles including Uncharted 4, Doom, and Overwatch, creating an unfavorable comparison for the month this year.

With that in mind, there's a fair chance that the base Grand Theft Auto V game actually increased year-over-year sales in America last quarter. The title continues to perform well outside the U.S. as well, placing as the third-best-selling game in the U.K. for both April and June and coming in as the territory's fourth-best-selling game in May. That's great news from a retail perspective, but, perhaps more importantly, it suggests that recurrent consumer spending in the game's online mode will see a sizable increase because the installed base is now significantly larger.

With the launch of a content update for Grand Theft Auto Online's Cunning Stunts mode in mid-March, the introduction of both Tiny Racers and Land Grab in April, and the debut of Gun Running in June, there were a range of catalysts for strong spending within GTA Online last quarter.

Looking at data from SteamCharts, which tracks games played on the PC gaming platform Steam, the average number of concurrent GTA V players for April through June increased 57% over the prior-year period. It's worth noting that average player numbers declined roughly 8% compared to the first quarter of the calendar 2017, however this makes sense given that there's some seasonality to video game engagement. That 8% sequential drop is also substantially below the 20% decline in average concurrent players from the first quarter to the second quarter of calendar 2016.

Granted, this only gives us a look at engagement on the PC platform, but it's reasonable to expect that online engagement trends are roughly similar on Sony's PlayStation and Microsoft's Xbox platforms.

Does this mean that Take-Two will crush earnings?

Based on indicators pointing toward strong performance for Grand Theft Auto V, it seems likely that Take-Two's revenues will come in at the top end of its sales target and it would not be surprising to see sales exceed its guidance range. The net income picture is more difficult to predict, as development expenses for the company's upcoming games, content expansions, and maintenance for its existing catalog could ramp up unexpectedly and come in higher than anticipated. That said, I think there's a good chance that GTA V will once again deliver a better-than-expected performance and help continue Take-Two's streak of beating earnings expectations.