The American Express Company (NYSE:AXP) reported its 2017 second-quarter earnings earlier this month, and the results provided a lot for investors to be happy about. The company's adjusted revenue and billed business growth both increased by a healthy 8% year over year. Total loan growth grew an even more robust 11% over the prior year's quarter. And American Express is still the best in the lending business, as evidenced by its 1.8% net write-off rate. While shares only mildly reacted to the news, that was probably mostly due to its run-up the previous quarter. As I write, shares are up almost 15% year to date and 9% since the start of June.

After reading through the company's conference call transcript provided by S&P Global, here are three more reasons shareholders in the longtime credit card company have to cheer the latest quarterly results. 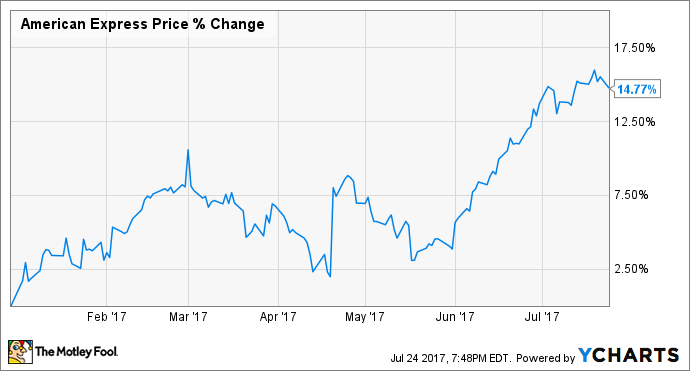 Though his voice was steady as he read his prepared remarks, the sense of relief was palpable as CFO Jeffrey Campbell announced that this would be the last quarter the company would have to adjust for the loss of its Costco Wholesale partnership from the year before. "I know we are all looking forward to next quarter on that front", Campbell stated.

For the past year, American Express has essentially reported two sets of growth percentages each quarter: Its actual revenue and earnings growth and the growth once adjusted for the loss of its Costco portfolio. While its actual earnings and revenue growth have been practically non-existent, American Express management has insisted that the adjusted numbers more accurately reflected the true state of its business. Over the past year, the adjusted numbers have shown consistent growth for such a mature company and this quarter was no different. The company's total revenues and billed business growth were a paltry 1%. Once adjusted, however, both showed a much more robust 8% growth. 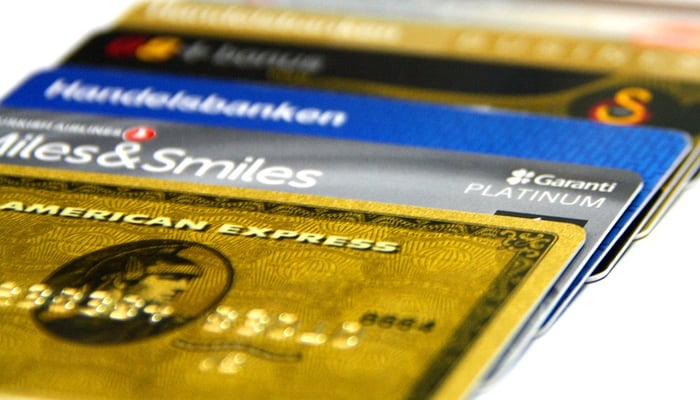 American Express reported $67.9 billion in total loans, a very nice 11% increase year-over-year. In his opening remarks, Campbell seemed particularly pleased by the rate and nature of this growth:

"We continue to steadily grow loans faster than the industry as we capture the particular opportunity we have to grow loans with existing customers while also adding new customers. As we look forward, we believe we have a long runway for growth given our existing customer opportunities while maintaining best-in-class credit performance."

To American Express executive management, the key for loan growth, while keeping its credit risk exposure at exclusive levels, is deeper engagement with its existing customers. Campbell pointed out that the company captures more of its customers' spending share relative to their borrowing share than competitors. American Express believes this creates an opportunity since, as Campbell stated, American Express already knows what product and marketing its customers like and this allows the company to pick and choose among its least risky card holders.

This trend has certainly played out well over recent quarters as half the company's loan growth has come from existing customers. But even as American Express has captured an increasing portion of its card holders' borrowing share, the company still has double of their customers' spending share relative to borrowing. American Express's management believes this means the company still has a "long runway" of growth yet by focusing on this dynamic.

The credit card rewards business is perhaps more competitive than any other time in history. More and more surveys show American consumers consider rewards their top priority when choosing a credit card. It is little wonder, then, that American Express's card member reward expenses increased by about $160 million, or 9%, to $1.9 billion. Helping offset this rising expense, however, was the 8% increase in card fees. While not totally offsetting the rising rewards expenses, it certainly helped take out some of the bite.

The cost of card member services rose 24%, primarily driven by the enhanced rewards in its U.S. Platinum products and the Delta Air Lines' co-brand portfolio. User engagement has increased as American Express has improved airport lounge access and benefits and introduced new benefits like Uber credits. Campbell also made it a point to note that, while the new benefits have already been introduced, existing Platinum account holders will not have to pay the increased fees for these services until this September. Later in the conference call, Campbell stated:

"... the value enhancements we did with Platinum were significant. They're being very well received by customers and driving just the kind of increased engagement and increased new Card Member acquisition that we wanted, but we will continue to follow the competitive environment and continue to make sure that we offer great value propositions relative to what others put in the market, always mindful of the fact that we have some very unique and differentiated assets to offer and we're always going to focus on trying to leverage those as opposed to the things that are perhaps most easily replicated."

As previously stated, even though American Express shares are already up by double digits while beating the market this year, this doesn't mean the company's comeback is over. If it can continue to grow loans while maintaining world class credit performance and offer rewards that differentiate itself from the competition, the company's out-performance to the overall market could well continue. This is especially true now that its Costco relationship is truly behind it.