Please ensure Javascript is enabled for purposes of website accessibility
Log In Help Join The Motley Fool
Free Article Join Over 1 Million Premium Members And Get More In-Depth Stock Guidance and Research
By Brian Feroldi - Jul 28, 2017 at 8:03AM

Abiomed pumped out another quarter of double-digit growth in both sales and profits.

Abiomed (ABMD -1.22%), a medical-device company focused on minimally invasive heart pumps, reported its fiscal first-quarter earnings on Thursday, July 27. The company's results proved yet again that healthcare providers from around the world are warming up to the idea of using the company's Impella family of heart pumps during surgery.

Let's dissect the company's fiscal first-quarter results to learn more about how it performed during the period. 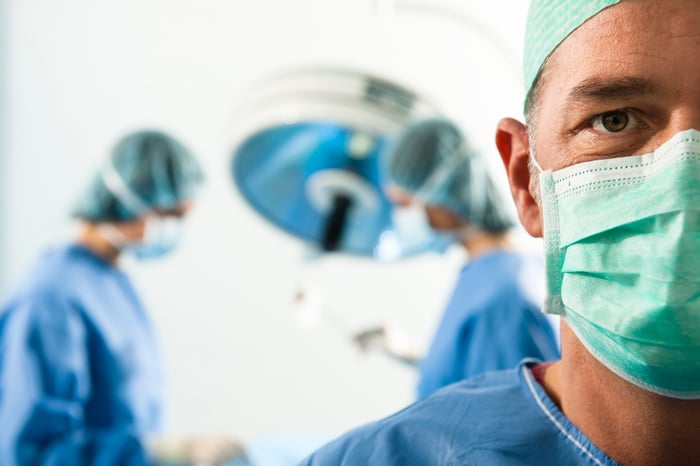 Abiomed's CEO Michael Minogue expressed his enthusiasm for the company's strong start to the fiscal year, and also shared some exciting news with investors related to international reimbursement. "We have been notified by MHLW of Japanese reimbursement for Impella beginning in September allowing our introduction into the world's second largest medical device market," he said, referring to Japan's Ministry of Health, Labour and Welfare.

Specifically, the company stated that it has received reimbursement approval in Japan for its Impella 2.5 and 5.0 heart pumps. The company estimates that its reimbursement rate will be $24,000, which is similar to its reimbursement rates in the U.S. Abiomed expects to treat its first Japanese patient in September, and continues to expect that Impella will be available in 10 Japanese hospitals by March 2018.

The upbeat start to the year allowed management to slightly tweak its fiscal-year 2018 guidance. The company now sees full-year revenue landing between $560 million and $575 million; this represents a $5 million increase at the bottom end from its prior guidance range. GAAP operating margins are still expected to land between 22% and 24%.

In spite of topping expectations and raising guidance, Abiomed's shares fell by just over 2% in early-afternoon trading following this report. Since the company's stock has gained 25% since the start of the year, a slight pullback in the share price shouldn't be all that surprising.

Short-term price movements aside, Abiomed continues to prove that its Impella family of products is gaining traction in both the U.S. and international markets. With Japanese reimbursement now secured, the company looks well positioned to ramp up sales in the second-largest healthcare market in the world. These factors should provide Abiomed's shareholders with reasons to believe that its future remains bright.