Las Vegas Sands (NYSE:LVS) reported another big quarter this week, dominated by the company's resorts in Asia. It's not a surprise the company grew, given Macau's gambling revenue growth and the opening of The Parisian last fall. What this quarter gave us a look at is where growth is concentrated and how the company's resorts are holding up against increased competition.

Luck is always a factor in the gambling industry as well. So results should be compared on an apples-to-apples basis against a year ago and what the rest of the market is doing. 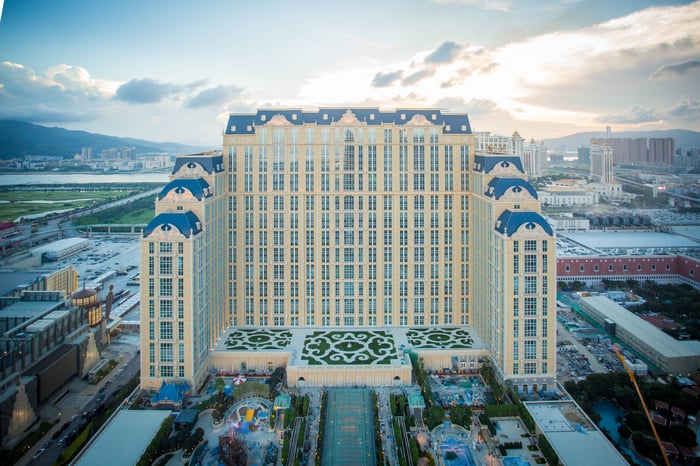 Where the money is in Macau

Overall, Macau revenue was up 23% to $1.82 billion, and adjusted EBITDA jumped 23% to $600 million. This showing compares with a 21.9% jump in Macau's gambling revenue, but remember that Las Vegas Sands has one more resort this year than it had a year ago -- The Parisian.

Here's a look at the gambling volume trends for Las Vegas Sands' resorts in operation for over a year:

These results compare with a 35.3% jump in VIP play at Wynn Macau, Wynn Resorts' (NASDAQ:WYNN) Macau peninsula property, to $16.02 billion, although mass-market volume dropped 9% to $1.07 billion. And Wynn Palace generated another $11.6 billion in VIP volume and $729 million in mass-market play.

The only reason Las Vegas Sands kept up with growth in the Macau gambling market is that it opened The Parisian last fall. Without that, it would have lost a lot of market share, primarily to Wynn Resorts. And with MGM Resorts (NYSE:MGM) and SJM Holdings opening properties in the next couple of years, it's likely there will be even more pressure on the company's market share.

Marina Bay Sands is still the king of gambling

The most important resort in Las Vegas Sands' portfolio is still Marina Bay Sands. And it's still performing incredibly well. Revenue jumped 17.7% to $836 million, and adjusted EBITDA was up 37.8% to $492 million, although both were helped by incredibly good luck.

VIP volume and mass-market volume were up 29.2% and down 2.7% respectively, which is a better indication of how the resort is doing. And occupancy of 94.3% with an average daily room rate of $397 shows just how in demand this property is.

Las Vegas Sands generated $1.21 billion in adjusted EBITDA, which is more than enough to pay its dividend of $0.73 per share. And investors owning the stock today should look at this as a dividend stock rather than a growth stock, given that there aren't any new resort developments on the horizon.

Investors should expect that gambling revenue in Macau probably won't keep up with the market as a whole as MGM and SJM open their properties. But Las Vegas Sands should still hold a profitable position in the mass market with its properties in the core of the Cotai Strip. And with Marina Bay Sands churning out well over $1 billion in cash flow every year, this is a great dividend stock to own for the long term.