Please ensure Javascript is enabled for purposes of website accessibility
Log In Help Join The Motley Fool
Free Article Join Over 1 Million Premium Members And Get More In-Depth Stock Guidance and Research
By Daniel B. Kline - Updated Jul 31, 2017 at 2:50PM

The pizza chain has worked on its technology as much as, if not more than, its menu.

On a survey of America's best pizza chains done by Eater.com earlier this year, Domino's (DPZ -0.40%) came in at 32 out of 35. While it makes sense that the pizza chain placed below regional favorites like top-ranked Pizza Inn, which is mostly in the South, it also came in after national competitors Little Caesars (20), Sbarro (23), Papa John's (NASDAQ: PZZA) (28), and even Yum! Brands' (NYSE: YUM) Pizza Hut (30).

But the chain has delivered 25 consecutive quarters of domestic same-store sales growth, positing a 9.5% increase in the most recent quarter. On the international side the company has grown same-store sales for an astounding 94 straight quarters. In addition, the chain keeps getting bigger, having added 1,281 net new stores over the past four quarters. Given these data points, it seems people don't like Domino's all that much, but they keep eating there.

Even if it falls short in flavor, where Domino's has managed to beat both its national rivals and local favorites is convenience. The company has pioneered technology that makes it very easy to get your order, and in many eating situations, convenience trumps quality. 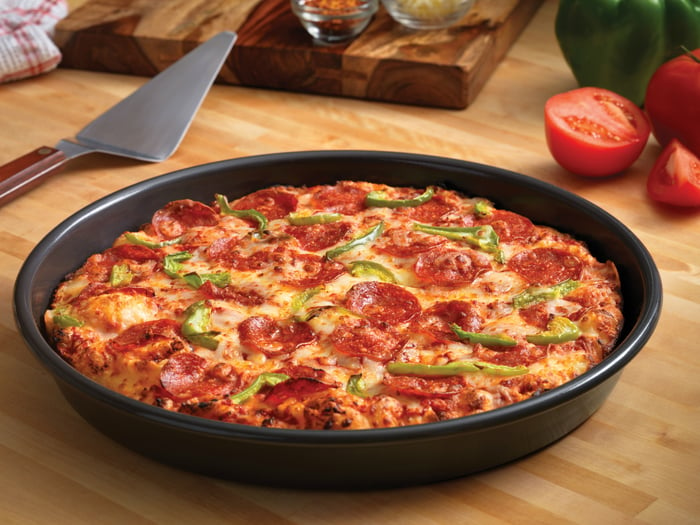 Technology is as important as pizza for Domino's. Image source: Domino's.

How has Domino's grown?

Convenience has always been a core part of the Domino's offering. The company first built its reputation on delivering in under half an hour. That promotion came at a time when delivery in itself was rare, and fast delivery was almost non-existent.

In recent years, Domino's has been at the forefront of app-based restaurant technology. The chain has not only made it so customers can order with minimal clicks, but it was also among the first to allow for mobile payment. In addition, the Domino's Order Tracker makes it so customers can follow the progress of their meal, knowing pretty much exactly when it will arrive.

CEO J. Patrick Doyle talked about the company's reliance on technology during its second-quarter earnings call last week. He made it clear that digital innovation would remain a core part of his chain's growth strategy.

"Technology continued to be at the forefront during the second quarter for the business as a whole," he said, continuing:

With our strong unmatched lineup of anywhere ordering platforms, we now look to the future of digital with near endless opportunities in-store and within the delivery experience itself to examine and consider, as well as applying data learnings to further enrich an online ordering experience that continually sets the pace for our competitors and peers.

Domino's has grown despite the proliferation of fast-casual pizza brands offering higher-end pies at not-much-higher prices. Blaze Pizza, for example, arguably offers a better product than any of the national fast-food pizza chains, but it demands a different level of commitment. It doesn't offer delivery to your home, saying:

We really hope we deliver on all of your wildest expectations. We just don’t currently deliver outside the store. If you really don’t have time to sit down and stay for a while, for now your best bet is to order online through our website or mobile app.

If you order online, the employees "fast-fire" your pizza when you check in with the cashier.

To order from Domino's, customers can have a standard pre-set order in a single click. They can order via emoji, on various social media platforms, or more realistically, by using a very simple app. In the end, you don't get the best pizza available within a reasonable driving distance of most American homes, but you get a good enough pizza without having to do very much.

That model is no longer unique to Domino's. McDonald's (NYSE: MCD) has built its sales turnaround on improving mobile order and pay while adding delivery as much as, if not more than, it has focused on improving the quality of its food. Few people not dressed as clowns would argue that the Golden Arches offers the best burger available. The company knows that and, like Domino's, has realized that making decent food really easy to get serves a bigger niche than having top-tier food that's less convenient.

When it comes to eating, specifically with delivery, people simply don't want to work that hard. Domino's fully understands that and continues to find ways to remove pain from the ordering process.

That has given the chain an edge over rivals with better pizza. It's one that should continue to work until a rival finds a way to equal its technology while also offering notably better food. That's, of course, a very difficult problem to solve, because creating a pizza that holds up well to delivery generally requires sacrificing some quality.