Please ensure Javascript is enabled for purposes of website accessibility
Log In Help Join The Motley Fool
Free Article Join Over 1 Million Premium Members And Get More In-Depth Stock Guidance and Research
By Rich Smith - Aug 1, 2017 at 11:17AM

Currency fluctuations and a transformative sale make this stock an opportunity.

National Grid (NGG -1.52%) stock is in a rut. Down 20% over the past year, as the S&P 500 has surged ahead 14%, National Grid is underperforming the broader market by a whopping 34 percentage points. And yet, German investment banker Berenberg sees opportunity in National Grid's weakness. These shares, says Berenberg, have fallen too far, and Berenberg believes they should be bought. 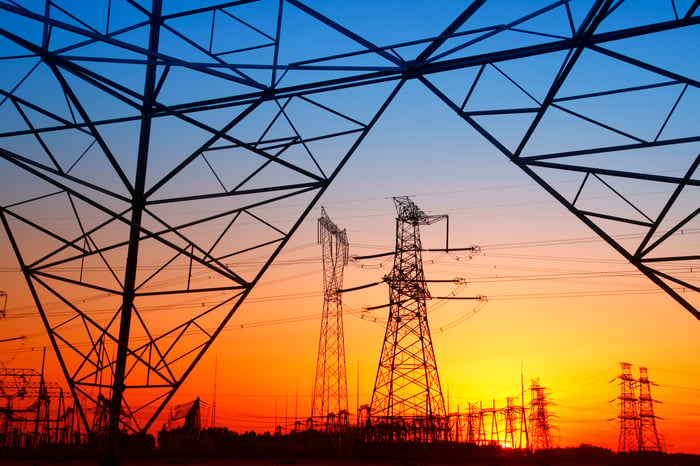 Let's start with the obvious: National Grid today isn't entirely the same company that it was a year ago. In December of last year, the U.S.-U.K. electricity and gas utility sold a 61% stake in its U.K. gas distribution business to a consortium led by Australian investment bank Macquarie.

This sale, valued at $17.8 billion, yielded a $7.5 billion profit for National Grid. Shareholders were further treated to a $5.42-per-share special dividend from the proceeds, and will benefit further as National Grid undertakes to use cash from the sale to buy back $1 billion worth of its own shares (reducing the share count, and boosting earnings among the shares that remain).

On the downside, the subsidiary in question has been generating sales in the $1.4 billion to $1.7 billion range annually over the past five years, and at operating profit margins approaching 50%. Much of that revenue, and those profits, will no longer benefit National Grid. 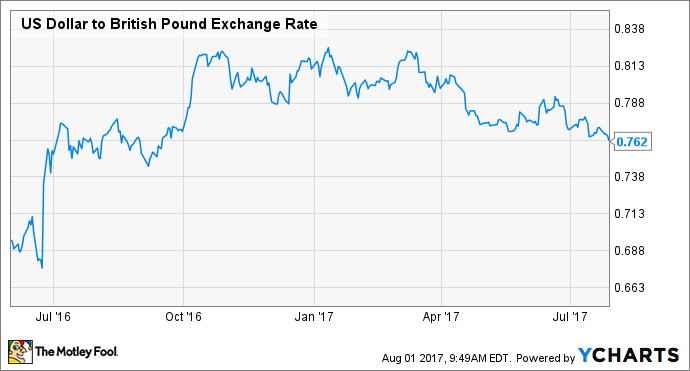 Britain's national currency, the Great Britain Pound (GBP) has been swinging wildly in value since the country announced its exit from the European Union last year. Prior to Brexit, 1 GBP bought $1.49, but by the time the currency hit its nadir in January of this year, the pound sterling had lost nearly 20% of its value, and 1 GBP bought only $1.20.

By the start of this week, the pound had recovered about half its lost value, and was trading back again at an exchange rate of 1 GBP to $1.32. But even so, that means that every pound of profit that National Grid earns in the U.K. today translates into 11.5% less profit for National Grid shareholders in the U.S. than the same pound generated as recently as last summer.

But here's the thing: Even in the best of times, foreign exchange rates fluctuate. From late 2007 to early 2009 -- a period that encompassed the Financial Crisis, but that came long before Brexit, the dollar gained more than 50% in value against the pound.

Brexit may make for more turbulence in the GBP:USD exchange rate, but it isn't exactly a new problem. And as for National Grid's sale of a majority stake in its U.K. gas distribution business, yes, it was a big deal. But National Grid didn't give up that stake for nothing. It got a mountain of cash in return.

In any case, the business in question accounts for less than 8% of National Grid's annual revenue. Although a big deal, as StreetInsider.com reports (requires subscription), Berenberg believes that "fundamental[ly] nothing has changed." National Grid has a slightly smaller business after the sale -- but a whole lot more cash to play with.

So what's the upshot of all the above? Berenberg believes that National Grid stock has been punished too severely for changes that are not really "fundamental" to its business. And this business, according to analysts who follow National Grid stock, is still pretty good.

Post-divestiture, the consensus among analysts polled by S&P Global Market Intelligence is that National Grid will probably earn about $2.8 billion in net profit next year. Weighed against the stock's $42.3 billion market capitalization, that works out to a forward price-to-earnings ratio of 15.1 -- which doesn't seem terribly expensive on its face.

In return for paying this price (says S&P Global), investors can look forward to steady dividends yielding 5.2% and earnings growing at about 3% per year. (Or more -- National Grid is targeting 5% to 7% growth in regulated assets alone. With rate hikes, profits might grow even more than that.)

Between the dividend and the potential for stronger-than-expected earnings growth, I'd say that while National Grid isn't an obvious bargain, it is at least a fairly priced stock.