Revenue growth is one of the most important catalysts for stock performance. The top-line figure may offers the best indication of a business's direction and future prospects, as every successful company needs to deliver sales growth. Profits may be considered the more important figure, but earnings per share can be obfuscated by cost-cutting, share buybacks, and adjustments. Revenue, on the other hand, is almost always a straightforward number, and the market has shown -- as with stocks like Amazon.com -- that strong revenue growth is more than enough to make up for a lack of profits.

With that in mind, let's take a look at three stocks whose sales could double this year. 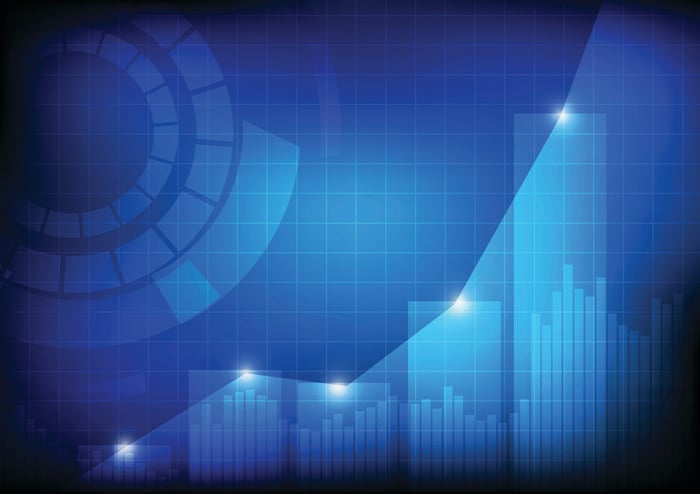 Snapchat-parent Snap Inc (NYSE:SNAP) has gotten a lot of attention this year, but much of it has been negative. The year's most anticipated IPO scored a market cap of more than $20 billion in its debut, and the stock initially jumped out of the gate. However, it's been on a steady descent since its first public earnings report in May. The stock is now down more than 20% from its IPO price of $17.

However, there's no questioning that Snap has posted blockbuster revenue growth in its short history, which was one of biggest reasons for its sky-high valuation to begin with. In its first-quarter earnings report, revenue surged 286% to $149.6 million as the company has begun to monetize Snapchat, its social media and messaging platform.

Snap's revenue growth is likely to slow over the coming quarters as it grows off of a larger base. It posted $404.5 million in revenue last year, and analysts see it reaching $970 million this year, a jump of 140%. However, with Instagram stealing much of what makes Snapchat unique, its lack of profits, and a still-lofty valuation, revenue growth alone does not make the stock a smart bet.

One of the most talked-about plays on the fracking/natural gas boom, Cheniere Energy's (NYSEMKT:LNG) revenue began surging when it opened its first liquid natural gas export terminal in Louisiana last year. That caused revenue to explode from $69 million in the first quarter a year ago to $1.21 billion, growth of a whopping 1,600%.

Like Snap, Cheniere's revenue growth is expected to moderate over the rest of the year as comparisons get more difficult, but analysts still see the top line more than tripling this year, projecting growth of 238%. Cheniere's unique situation -- bringing a plant on line that was long under construction -- means investors shouldn't expect that kind of growth to continue into the future, but the company has several more LNG trains that are scheduled to come on line over the coming years. Management has forecast an EBITDA of $3.8-$4.1 billion in the early 2020s, indicating strong growth from $1.4 billion in adjusted EBITDA it expects this year.

Cheniere's stock has been volatile in recent years, but its unique position as an LNG exporter and record of crushing analyst estimates in its last two quarterly reports bodes well for the company. With a current market cap of about $10 billion, the stock should at least double over the coming years if it can reach the above EBITDA goal.

Shopify's (NYSE:SHOP) revenue has surged since it made its public debut in 2015, hovering close to 100% each quarter. That rate is expected to dip modestly as the law of large numbers dictates, but the e-commerce management specialist still deserves an honorable mention for its consistency and future prospects.

Shopify's revenue jumped 90% last year, which slowed to 75% in the first quarter of this year; however, Shopify's increasingly strong position in e-commerce management software should ensure a long tail to that growth. The company has made one-time rivals like Amazon.com and EBay into partners, a sign that the company is on its way to becoming the dominant player in a fast-growing market with as much potential as e-commerce.

Catering to small and medium-sized businesses, Shopify has gained more than 400,000 merchants, and with more than 10 million merchants in the e-commerce market, Shopify has plenty of room to add more.

Management is calling for $615 million to $630 million in revenue this year, an increase of 60% at the midpoint of its guidance. But the company has a solid track record of beating its own revenue estimates, so there's good reason to think that's a conservative forecast.

As the stock has more than tripled since the IPO, Shopify is one of the best examples of how revenue growth can propel a stock higher. If revenue continues to surge, the stock should follow suit.