Now that the 2010s are over, we're going to look at the decade's 10 best performing stocks.

Why? Such a review could help investors with their stock picking. Lists of past huge winners are often great places to look for future winners if you subscribe to the theory that "winners often keep winning." Moreover, such a review might spark some insight as to what makes for a big long-term winner. 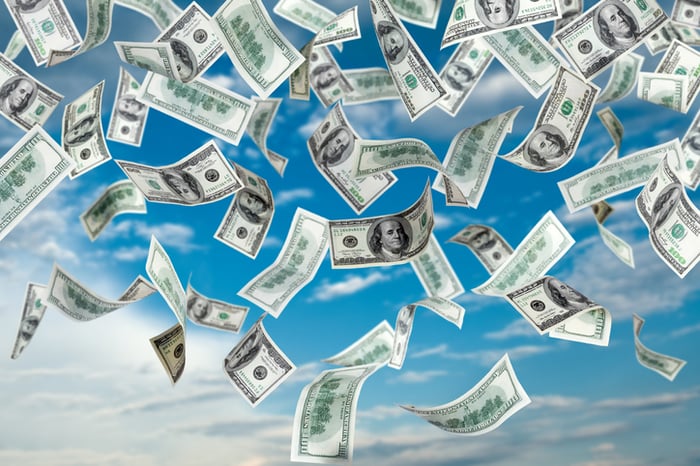 The stocks are listed by descending order of their return over the just-ended decade. (To avoid listing stocks that were quite tiny and obscure 10 years ago, only stocks that ended the decade with market caps of at least $10 billion, meaning they're "large caps," are on the list.)

7 of the 10 companies are profitable

If singer Meat Loaf is right that "two out of three ain't bad," then the profitability profile of our group is slightly better than "ain't bad." Seven of the 10 are profitable on a trailing-12-month basis, while Exact Sciences (No. 4), DexCom (No. 5), and Cheniere Energy (No. 6) are not.

There are probably just two companies among the decade's 10 best performers that the vast majority of Americans would know -- Netflix and Domino's Pizza -- and they top our list. This is probably not entirely coincidental. There's a reason these consumer-focused companies are so well known: They sell products or services that are extremely popular. That strong demand for their offerings has driven their financial performances, which in turn, has powered their stocks' performances.

While Netflix and Domino's are in entirely different businesses, they have a key commonality that's at the core of their immense success: They're both pioneers. Netflix's pioneering of video streaming disrupted the massive cable TV and movie theater industries and largely put video rental stores out of business. Investors should monitor competition, which continues to heat up. Notably, Disney launched a broad streaming offering in November.

Domino's pioneered pizza delivery on a large scale. It offered a key service feature that set it apart from the largely mom-and-pop pizza delivery competition: guaranteed delivery in less than 30 minutes. Its stores are also open considerably later than most independent pizza shops, so it can be the only option for many consumers who get a late-night hankering for pizza delivery.

The 2 financial sector stocks -- one is a Warren Buffett stock

MarketAxess (No. 3) and Fair Isaac (No. 9) could be described as financial-tech companies, though one also might consider Fair Isaac a tech company. MarketAxess operates the leading electronic bond-trading platform for institutional investors and dealers. It's been benefiting from the shift in bond trading to online platforms.

Fair Isaac describes itself as a "leading analytics software company." While the company might not be a household name, its flagship product -- the FICO credit score -- is quite well known. Fair Isaac also offers a wide range of other products and services for various industries aimed at helping management run their businesses better. Legendary investor Warren Buffett owns the stock in his Berkshire Hathaway portfolio, which is certainly a good endorsement.

With stocks ranking No. 4 (Exact Sciences) and No. 5 (DexCom), the healthcare sector makes a healthy showing on the decade's list of stock champs. While both these stocks are unprofitable on a trailing-12-month basis, DexCom recently achieved solid quarterly profitability.

In 2014, Exact Sciences launched its initial product, Cologuard, the first stool DNA test for colorectal cancer.  It aims to build the "world's leading advanced cancer diagnostics company," according to CEO Kevin Conroy. The company made a notable step toward that goal in November when it closed on its $2.8 billion acquisition of Genomic Health, which makes tests for breast, colon, and prostate cancer that use advanced genomic science to optimize cancer treatment decisions.

DexCom makes a continuous glucose monitoring (CGM) system, the G6, for people living with diabetes. G6 has been a big winner for the company, with third-quarter revenue soaring 49% year over year. With the global population getting older and heavier, the incidence of diabetes is on track to continue to increase.

The remaining big winners on our list include one energy stock (No. 6, Cheniere Energy), two industrial stocks (No. 7, TransDigm, and No. 10, United Rentals), and one technology stock (No. 8, Broadcom).

Cheniere Energy is an energy company primarily engaged in liquid natural gas (LNG)-related businesses. It "owns and operates the Sabine Pass LNG receiving terminal and Creole Trail Pipeline located in Louisiana, through [its] general partner ownership interest in and management agreements with Cheniere Energy Partners," according to its website. It has several development projects under way.

TransDigm is a leading global designer and manufacturer of highly engineered aerospace components, systems, and subsystems. It got notably larger last year thanks to its acquisition of Esterline Technologies. A big thing to like about TransDigm is that its operating margin is significantly higher than others in its industry.

United Rentals is the largest equipment rental company in the world with locations across the U.S. and Canada.  Its stock can be expected to be quite cyclical since it largely serves the construction industry. Wall Street expects the company's earnings growth to slow from a 24% average annual rate over the last five years to just 2.2% annually over the next half decade.