It's no secret that retailers are having a tough time this year. As of April, the industry was on pace for more than 8,000 store closings, a new record as competition from e-commerce has led to a declining need for storefronts. Retail stocks have also largely flopped this year, missing out on the broader market rally. 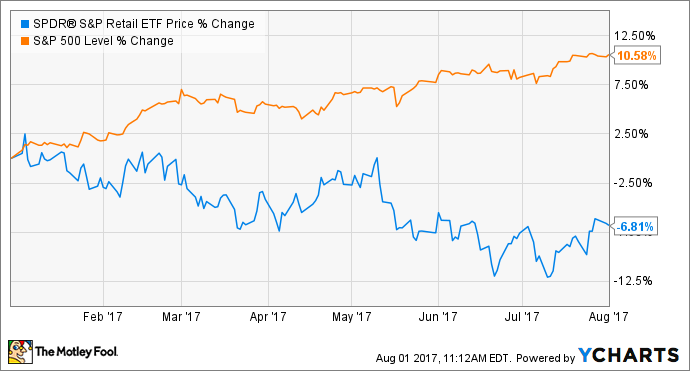 Some sectors, like department stores, have gotten hit much harder. However, the sell-off so far this year has created some opportunities in the industry.

With that in mind, let's look at three retail stocks that could bounce back this year. 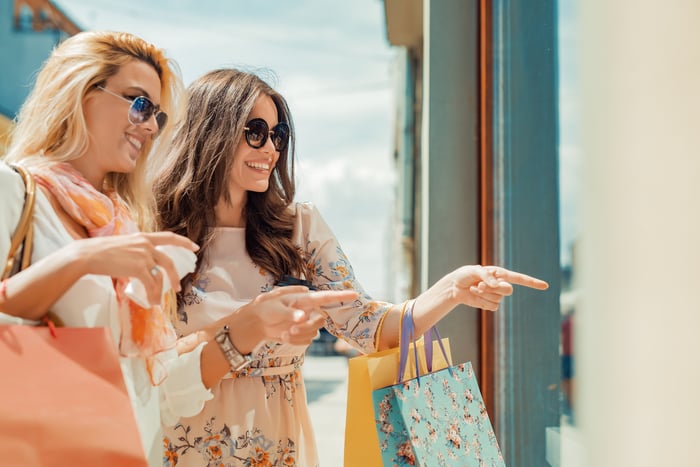 The sneaker retailer may be one of the best bargains in the sector today. Foot Locker (NYSE:FL) shares are down 34% this year, following weak sales growth in its first-quarter report, but that's set up the stock as a value play, as it now trades at a P/E of just 9.6. Foot Locker is also much stronger than similarly valued retail stocks.

In its most recent report, the company still managed to deliver comparable sales growth, at 0.5%, and saw comps jump in the high-single digits in March and April, following a February slump on a tax refund delay. Despite the slow start, the company sees improving performance in the second half of the year, forecasting mid-single-digit comparable sales growth and double-digit EPS growth.

Investors also seemed nervous after Nike, a key supplier, said it would sell directly on Amazon.com, but Nike is moving slowly with that partnership and will continue to depend on Foot Locker for high-profile sneaker releases that draw a crowd. The retailer's 2.7% dividend yield also offers a reward for patient investors. With expectations muted for its August earnings report, the stock could surge if it beats estimates.

The nation's largest traditional supermarket chain got hit buy a double whammy back in June. The stock fell 19% first on a weak earnings report and then the next day dropped another 9%, after Amazon said it would buy Whole Foods Market.

Kroger (NYSE:KR) stock has since begun to crawl out of that hole, a sign the market thinks the stock's oversold. Its first-quarter earnings report was deserving of a sell-off as the company slashed its full-year adjusted EPS date from $2.21-$2.25 to $2.00-$2.05, however, the company is facing much of the same headwinds as the rest of the industry, including food deflation and intense price competition. Comparable sales in the period slipped 0.2%, but the company still grew its market share.

Despite the current headwinds, Kroger is evolving with the industry, becoming an omnichannel company with its ClickList grocery pickup service, and acquisitions of e-commerce businesses such as Vitacost.com and specialty businesses such as ModernHealth.

With its acquisition strategy, Kroger is better positioned to grow without saturating in the market, and the company's size should offer it an advantage over rivals, including European newcomers like Aldi and Lidl. Even the Amazon-Whole Foods tie-up should not present a significant threat as Kroger has six times as many locations as Whole Foods. At a P/E of 12 based on this year's earnings, the stock offers a 2.1% dividend yield, solid value and upside potential. It's a stronger business than its recent woes indicate.

Department stores have suffered as much as any other segment during the "retail apocalypse," and J.C. Penney (OTC:JCPN.Q) is no exception, as the stock was down nearly 50% following its first-quarter earnings report.

However, the stock has begun to recover, as the worst seems to be over for J.C. Penney and its peers. While a comparable-sales drop of 3.5% in the first quarter was disconcerting, its performance in the second half of the year should improve. The company is calling for flat comparable sales for the year, or about a 1% increase for the remaining three quarters, and the retailer's decision earlier in the year to close 130 to 140 of its weakest should help the bottom line.

Penney has also been more proactive at enhancing its business. The company recently announced an exclusive fashion brand, "Project Runway," and is opening up toy shops in all of its stores. It also continues to expand traffic drivers such as Sephora and InStyle Hair Salons.

The headwinds may be apparent, but the value is still there as the stock is trading around a P/E of 10, based on its earnings guidance, though that may be suspect. The company is the riskiest of the three here, but the bar is low enough for it to make a strong recovery as the sell-off this year seems exaggerated.

3 Retail Stocks That Could Bounce Back in the Second Half of the Year @themotleyfool #stocks $KR $JCPN.Q $FL $AMZN $WFM $NKE Next Article
Current