When Google, now part of Alphabet (NASDAQ:GOOG) (NASDAQ:GOOGL) went public in 2004, it was a well-known search company, but it wasn't the internet behemoth we know today. It wasn't until years later that it began to dominate cellphones, online video, and the fabric of advertising as we know it.

We asked three of our investors to name a company they think looks a lot like Google, with potentially misunderstood upside potential that investors can profit from. Snap Inc. (NYSE:SNAP), Netflix, Inc. (NASDAQ:NFLX), and Shopify Inc. (NYSE:SHOP) are three stocks that made the list. They may not be the next Google, but they have a better shot than most companies. 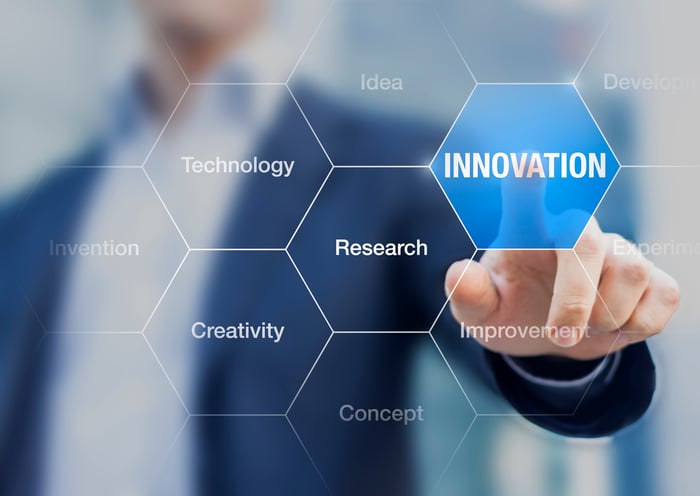 Travis Hoium (Snap): In 2004, Google was a well-known company on the internet, but it was actually smaller than Yahoo! (which is now a subsidiary of Verizon) in terms of revenue, and there was genuine debate about which company was better positioned to capture growth on the internet.

Today, Snap is in a similar position: revered by young users who can't take their eyes off the social network, and genuinely misunderstood by many, including Wall Street. But I think Snap has a much brighter future than the market is pricing in today, and has the potential to branch into new businesses, just as Google did.

Snap also has the opportunity to expand its product to compete with other social-media platforms. It's already added memories to its vanishing-image and video-sharing capabilities, and is moving toward allowing users to edit the videos they share, which would improve quality. Snap Spectacles may not have been the huge hit the company wanted them to be, but with more wearables on the horizon, it's possible the company will make its way onto other imaging platforms in the future, even if that isn't with its own hardware.

Snap is popular and growing, but we don't know what the company will look like in a decade or two. That's not unlike Google. And with its current market cap around $15 billion, I like the upside Snap gives investors willing to bet on the platform.

Jeremy Bowman (Netflix): At its initial public offering in 2004, Google had a market cap of just $23 billion. However, the company held a dominant position in search, and was deservedly one of the most coveted IPOs at the time. Shares quickly surged and have returned nearly 1,800% since then, as the company has grown organically and through acquisitions.

The stock today that I think most resembles Google back then is Netflix. Like Google, Netflix has established a dominant position in a market that's just beginning to take off: video streaming. The company is valued at around $80 billion after posting blockbuster subscriber growth in its latest earnings report, but the stock could still double or triple from here.

That's because video streaming, or "internet TV" as the company likes to call it, is an enormous market, and improvements in technology are only making it bigger. Netflix has just reached 100 million global subscribers, with about 50 million domestically and 50 million abroad, but the company envisions reaching 60 million to 90 million households in the U.S., and many more internationally.

Like Google, the company has established competitive advantages through its brand name and scale. Netflix spends more on content than any competitor in linear TV or streaming, and with its global reach it can leverage its original content to serve its audience of 100 million in nearly every country. Okja, for instance, was critically acclaimed at the Cannes Film Festival and popular in the U.S., and because of its Korean director it scored a lot of sign-ups for Netflix in South Korea.

Netflix is currently posting minimal profits, but the company is targeting an operating margin of 7% this year and it should scale up from there. As profits grow, the stock should continue to move higher.

Demitri Kalogeropoulos (Shopify): E-commerce software specialist Shopify boasts a few attractive qualities that will remind investors of an IPO-era Google. Here's the overarching one: The founder-led company is building a lead position in an industry with massive long-term growth prospects.

The Canada-based business runs a platform that helps merchants connect with their customers online. Its recent business results demonstrate the strength of that business-to-consumer approach. Revenue jumped 75% in the fiscal first quarter. The company handled $4.8 billion of merchandise volume, for an 81% improvement over the prior year, as online sellers flocked to Shopify's flexible multichannel platform. Numbers like these add weight to management's claim that the company is "becoming the de facto platform for sellers."

Like Google in its early days as a public company, Shopify is just scratching the surface on initiatives aimed at monetizing its engaged user base. Its high-margin subscription offerings, including the Shopify Plus plans, are an early hit with larger merchants and have helped push recurring revenue up to 16% of its sales base. As a result, gross profit grew at a faster pace than revenue in the first quarter.

CEO Tobias Lutke and his executive team are aiming to scale up their merchant base as quickly as possible, while also keeping their products' functionality and customer service ahead of the competition. Those are expensive challenges that currently keep the company operating at a loss. Yet shareholders have good reasons to expect solid returns from this strategy if it yields a dominant market-share position in this surging industry.