In general, it can sometimes be hard to know what President Trump is talking about. But when he makes off-the-cuff comments that have implications for investors, we're forced to try to decipher our Tweeter in Chief's words. Last week in an interview with The Wall Street Journal, Trump said that Apple (NASDAQ:AAPL) CEO Tim Cook had "promised" to build "three big plants, beautiful plants." "Big, big, big," Trump added.

It was a bizarre assertion, and one that Apple probably didn't appreciate. Not only because Apple values secrecy, but also because Cook very likely made no such commitment. It seems clear now that one of the plants that Trump was referring to was the factory that Foxconn announced later that week, which was widely expected. The factory will be located in Wisconsin, and the state scored the investment with generous tax incentives. 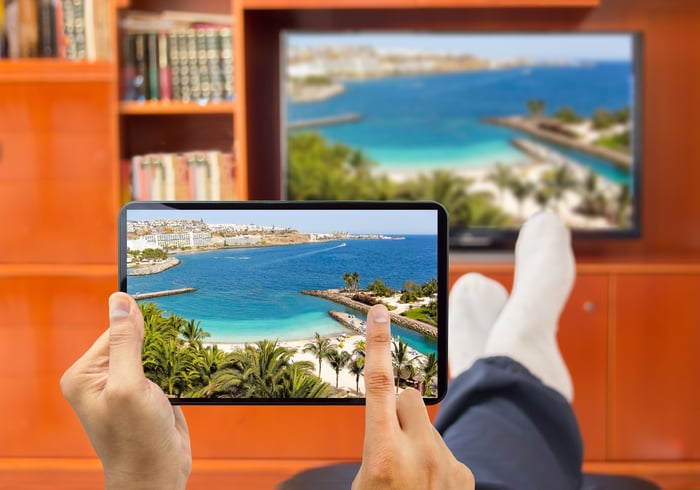 The Foxconn factory is expected to produce displays for a wide range of consumer electronics. Image source: Getty Images.

It will produce large and small flat-panel displays, and is expected to employ approximately 3,000 workers. Foxconn plans to invest $10 billion.

Getting to the root of the question

And then a government question. First of all, the president suggested that you may build three big, beautiful plants. I wonder if you could comment on if that's a possibility, either directly or indirectly.

Cook was prepared (as always), and swiftly dodged the question by changing the subject to focus on the underlying topic (domestic job creation) without providing any specific details about the size or aesthetic qualities of any theoretical Apple manufacturing plant:

Sure. Starting with the U.S. -- let me just take this question from what are we doing to increase jobs, which I think is probably where it's rooted. There's -- we've created 2 million jobs in the U.S. and we're incredibly proud of that. We do view that we have a responsibility in the U.S. to increase economic activity, including increasing jobs because Apple could have only been created here.

His entire response was rather long-winded (and not worth repeating here in full), showing that Cook was expecting the question. The chief executive reiterated his belief that coding should be included in public education curriculums, which can potentially lay the foundation for future jobs for the next generation. Apple purchased $50 billion worth of goods and services from domestic suppliers over the past year, helping spur economic activity. The iPhone maker also committed $1 billion into an advanced manufacturing fund in May, and promptly awarded supplier Corning (NYSE: GLW) with a $200 million investment to nurture innovation in glass manufacturing.

Apple is not Foxconn

And Foxconn is not Apple. Foxconn is an Apple supplier. It seems silly to have to point this out, but it's not clear if Trump understands this distinction. Foxconn is planning on investing $10 billion, and despite Foxconn CEO Terry Gou privately telling Trump off the record that the investment could potentially reach as high as $30 billion, Trump decided instead to announce that potential sum publicly at a press conference.

"He told me off the record -- he thinks he may go $30 billion," Trump said on Tuesday. "But he told me that off the record, so I promised I wouldn't tell anyone."

These figures imply that if Apple were to build three colossal, ravishing manufacturing facilities on its own, it could be looking at $30 billion worth of capital expenditures, far more than the $1 billion that Apple has committed. Apple expects to spend $16 billion in total capital expenditures this fiscal year, the majority of which is outside of the U.S. (product tooling in manufacturing facilities in Asia). If Apple does have further plans to invest in the U.S., there could be hints in the next 10-K (which will be released next quarter) when providing capital expenditure guidance for fiscal 2018.

For now, Cook was able to evade a loaded question after being put into an uncomfortable position by the president of the United States. Well played, Tim.