Apple's (NASDAQ:AAPL) iPad business, which has suffered from a seemingly endless streak of year-over-year unit and revenue declines, performed well during the company's fiscal third quarter.

Apple reported that its iPad unit shipments hit 11.42 million during the quarter , representing a year-over-year boost of 15%. The company also reported iPad revenue growth of 2% year over year -- that's still growth, which is good, but it's less robust than the unit story. 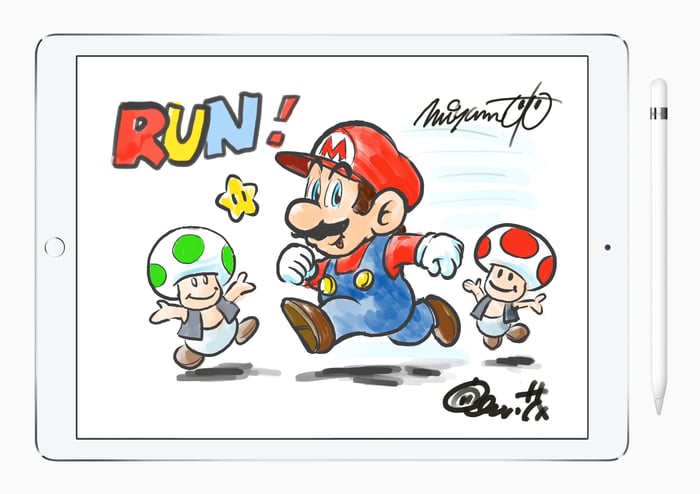 This suggests that Apple's iPad unit growth story was driven primarily by sales of the company's new low-cost 9.7-inch iPad, simply marketed as "iPad," rather than by the company's pricier iPad Pro family of devices.

What does this quarter mean for Apple's iPad business, and what could the future hold for it? Let's take a closer look.

Apple sacrificed some features relative to the now-discontinued iPad Air 2 to hit these price points, including no laminated display and the use of a lower-cost A9 chip versus the A9X. However, the 9.7-inch iPad is, for what it's worth, a high-quality device that seems to deliver a good price-to-capabilities ratio.

Based on Apple's iPad results in the quarter, customers seem to agree.

That Apple enjoyed an iPad unit sales bump in addition to a much-needed stabilization in the iPad revenue base through the introduction of a lower-cost 9.7-inch device seems to suggest the existence some degree of price elasticity in the iPad market that the company wasn't previously exploiting.

Well, it looks as if that problem has been "solved" now.

Apple should also have a relatively easy time delivering annual improvements to its low-cost iPad lineup to try to stimulate upgrade activity, as this product line is essentially made up of older iPhone and iPad components. Component prices tend to decline over time, so technologies that may have been too expensive to include in this year's low-cost iPad should, by next year, be viable for the product.

Moreover, since Apple is recycling components and technologies in the low-cost iPad, the company's research and development expenses associated with bringing this product to market should be reasonably low.

The low end is taken care of; now on to the high end

With the company now properly exploiting its potential at the low end of the iPad market, Apple, and its investors, should now turn their focus on keeping the high end of the iPad business healthy.

The company is guiding to a revenue range of $49 billion to $52 billion, which would, at the midpoint, represent nearly 8% year-over-year revenue growth. Perhaps as part of that growth outlook, Apple is expecting the new iPad Pro models to fuel further growth in its iPad business.