Off-price giant TJX (NYSE:TJX) has been one of the biggest retail success stories of the past decade. It has posted steady comparable-store sales growth, even as many of its rivals in the apparel and home furnishings markets have faltered in the face of rising e-commerce competition.

Nevertheless, TJX stock has fallen more than 15% since hitting an all-time high about a year ago. The company's somewhat disappointing first-quarter results led some analysts to conclude that off-price retailers like TJX and Ross Stores (NASDAQ:ROST) are not really "Amazon-proof" businesses. 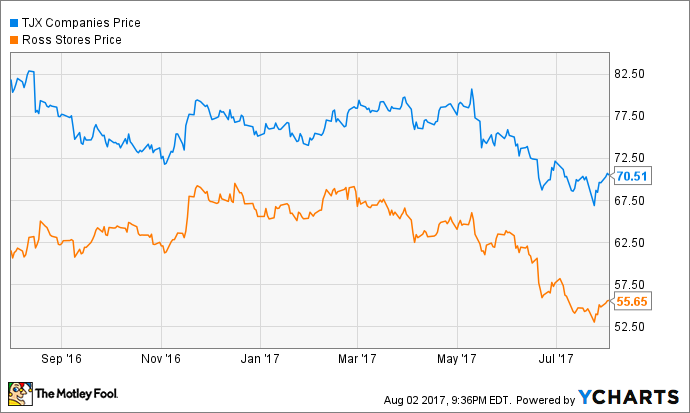 These analysts are probably overreacting to a single subpar quarter, especially considering that TJX faced extremely tough year-over-year comparisons and unfavorable weather during Q1. Moreover, they are completely ignoring how stronger economic growth abroad and a weaker dollar could boost TJX's results outside the U.S. As a result, TJX stock looks like a steal at its recent trading price around $70.

Currency has been a headwind

The strong dollar has been a recurring problem for TJX in the past few years. (This is a big reason why Ross Stores has delivered steadier earnings growth than its larger rival recently.) TJX operates more than 400 stores in Canada and more than 500 stores in Europe -- as well as a handful in Australia -- so exchange rate fluctuations can have a meaningful impact on its results. For the past few years, the impact has generally been negative.

A strong dollar increases the local currency cost of goods for TJX's stores outside the U.S. This can have a huge impact on profitability. For example, the weak Canadian dollar caused TJX Canada's segment margin to decline by 0.5 percentage points in fiscal 2016, even though TJX achieved stellar 12% comp sales growth in Canada that year.

In Europe, where TJX hasn't achieved the same level of sales growth, there has been an even greater impact on profitability. The weakness of the pound and the euro caused the TJX International segment margin to plunge to 5.4% last year, compared to 8.2% two years earlier.

The trends are turning positive

Entering this year, TJX's management expected currency to be a slight earnings headwind, largely because of the sharp depreciation in the British pound that followed the June 2016 Brexit vote. However, the pound has stabilized and is now roughly even with its year-ago level.

Meanwhile, the euro and Canadian dollar have surged against the U.S. dollar in the past few months. As a result, foreign currency could be a meaningful margin tailwind for TJX in the back half of the year. 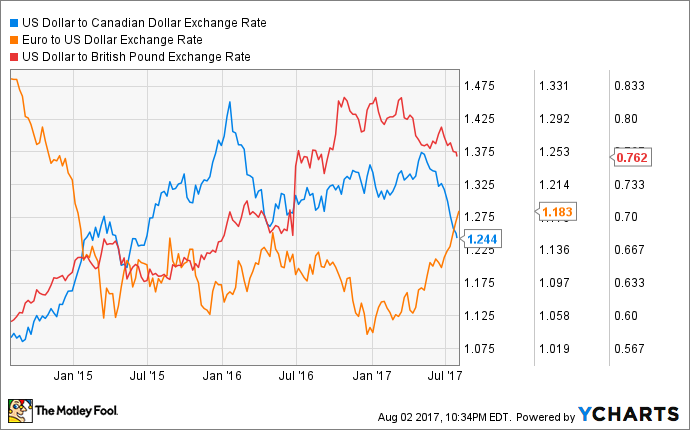 The Canadian and European economies are gaining steam, as well. In short, TJX is in position to boost its already strong profitability in Canada while getting its European operations back on track in the next few quarters. That should drive solid earnings gains, even if growth remains slower in the United States.

No reason to panic about Q1 growth slowdown, either

In the first quarter, comparable-store sales were flat at TJX's T.J. Maxx and Marshalls chains in the U.S., and up 3% at the smaller HomeGoods chain. By contrast, Ross Stores posted a solid 3% comp sales increase during the same period.

Given that TJX reported 5% comp sales growth in the U.S. last year -- slightly higher than Ross Stores' 4% gain -- investors shouldn't worry too much about the divergence in their first-quarter results. TJX has a strong presence in the Northeast and Midwest, which had unfavorable weather for most of the first quarter, negatively impacting T.J. Maxx and Marshalls. Ross Stores was insulated from this trend because it is still building out its presence in the Midwest and doesn't operate in the Northeast at all.