Only a few days after Ford Motor Company (NYSE:F) failed to impress investors and analysts with its tax-break-fueled second-quarter beat, investors were looking for a silver lining in the automaker's July sales results but bracing for another seemingly inevitable decline -- Ford's sales have declined every month in 2017 so far except for May. And while total sales did in fact decline 7.5%, the silver lining is that it's not as bad as it seems.

Ford's total July sales tallied only 200,212 units. But the two segments that make up total sales had wildly different results. Ford's retail sales were down a modest 1% to 159,492 units, while its fleet segment sales, which are generally less lucrative, plunged 26.4% to 40,720. That suggests that Ford's sales mix was healthier. Also, keep in mind that this July had one fewer selling day than in the prior year.

For comparison, General Motors' (NYSE:GM) retail sales declined a more drastic 14.4% during July, while its fleet sales -- which, to be fair, are at a much lower percentage of total sales than Ford's this year -- declined 2.8%. Furthermore, Ford's retail market share improved over the three-month period ended in July, which is positive considering the industry's cycle is at peak sales.

Generally speaking, a total decline driven by retail sales weakness rather than fleet sales is more detrimental to profitability, and that's one reason Ford had a better month than it appears from its sales total. But there were more positive takeaways in the quarter. One vehicle that never seems to let Ford investors down is the company's bread-and-butter F-Series. It has consistently grown its U.S. sales and remains critical to Ford's profitability. 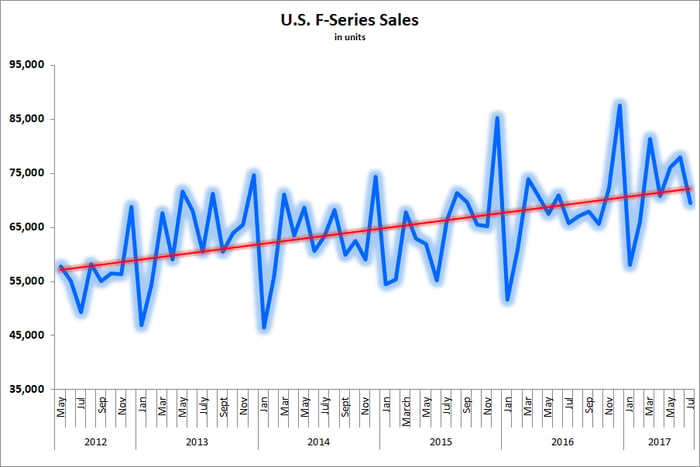 The full-size truck line recorded a 5.8% increase in sales to 69,467 units sold in July. Super Duty represented 53% of the F-Series sales mix -- a rule of thumb is that the bigger the truck, the bigger the price tag -- which helped drive the line's overall average transaction prices (ATPs) $2,500 higher compared to the prior year, to $45,000 per vehicle.

Ford's SUV segment also posted a strong July with 65,558 units, a 2.9% increase compared to the prior year and a record year-to-date sales level through July. The Explorer helped drive that result with a near 13% increase to 18,763 units, and the Escape posted a 5.5% gain to 27,716 units. Furthermore, 30% of the Escape's retail sales were of more-profitable high-series Titanium models.

"Customers across the country drove retail gains of Ford brand SUVs in July. SUV retail sales were up 9.1 percent nationally, with growth in every region of the country. High-series SUVs were in strong demand with customers[,] representing nearly 30 percent of retail sales." said Mark LaNeve, Ford vice president, U.S. Marketing, Sales and Service, in a press release.

One thing for investors to keep an eye on each month is inventory levels. Ford's gross stock, which includes vehicles in transit, ended July at 77 days' supply. That's a little higher than the historical industry norm, but Ford's inventory also favors trucks, which is a good thing at the moment. It's also a much more defensible level than General Motors' 104 days' supply, even if part of that is due to the company's preparation for summer plant shut downs.

When all was said and done, U.S. industry sales declined 6.9% during July, accelerating from a 2.9% year-to-date decline. Investors have to accept these declines as a natural part of the industry cycle, but the good news for Ford investors is that its July sales decline actually wasn't as bad as it appeared thanks to rising SUV and truck sales, strong pricing, and relatively stable retail sales.