Revenue is starting to grow again at Titan International Inc (NYSE:TWI), but the expected improvement in the bottom line is behind schedule. And as with any recovery, investors are having a hard time figuring out when to expect sales to grow and how that will translate to the bottom line.

There were some positive and some negative trends in the second-quarter results released on Thursday. Here are the highlights to keep in mind. 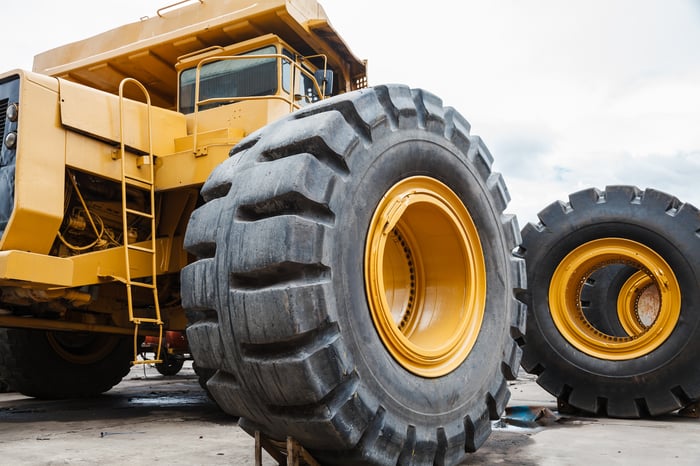 What happened with Titan International Inc this quarter?

On the surface, it looks concerning that revenue was up but net income was down. But there were fairly easy explanations for this dynamic.

There were some positive trends, like winning "100% of the global forestry business with a major, global OEM [original equipment manufacturer]" for the undercarriage component subsidiary ITM. Equipment manufacturer New Holland also began offering the company's low sidewall (LSW) technology tractor setup recently, which will bring new sales to Titan; management noted that "[a] study demonstrated that LSWs deliver higher yields" for customers. If progress like this continues with new products, it should help drive revenue higher over the next few years.

A lot of the headwinds that Titan International is facing should be short-term as well, like the $5.3 million foreign exchange loss that will be negated over time because loans at foreign subsidiaries are "expected to be settled in cash at some point in the future." And management noted that higher raw material costs are being transferred to customers in the form of higher prices and that margins should increase later in the year as a result.

The growing loss was a bit of a surprise in the second quarter, but the short-term raw material and currency trends shouldn't be a big negative for long-term results. On the revenue side, it looks like the recovery might not be as quick as management may have expected, but it's starting to take hold, and that's a positive for Titan International's stock long term.