The ATM operator beat analyst estimates, but it expects earnings to decline this year.

Shares of ATM operator Cardtronics (CATM) slumped on Thursday despite a positive second-quarter report. Cardtronics beat analyst estimates for both revenue and earnings, but it wasn't enough to keep the stock from falling 12.5% by 3:15 PM.

Cardtronics reported second-quarter revenue $385.1 million, up 19% year over year and about $6 million higher than the average analyst estimate. The growth was driven by the acquisitions of DCPayments and Spark, both of which were completed in January. 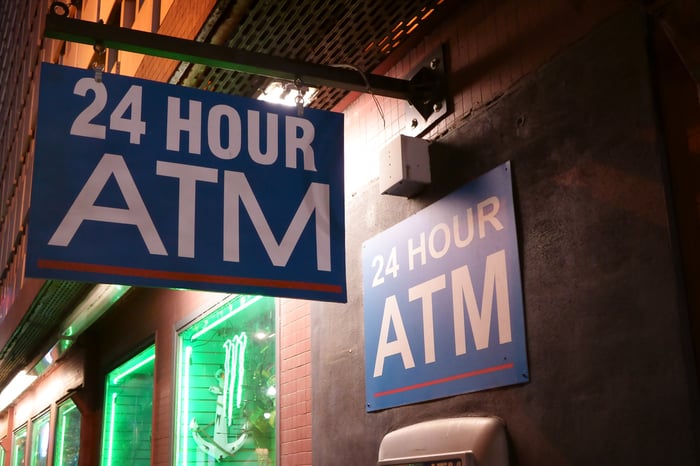 Non-GAAP EPS came in at $0.76, down from $0.80 in the prior-year period but $0.04 better than analysts expected. The decline was driven by higher interest and depreciation expense stemming from the two acquisitions completed this year.

"Our second quarter was marked by operational focus as we made significant progress on several key fronts, including the integration of DCPayments, software and EMV upgrades on a significant portion of our Company-owned U.S. ATM fleet, and the continued execution of our cost efficiency initiative. We made significant strides in the quarter to position ourselves for steady execution of the core business and focused pursuit of growth opportunities with financial institutions."

The earnings decline during the second quarter, along with guidance calling for an earnings decline in 2017, appears to be the driving force behind the slumping stock price. While acquisitions are boosting the top line for Cardtronics, the bottom line is turning out to be a different story.

Why Shares of Cardtronics Sank Today