Shares of GrubHub Inc. (NYSE:GRUB) popped today after the company reported second-quarter earnings after the close Thursday and then announced that it had agreed to buy delivery app Eat24 from Yelp Inc. (NYSE:YELP)

The stock closed up 9.2%, while Yelp shares also surged on the news. 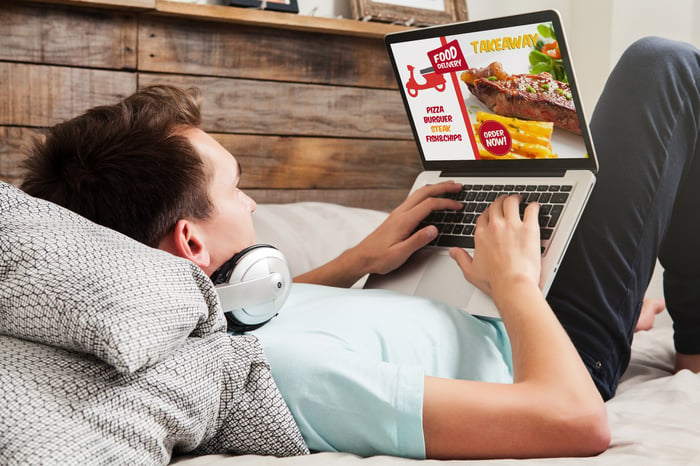 Though it came on the same day as the quarterly report, it appeared to be the pending addition of Eat24 to GrubHub's industry-leading portfolio of delivery apps -- which include Seamless, MenuPages and AllBites -- that drove the stock higher. GrubHub said it would pay $287.5 million for Eat24, using a combination of cash on hand and debt, and it would enter into a long-term strategic partnership with Yelp. The recommendation engine will integrate online ordering from all of GrubHub's restaurants onto its platform.

As for its earnings report, the company delivered 32% revenue growth to $158.8 million, while daily average orders were up 16% and active diners increased 25%. That revenue figure topped analysts' consensus expectation of $158.1 million. Adjusted earnings per share increased from $0.23 a year ago to $0.26, meeting estimates.

In addition to its deal with Yelp, GrubHub inked a similar partnership with Groupon earlier in the week to bring food delivery to that platform. The  company is continuing its pattern of aggressive expansion through acquisitions: In the last two months alone, it bought delivery apps Foodler and OrderUp. The Eat24 deal gives it 75,000 restaurants under its umbrella,  making the company the dominant third-party delivery service. It currently has 23% of the restaurant delivery market, behind only Domino's Pizza, which has 24%.

Excluding those acquisitions, the company forecast full-year revenue of $642 million to $662 million, which would amount to about 32% growth. With its latest slew of acquisitions to propel it, GrubHub's strong growth should continue.