2017 has been a good year for owners of Illumina (NASDAQ:ILMN) stock. Shares of the genetic testing equipment maker are up nearly 50% since the year began, and received a healthy 14% bump in stock price after reporting fiscal second-quarter earnings last week.

But one analyst thinks Illumina could go up even more. Here are three things you need to know about that. 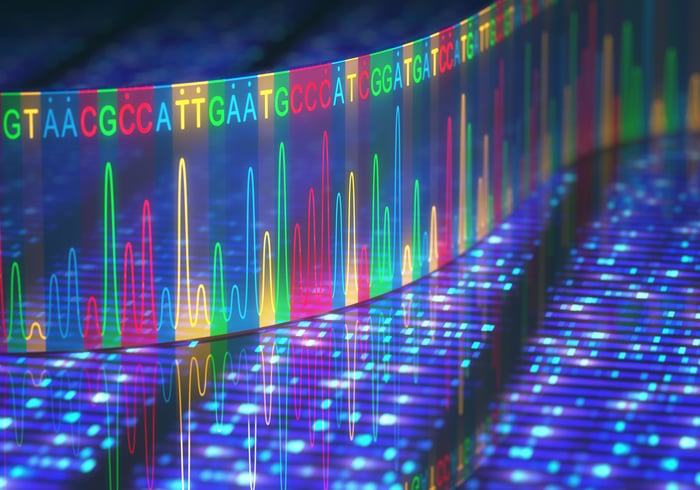 Illumina blew away expectations last week, reporting 10% sales growth to more than $660 million total for Q2. Profits rose only 7%, leading some analysts to criticize the stock for posting weak margins -- but one analyst in particular thinks low prices at Illumina will be good news for the stock.

And Illumina did beat expectations, earning $0.82 per share when analysts had forecast only $0.69, pro forma.

2. What Canaccord Genuity said about what Illumina said

Reviewing Illumina's results, Canaccord came to the conclusion that Illumina stock is a buy -- and priced at $194 and change today, could rise as high as $215 over the next year, delivering to shareholders a more-than-10% profit. Why?

As explained in a note on StreetInsider.com (requires subscription) this morning, "as ILMN drops sequencing costs, new demand rises." The analyst noted that "the biggest surprise to us has been orders from customers new-to-sequencing." Turns out customers like the idea of low prices, and as Illumina reduces the cost of its services, more customers are finding they can afford to buy genetic sequencing technology -- and are finding more uses for it.

Canaccord believes Illumina's business will benefit from "major waves of cancer [research] growth, including both the development of companion diagnostics for targeted IO therapies, to massive oncology studies (GRAIL and Guardant Health)." At the same time, existing customers of Illumina's entry-level benchtop gene sequencers are starting to upgrade to more expensive and more capable NovaSeq machines. Canaccord notes that fully "1/3 of ILMN's 95 orders in Q2" came from existing customers upgrading their equipment -- and this upgrade cycle is expected to run for more than two more years.

3. How far can Illumina run?

Of course, there's still the question of whether a stock, up 50% already this year, still has room to run. Canaccord's prediction of a 10% rise in stock price, after all, doesn't seem all that optimistic in a stock market where the average stock has gained nearly 10% a year over the past 50 years.

It's also worth pointing out that after making its big run earlier this year, Illumina stock is far from cheap. Valued on GAAP earnings, Illumina stock sells for more than 39 times earnings. Valued more conservatively on free cash flow, Illumina's valuation is even steeper -- nearly 71 times cash profits, using free cash flow data provided by S&P Global Market Intelligence. And against those valuations lie the analyst estimates, which S&P Global says circle average expectations of less than 15% annual earnings growth for Illumina over the next five years.

That works out to a PEG ratio of 2.7 for Illumina stock, and a price-to-free-cash-flow-to-growth ratio of nearly 5.

All that being said, it's worth pointing out that these same analysts projecting sub-15% earnings growth for Illumina were wrong about what the company earned last quarter. They could be wrong about the 15% forward growth rate as well.

What might they be getting wrong? Last week, fellow Fool and healthcare specialist Keith Speights laid out a series of 10 reasons Illumina "should only get better" as time goes on.

Among these were several of the reasons Canaccord cited in its write-up today -- the NovaSeq upgrades and new customer acquisitions, for example. But Keith also highlighted how Illumina is benefiting from burgeoning consumer interest in products such as gene testing from 23andMe, how new orders are probably coming down the pike as academic researchers receive approval of grant applications, and how other orders have already been placed and are working their way through backlog.

All of this suggests that when other analysts predict less than 15% growth in earnings at Illumina, they could turn out to be overly conservative. It's happened before -- last week, in fact -- and it could happen again.