While Domino's (NYSE: DPZ) has put up 25 straight quarters of domestic same-store sales growth, including a 9.5% increase in its most recent quarter, Pizza Hut has struggled. The Yum! Brands (NYSE:YUM) chain posted a global 1% drop in same-store sales and a 3% decline in the United States in the second quarter.

In a market where Domino's and Papa John's (NASDAQ: PZZA) can apparently do no wrong (Papa John's reported systemwide comparable sales increases of 1.4% in North America and 3.9% in international locations for the second quarter), Pizza Hut continues to flounder. That has prompted Yum! to once again take steps to reboot the brand. These efforts come only a few years after the chain's menu remake in late 2014, where it tried to go trendy by offering new crust flavors including Honey Sriracha, Salted Pretzel, and Ginger Boom Boom.

Those efforts proved to be a mistake. While Pizza Hut was focusing on trying to deliver the flavors of the moment, Domino's and Papa John's were working on technology. Both companies stepped up their digital game and made it significantly easier for people to get pizza.

It has become increasingly clear in the fast-food/fast-casual pizza space that "fast" has become the most important part of the game. It could be argued that Pizza Hut has long had the best pizza of the three (though all have their fans), but that has apparently not mattered much, as convenience, not quality, has driven consumer behavior. 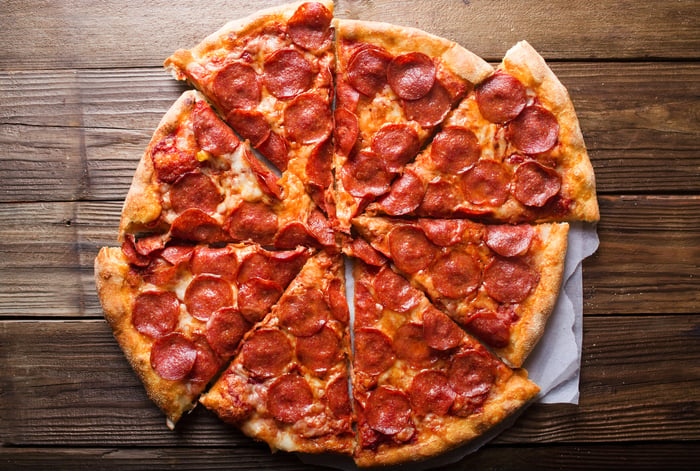 Pizza Hut has been fighting for a bigger slice of the pie in the U.S. Image source: Getty Images.

What is Pizza Hut doing?

U.S. Pizza Hut franchisees represent approximately 10% of Yum's operating profit, according to CEO Greg Creed's comments during his company's Q2 earnings call, which was transcribed by Seeking Alpha (registration required). Those operators have signed a new agreement with Yum! that will help the chain implement what Creed called a commitment to a digital, delivery-centric model.

Yum! will be increasing its ad spend with franchisees that agree to honor all advertised national prices through 2019 and to permanently increase their contributions to national advertising and digital fees.

"An additional benefit of the increased advertising is that the funds will be used toward national advertising, allowing the brand to increase its share of voice as it works to build awareness of its efforts around digital and delivery," said Creed.

By the end of 2017, Pizza Hut will have all its U.S. locations using one point-of-sale system. That will support the delivery-centric strategy, which will also be helped by the company's hiring of 14,000 drivers. In addition the chain has launched its first-ever U.S. loyalty program, Hut Rewards.

"This program is the only national pizza loyalty program that rewards online guests with points for every dollar spent on food," said Creed.

Even Creed does not expect overnight results, instead promising "improvement over time." The challenge for Pizza Hut is that competitors already have major leads when it comes to delivery, digital oredering, and overall convenience.

Everything Pizza Hut is doing makes sense, but it's very late to the party. Domino's and Papa John's already have dedicated customer bases using their apps, robust loyalty programs, and well-developed delivery systems. Pizza Hut may be able to catch up, but its changes really amount to putting its own spin on what has already worked elsewhere. That's a step in the right direction, but probably not enough for the company to make major inroads.