Ritchie Bros. Auctioneers (NYSE:RBA) had a strong 2016, driven in large part by the surge in demand for equipment tied to the oil and gas markets. Its stock jumped 46% during the year. 2017, however, has been virtually the opposite for RBA investors: The stock has slumped 20% year to date despite the company reporting better-than-expected second-quarter results. Let's take a look at the highlights from the company's second quarter and try to find out where this roller-coaster ride could be headed next.

I see your estimates and raise you

Investors initially walked away pleased with RBA's second quarter; RBA's revenue checked in at $166.2 million, which was higher than analysts' estimates calling for $163.4 million, per Thomson Reuters. That better-than-expected top-line result filtered down to the bottom line as well, with RBA's adjusted earnings per share checking in at $0.33, a full two pennies above analysts' estimates. The raw numbers show that RBA had a solid quarter and the market's initial response Tuesday was to push the stock roughly 10% higher before giving those gains right back the following day -- but here are some important details beyond the headline figures to be aware of. 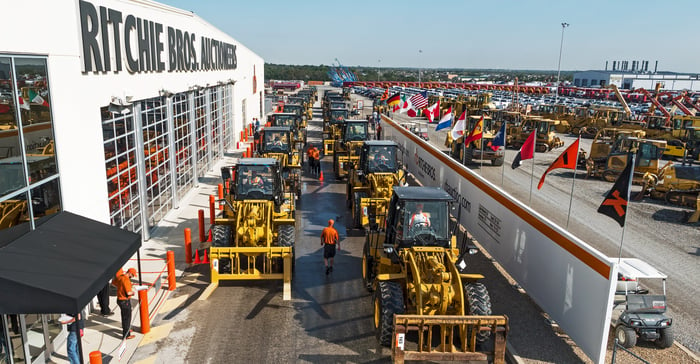 What goes into revenue matters

First, it's critical that investors understand RBA's top-line growth isn't organic, as the market remains challenging currently -- rather, the growth is from the company's IronPlanet acquisition. As you can see in the chart below, organic growth is slower in the near term. Management noted that the pressure in the markets, due to constrained equipment supply, will likely remain throughout 2017.

"Our results in the second quarter of 2017 were unfavorably affected by a severe shortage in supply of used construction equipment especially in the U.S. as end users achieved high levels of equipment utilization in state and local infrastructure projects. We expect supply to remain constrained in the second half of 2017," said Ritchie Bros. CEO Ravi Saligram in a press release. 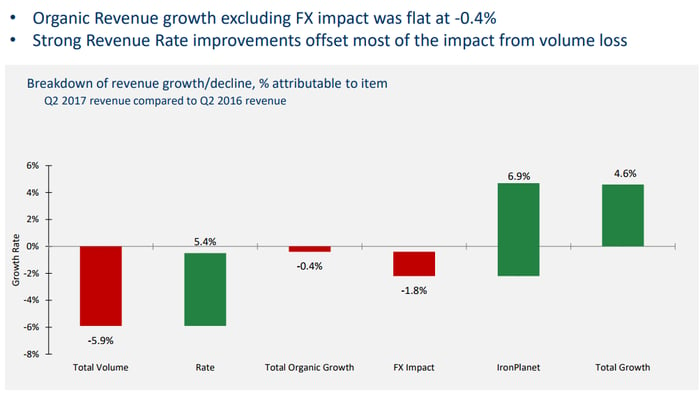 Despite the top-line pressure, there was a bright spot: revenue run rate. During the second quarter, RBA's revenue run rate increased to 13.2%, a 70-basis-point improvement from the prior quarter's 12.5%. If RBA can generate better revenue run rates, essentially earning more incremental revenue from the equipment sold at its auctions, it will help offset the lower volume.

Another important thing to note is that generating cost synergies from its IronPlanet acquisition is a critical task for the company, in order to achieve better margins and profits. So far, so good: Management appears to be starting off on the right foot with a smooth day-one strategy and significant progress during the first 60 days of implementation. Management expects to create run-rate synergies in excess of $10 million by the end of this year alone, and up to $20 million by the end of 2018. In addition, RBA has bulked up its sales force to proactively cross-sell its products, services, and financing through its expanding channels -- online, mobile, and live, among others -- which will help drive incremental revenue from its current customer base. At a time when the company faces tougher organic growth in the near term, integrating its acquisition smoothly and quickly will help fuel bottom-line growth, and that's a huge positive for those considering RBA as an investment.

Investors should take the recent news and data with a healthy dose of patience. During the second half of 2017, RBA will not only have to deal with the aforementioned macroeconomic headwinds as equipment supply remains constrained, but will also face tough comparisons from the prior year's largest ever two-day auction, in Columbus, Ohio, in the third quarter and a private treaty that management mentioned in the fourth quarter, both of which are nonrecurring.

Beyond those immediate headwinds, the road to full integration of IronPlanet will be a long one, and investors will need patience to see the benefits. More specifically, management is working on integrating the sales process, along with pricing and appraisal tools, and making services available across its platforms. But RBA needs to expand its IronPlanet assets internationally and enable customers to access all brands and services from one account. Then it has to integrate accounting systems and optimize workflow systems to continue creating cost synergies -- a long process that investors typically overlook, but will take some time to bear fruit between 2017 and 2019.

Still, if RBA can continue to drive strong results while not losing sight of its most important asset -- its massive customer base -- the long-term investment thesis for the stock will remain as strong as ever. No competitor comes close to matching RBA's size, operating scale, and global reach. And the company is only strengthening that competitive advantage, which is great news for investors.