Starting next month, Bank of America (NYSE:BAC) customers will no longer have to look elsewhere for a premium rewards card. The bank has announced that it will roll out its own offering in the popular credit card category in September, according to a report in The Wall Street Journal.

The card will charge a $95 annual fee. That may seem like a hefty price tag, but it's meaningfully below competitors like JPMorgan Chase (NYSE:JPM) and American Express (NYSE:AXP), which charge $450 and $550, respectively, for their analogous premium rewards cards.

Bank of America's Premium Rewards card offers the same litany of tiered rewards based on the type of purchase, giving cardholders the most points for money spent on travel and dining. But unlike these other cards, the exact size of the rewards will be conditioned on how much money customers have at the bank in checking, savings, and investment accounts.

To the untrained eye, this could seem like Bank of America's belated effort to jump on the premium rewards card train, so to speak, before it leaves the station.

American Express has long been the standard bearer in the premium credit card space. And when JPMorgan Chase joined the fray last year, the bank literally couldn't keep up with the demand for its Sapphire Reserve Card, which charged a $450 annual fee, but came with 100,000 bonus points -- which has since been cut to 50,000 points.

But this isn't quite right. The truth is that Bank of America's new premium rewards card goes nicely with the bank's more overarching strategy of capturing a greater share of its customers' wallets. 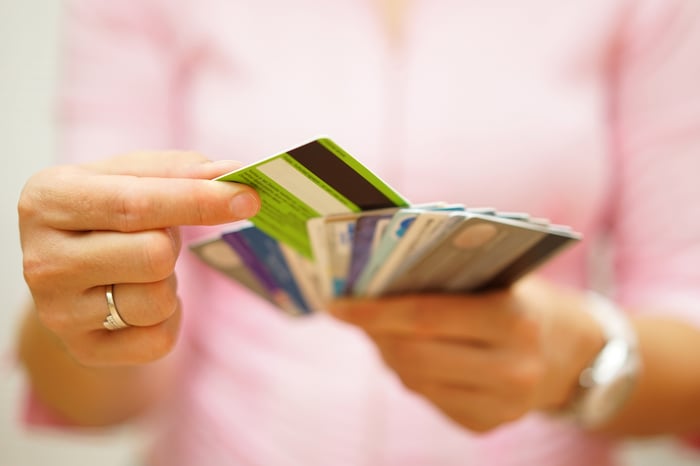 In the lead-up to the financial crisis, Bank of America was focused on growing through acquisitions. Under its former CEO, it bought two major banks, a wealth manager, a major credit card issuer, and a mortgage originator. And on the fateful weekend in September 2008 when Lehman Brothers failed, it purchased Merrill Lynch.

Since then, however, Bank of America has redirected its efforts exclusively to internal growth. Its CEO Brian Moynihan refers to this strategy as responsible growth.

This comes through in the design of its rewards tiers, tying the tiers to how much money a cardholder has in their accounts at Bank of America. This incentivizes users of the card to not only maximize their deposits at the bank, but it will also presumably translate into lower charge-off rates, as the most avid users are likely to maintain high balances of cash and other types of liquid assets with which to pay their credit card bills.

In short, while Bank of America may be the last of the major credit card issuers to jump into the premium rewards arena, it's doing so in a unique way that could benefit the bank more holistically.